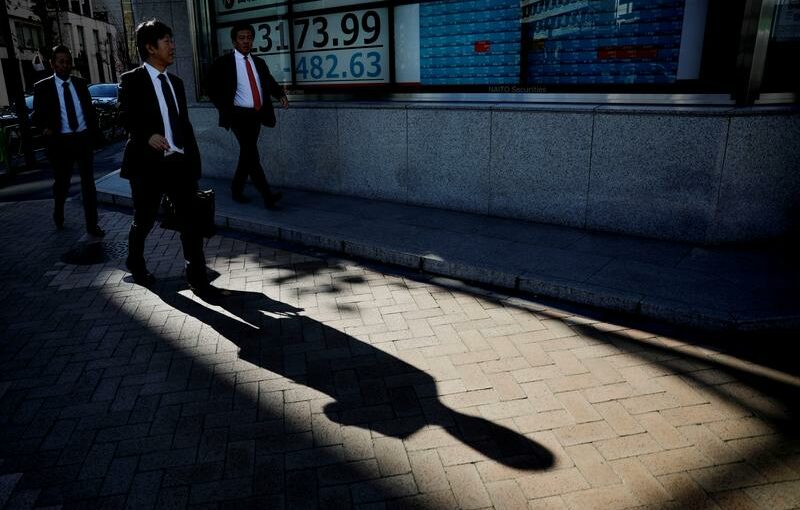 SYDNEY (Reuters) – Asian shares slid and the dollar held firm on Monday ahead of a week packed with no less than a dozen central bank meetings, highlighted by the Federal Reserve which is likely to take another step toward tapering.

FILE PHOTO: A man looks at a board showing stock prices outside a brokerage in Tokyo, Japan, January 6, 2020. REUTERS/Kim Kyung-Hoon

Holidays in Japan, China and South Korea made for thin conditions, and politics added extra uncertainty with elections in Canada and Germany bookending the week.

The fate of Chinese property giant Evergrande, and its $300 billion in liabilities, is also in the balance with a bond interest payment due on Thursday.

Concerns about the health of China’s economy and Beijing’s crackdown on tech firms continues to haunt the region, with stocks in Hong Kong skidding more than 3% to their lowest in almost 11 months.

MSCI’s broadest index of Asia-Pacific shares outside Japan slid another 1.4%, after shedding 2.5% last week, with Australia down 1.5%.

Japan’s Nikkei was shut, but futures were 400 points below the Friday cash close. The market could do with consolidating after surging to 30-year highs on hopes a new Prime Minister will bring more stimulus and policy change.

The Fed is still expected to lay the groundwork for a tapering at its policy meeting on Tuesday and Wednesday, though the consensus is for an actual announcement to be delayed until the November or December meetings.

Yields on 10-year Treasuries touched a two-month top and the curve flattened ahead of the meeting.[US/]

“A flatter yield curve suggests some fears the Fed may overdo the eventual hiking cycle,” cautioned Tapas Strickland, a director of economics at NAB.

He noted only 2-3 FOMC members would need to shift their “dot plot” forecasts for a hike in 2022 to make it the median, given seven of 18 had already tipped a move next year.

“The Fed will also have dots for 2024 which will give an indication of the steepness of the potential hiking cycle.”

The Norges Bank is expected to be the first in the G10 to raise interest rates.

Higher U.S. yields has combined with general risk aversion to benefit the dollar which was up near a one-month high at 93.303 on a basket of currencies.

It was range bound on the yen at 109.96, while the euro was near its lowest in three weeks at $1.1717 in part on uncertainty ahead of Germany’s election this weekend.

Canada goes to the polls on Monday with the race too close to call.

The firmer dollar weighed on gold, which was pinned at $1,749 an ounceafter losing 1.9% last week.

Oil prices eased as energy companies in the U.S. Gulf of Mexico restarted production after back-to-back hurricanes in the region shut output. [O/R]