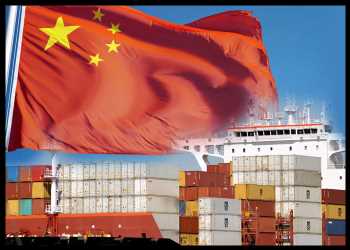 China’s exports declined at a faster pace at the end of the year as the global demand weakens amid fears of a recession, and also due to the domestic pandemic-related restrictions that continued to disrupt the industrial activity.

The annual decline in exports worsened to 9.9 percent in December from 8.9 percent in November, the General Administration of Customs reportedly said Friday. The year-on-year fall was almost in line with economists’ forecast of -10.0 percent.

At the same time, imports eased 7.5 percent from a year ago, which was slower than the 10.6 percent drop registered in November, and also the expected decrease of 9.8 percent.

As a result, the trade balance showed a surplus of $78 billion, which was larger than the forecast of $76.2 billion.

With the economic growth outside of China slowing, exports are set to continue to contract until the middle of the year, Capital Economics economist Zichun Huang said.

However, the economist said the rapid fading of virus disruptions as China adapts to living with COVID-19, along with broader policy support, will drive a sharp recovery in domestic demand that will lift imports.

Despite the weakening demand from the US and Europe, China’s exports increased 7 percent from a year ago, taking the trade surplus to a record $877.6 billion. Imports grew only 1.1 percent in 2022.

The Purchasing Managers’ survey, released on January 5, showed that Chinese business activity shrank for the fourth consecutive month in December and overall new export business contracted the most since September.

Earlier this week, the World Bank said activity in China remains vulnerable to a prolonged drag from the real estate sector and continued pandemic-related disruptions. The lender forecast China’s economy to expand 4.3 percent in 2023 and 5.0 percent next year.