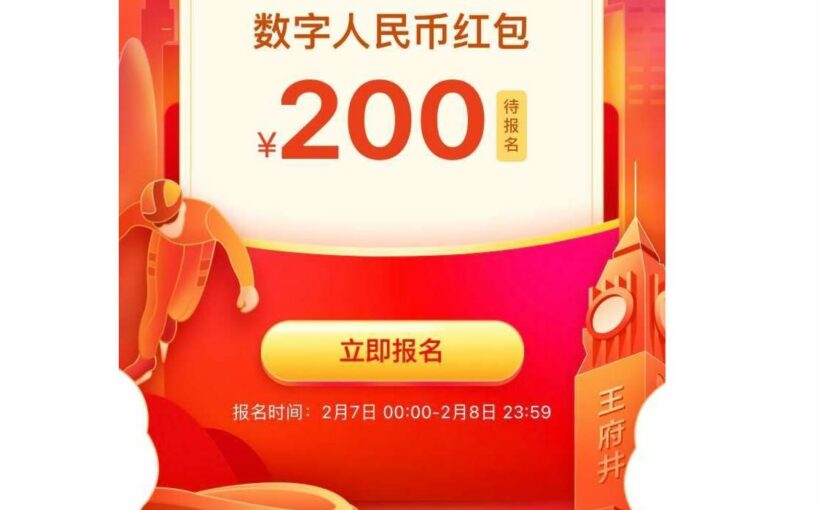 With its entry into the still-sparsely populated world of central bank digital currency, China takes a society that already leans heavily on electronic payments and mainstreams it. This also gives the government a crystal ball into its citizens' spending habits and lends the nation's currency an edge on the global stage.

On an even larger level, the move raises concerns that the yuan is now an even bigger challenger to the U.S. dollar, which enjoys a status as the world's reserve currency in which much of international commerce is denominated.

However, Federal Reserve officials have been walking delicately into the digital currency arena, and that's not expected to change even with the added heat coming from China.

Fed Chairman Jerome Powell recently said the central bank won't be doing anything in that regard without congressional approval. A joint project between the Boston Fed and MIT remains in early stages.

"I just really don't think it changes that much, to be honest. It's two very different systems that you're dealing with between the U.S. and China," said David Grider, head of digital assets research at Fundstrat. "I don't necessarily think this changes the dynamics for the dollar's role in the world, which is probably one of the reasons [Powell is] not in such a hurry."

Still, the U.S. risks falling behind the world globally if it ignores the disruptive nature of digital currencies.

Less than a decade ago, it seemed unlikely that bitcoin and its peers would ever be anything more than a curiosity. Now the various cyber currencies are approaching a collective $2 trillion market cap, according to CoinMarketCap, which tracks the sector's value.

The benefits of adoption

They provide access to the financial system for people who can't afford accounts or otherwise don't have access to banks.

At a time when digital transactions already are expected to total $9 trillion globally in just a few years, development would allow governments to catch up to what's already been happening around the world with payment systems like WiPay, AliPay and SwiftPay.

But there also are privacy concerns. Central bank digital currencies don't work like bitcoin and other cryptocurrencies, as transactions would not be anonymous. Fed officials have expressed concern over privacy issues and implementation.

That hasn't stopped global interest in digital currencies, though.

At the very least, China's lead in the central bank digital currency space somewhat breathes down the neck of the dollar when it comes to cross-border payments.

That influence is more likely to be felt in the immediate Asian sphere where China already dominates.

The digital development also provides an insurance policy for China that should it run afoul of global regulations and find itself the subject of sanctions, it will still have a way to transact business.

Getting more nations on board to facilitate cross-border payments through a multiple central bank digital currency bridge—or m-CBDC—"could enhance [China's] regional influence over time," Adarsh Sinha, currency strategist at Bank of America, said in a note to clients. "Ultimately, this is likely to be the actual (and more realistic) objective for China than any serious attempt to displace the [U.S. dollar's] status as the global reserve currency."

China will need a "compatible and coordinated system" to use the People's Bank of China's digital currency, and there already are signals from other central banks that a move into the field is imminent, Sinha added.

There are signs of movement elsewhere.

Thailand, for instance, will begin testing its own retail digital currency for the public next year, with designs on full implementation in the next three to five years.

This week, Japan also began experimenting with ways to integrate a digital currency into its system.

In the U.S., though, the level of urgency seems lower.

Nick Colas, co-founder of DataTrek Research and, in a prior job, the first Wall Street analyst to write about bitcoin, said a recent survey of clients showed only a middling level of enthusiasm for a central bank digital currency in the U.S.

A client base of about 300 with a penchant for disruptive technologies was about evenly divided on whether the Fed should accelerate its CBDC timeline, Colas said.

"Investors hear the Fed somewhat reluctantly talking about CBDCs, hear them talking about the risks, and they're kind of internalizing that and saying, 'if the Fed sees risks, maybe we shouldn't go so fast on it," Colas said. "People have picked up on the fact that the Fed is struggling with the issue, and if the Fed is struggling with it, it's not something to rush into."

To be sure, there are voices calling for swifter action from the central bank.

Global payments processor Ripple, which issues its own XRP coin, authored a report strongly encouraging the U.S. to move forward.

The firm pointed out, among other things, that getting emergency rescue payments to individuals in the early days of the Covid-19 pandemic would have been much easier with a digital currency at the government's disposal.

"[Central bank digital currencies] have enormous potential but must first overcome numerous challenges," the Ripple report said. "Now is the time for Central Banks to explore these issues, develop common solutions and ensure that the next evolution of money benefits more people and businesses and makes the world better."

But the Fed is likely to continue taking its time, despite questions over whether China's move threatens the U.S. and the dollar's global standing.

"Now and for the next five years, it doesn't," Colas said. "Past five years, if China's economy continues to grow as it has for the last 10, if their portion of global trade stays as it has and people start to adopt it, long-term, sure [it's a threat]. But it's not a near-term risk."