Home » Business » China To Have Up To 700 Nuclear Warheads By 2027 To Fight ‘strong Enemy’: Pentagon Report 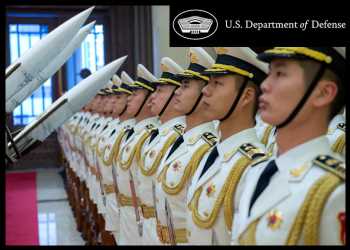 The U.S. Defense Department’s annual report on military and security developments involving China says that country will have developed up to 700 deliverable nuclear warheads by 2027.

A key revelation in the report is China’s advancements in its nuclear capability.

The accelerating pace of the People’s Liberation Army’s nuclear expansion may enable the PRC [People’s Republic of China] to have up to about 700 deliverable nuclear warheads by 2027,” says the report, commonly referred to as the China Military Power Report. It also states that the PRC likely intends to have at least 1,000 nuclear warheads by 2030 — exceeding the pace and the size that the Pentagon projected in the 2020 China Military Power report.

The report also reveals that China may have already established a “nuclear triad” with the development of a nuclear-capable, air-launched ballistic missile and the ability to launch such missiles from the ground and sea.

“The report provides a baseline assessment of the department’s top pacing challenge, and it charts the modernization of the PLA throughout 2020,” a US Defense official said Tuesday. “This includes the PLA developing the capabilities to conduct joint, long-range precision strikes across domains; increasingly sophisticated space, counterspace and cyber capabilities; as well as the accelerating expansion of the PLA’s nuclear forces,” he added.

New to the report this year is a section on the Chinese military’s chemical and biological research efforts. It says China has engaged in biological activities with potential dual-use applications, which raises concerns regarding its compliance with the Biological and Toxins Weapons Convention and the Chemical Weapons Convention.

The report concludes that China continues to be clear in its ambitions to be competitive with world-class military powers.

The PLA’s evolving capabilities and concepts continue to strengthen its ability to fight and win wars, against what Beijing refers to as a ‘strong enemy’ — a phrase that appears in their publications. “And a ‘strong enemy,’ of course, is very likely a euphemism for the United States,” according to the Defense official.

According to the report, a big part of China’s effort to match the strength of a “strong enemy” involves major modernization and reform efforts within its army. Those efforts include an ongoing effort to achieve “mechanization,” which the report describes as the Chinese army’s efforts to modernize its weapons and equipment to be networked into a “systems of systems” and to also utilize more advanced technologies suitable for “informatized” and “intelligentized” warfare.

Also of significance are China’s efforts to project military power outside its own borders.

The official said China’s army has sought to modernize its capabilities and improve its proficiency across all warfare domains, so that, as a joint force, it can conduct the range of land, air, and maritime operations that are envisioned in army publications, as well as in space, counterspace, electronic warfare and cyber operations.