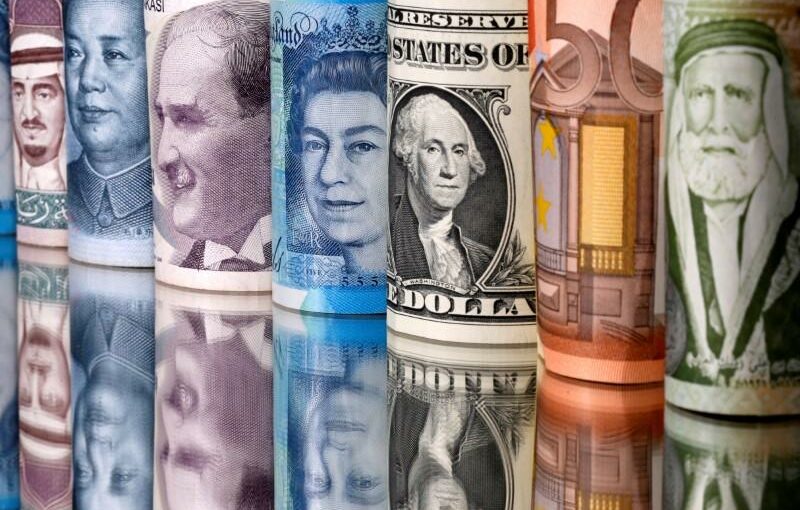 The euro, which has a heavy weighting in the dollar index, plunged 1.05% against the greenback – the most since at least June.

The fall in the euro more than reversed its big gain the day before and came as traders tried to sort through inflation reports and central bank comments to divine the course of interest rates for different currencies.

The euro also fell against the British pound by 0.4% and the Swiss franc by 0.7%.

Volatility in the foreign exchange and interest rate markets has increased throughout the week around central bank actions and economic data. Next week could bring more of the same around policy meetings of the U.S. Federal Reserve, the Bank of England and the Reserve Bank of Australia.

“A source of volatility could be this discrepancy between what the markets are saying and what the central banks are saying,” said Marc Chandler, chief market strategist at Bannockburn Global Forex.

Another reason for the volatility, Chandler and others said, was month-end portfolio repositioning on the day of the week when markets tend to be the least liquid.

“It is the end of the month and it is Friday,” said Axel Merk, chief investment officer at Merk Investments in Palo Alto. Some of the trades were likely “window-dressing” so that month-end portfolios would not show so much leverage, he said.

U.S. Treasury yields rose after the government’s index of core personal consumption expenditures – the Fed’s preferred inflation measure – climbed at a 4.4% annual rate in September, continuing a run of inflation at levels not seen in 30 years.

U.S. interest rate markets have been unusually volatile as traders prepare for the Federal Reserve to raise rates around mid-2022.

European data on Friday showed inflation in the 19 countries sharing the euro rose to 4.1% in October from 3.4% a month earlier, beating a consensus forecast of 3.7% and creating a policy dilemma for the European Central Bank.

Germany’s 10-year bond yield rose on Friday as much as 8 basis points to its highest level since May 2019 and Southern European government bond yields surged.

ECB President Christine Lagarde’s failure during a Thursday press conference to push back against market expectations of higher interest rates has brought out bears, with Danske Bank strategists expecting the euro to fall to $1.10 over the next 12 months.

“Investors are just not buying what the ECB is saying,” said Marios Hadjikyriacos, a senior investment analyst at brokerage XM. Markets are betting that inflation will force the ECB to pull back on asset purchases sooner than planned.