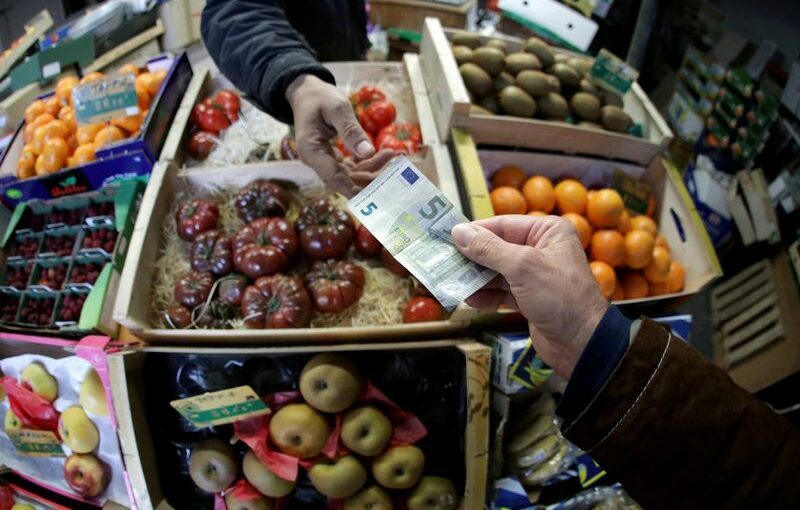 FRANKFURT (Reuters) -Euro zone inflation surged to a 10-year-high in August with further rises likely, challenging the European Central Bank’s benign view on price growth and its commitment to look past what it deems a temporary increase.

FILE PHOTO: A shopper pays with a euro bank note in a market in Nice, France, April 3, 2019. REUTERS/Eric Gaillard

Consumer inflation in the 19 countries sharing the single currency accelerated to 3% this month from 2.2% in July, far above expectations for 2.7% and moving well clear of the ECB’s 2% target.

The increase was fuelled by energy costs, but food prices also surged, while there were unusually large increases in the prices of industrial goods too, according to Eurostat, the EU’s statistics agency.

Markets mostly shrugged off the data, with stocks rising and yields increasing just a basis point or two, suggesting the narrative of temporary inflation and ultra-easy central bank policy for years to come remains the central one.

Still, the numbers are likely to make for uncomfortable reading at the ECB.

The central bank has repeatedly raised its inflation projection this year only for the actual numbers to beat its forecasts, and price growth now seems likely to peak only in November.

With inflation in Germany, the euro zone’s largest economy and the ECB’s biggest critic, expected to approach 5% in coming months, the bank is likely to come under increasing public pressure to address price developments that are reviving long-dormant memories of runaway prices.

The ECB argues that a slew of one-off factors including production bottlenecks related to the economy’s reopening after the COVID-19 pandemic account for the bulk of the inflation surge, and that price growth will quickly moderate early next year.

“The effects of re-opening and supply problems could intensify in the next few months. But we suspect that they will begin to fade next year as global consumption and trade patterns return to something like their pre-pandemic norms,” Capital Economics said in a note.

“We think the headline rate will drop to about 2% in January and trend down throughout 2022 to end next year at around 1%,” it added.

Longer-term market based inflation expectations [EUIL5YF5Y=R] are also holding well below 2%, even if they have moved steadily higher this year.

ECB policymakers agree and predict that inflation will languish well below the bank’s target for years to come, so they even reinforced their commitment last month to keeping monetary policy exceptionally loose to generate price pressures.

Speaking to Reuters last week, ECB chief economist Philip Lane argued that these inflation surprises still did not challenge his views about the temporary nature of price pressures as wage growth, a necessary component of durable inflation, remained muted.

While ECB policymakers are acknowledging that they underestimated price pressures in the near term, they continue to point to weak underlying inflation readings as supporting evidence for loose policy.

Core inflation, however, also surged in August with inflation excluding volatile food and fuel prices accelerating to 1.6% from 0.9%, while an even narrower measure that also excludes alcohol and tobacco, rose to 1.6% from 0.7%.

The ECB will next meet on Sept. 9 and must decide on the pace of its bond purchases over the coming quarter. While some adjustment is possible, Lane argued that it would be at the margins as the ECB is committed to maintaining “favourable financing conditions”.

After Tuesday’s reading, not all observers are quite so sanguine.

“This is not to say that there is no upside risk to the inflation outlook,” ING economist Bert Colijn said. “So hold tight: inflation has the potential to go higher from here.”