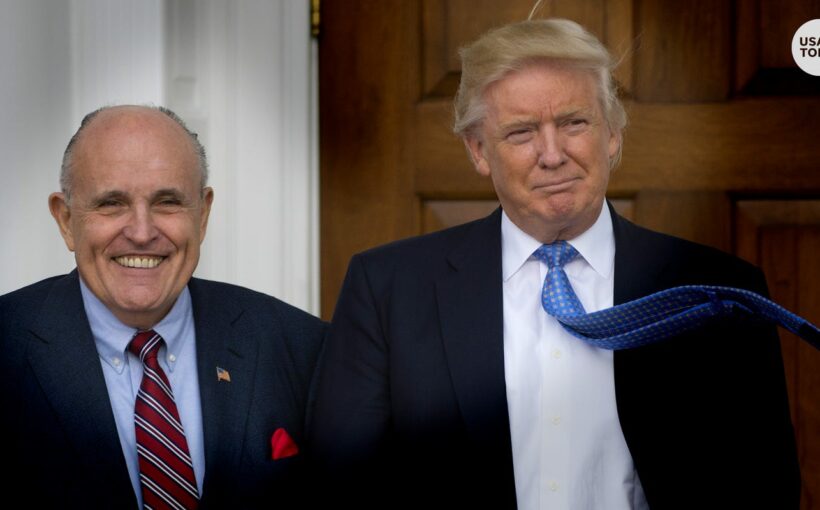 The image, shared the same day, shows a smiling woman in a fur coat holding a glass of wine. “Rudy Giuliani’s neighbors watching the FBI raid,” says the caption.

FBI agents raided Giuliani’s Manhattan apartment and offices on April 28 amid an investigation of his business dealings in Ukraine. The investigation has been ongoing since early 2019.

The image has been shared nearly 400 times on Facebook, however, it does not show Giuliani’s neighbors.

USA TODAY reached out to the user for comment.

The image was first shared by The Daily Mail in 2017 as part of a series of photographs from a dance party protest in the Kalorama neighborhood in Washington, D.C.

The original image shows Dianne Bruce, the woman in the fur coat, and other residents taking pictures of the protesters.

A Facebook event said the protest, held the evening of April 1, was a “Queer dance party for Climate Justice.” The description told protesters they would meet at Dupont Circle and walk to Ivanka Trump’s house in Kalorama to “send the clear message that our climate and our communities matter.”

“It was about people getting everyone together because they feel frustrated, and they all had big smiles on their faces. It was a celebration of freedom really and truly,” Bruce told Time in an interview.

Fact check: Quote attributed to Virginia Woolf was in a movie, not her primary work

USA TODAY didn’t find any pictures or videos of Giuliani’s neighbors during the raid. One neighbor told reporters the FBI “took a lot of stuff.”

The image of Bruce wearing a fur coat while drinking wine caught social media users’ attention, as they created and shared memes that made the image go viral in the days following the 2017 protest.

One Twitter user used the photo and added the caption: “Me: I hate drama. Me when there’s drama.” It has been retweeted roughly 1,800 times.

Other users identified themselves with Bruce.

“I’m the woman in the fur coat drinking wine,” one user said.

“Loving the vibe of the woman in a fur coat drinking white wine at a protest,” another one said.

And writer Gabe Ortíz tweeted: “The neighbor watching the LGBT protest in front of Ivanka Trump’s house while drinking white wine is definitely invited to gay brunch.” Ortíz’s post has been retweeted  more than 3,000 times.

We rate the claim that an image shows neighbors watching as FBI agents raided Rudy Giuliani FALSE, based on our research. The image was taken during a protest in Washington, D.C., in 2017, and shows a woman watching outside her home in a fur coat drinking wine.