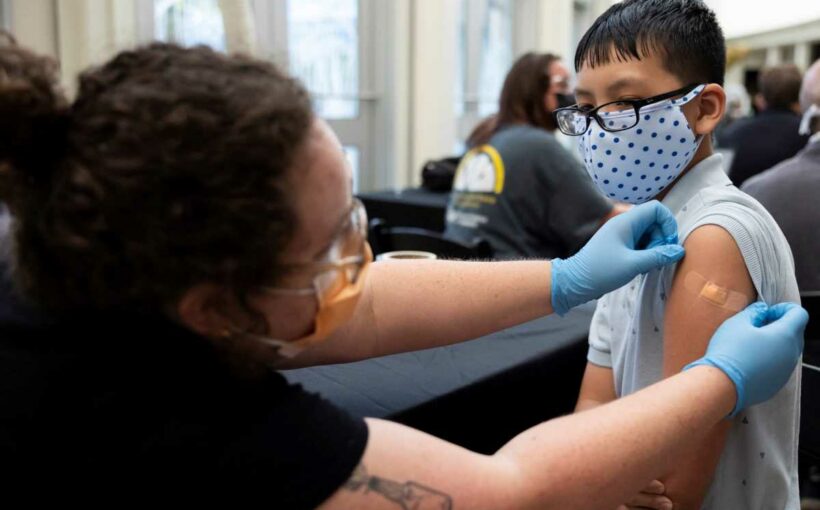 The Food and Drug Administration authorized Pfizer and BioNTech's Covid-19 booster shots for people 65 and older and other vulnerable Americans six months after they complete their first two doses, making many Americans eligible to receive the shots now.

The FDA's decision largely follows recommendations given Friday by its key vaccine advisory committee at a more than 8-hour agency meeting. The Vaccines and Related Biological Products Advisory Committee voted 16-2 against distributing the vaccines to Americans 16 and older, before unanimously embracing an alternate plan to give boosters to older Americans and those at a high risk of suffering from severe illness if they get the virus.

Though Americans 65 and older make up roughly 17% of the U.S. population, they are the most at risk of dying from Covid, accounting for more than 77% of all Covid deaths, according to the Centers for Disease Control and Prevention.

The FDA granted emergency use authorization to administer Pfizer's shots to older Americans and people from 18- to 64-years-old with medical conditions that place them at risk of getting severely sick. The agency also included a broad definition of people from 18 to 64 "whose frequent institutional or occupational exposure" to the virus place them at a high risk of developing serious complications from Covid. That leaves enough wiggle room for the CDC to potentially clear third doses for people in nursing homes, prisons, front-line health employees and other essential workers who were among the first Americans who got the initial shots in December.

"The FDA considered the committee's input and conducted its own thorough review of the submitted data to reach today's decision," Dr. Peter Marks, the agency's top vaccine regulator, said in a statement. "We will continue to analyze data submitted to the FDA pertaining to the use of booster doses of COVID-19 vaccines and we will make further decisions as appropriate based on the data."

The nonbinding decision by the vaccine advisory committee was expected to be a controversial one as the Biden administration has said it wants to begin offering booster shots to the general public as early as this week, pending authorization from U.S. health regulators.

While the agency hasn't always followed the advice of its committee, it often does. Still, Marks reminded the panel on Friday that federal regulators did not have to accept its recommendation as written.

Average daily U.S. Covid deaths climb above 2,000 for the first time since March

"We are not bound at FDA by your vote, just so you understand that. We can tweak this as need be," he said.

Friday's vote put the FDA panel in an "awkward position" as the administration has already announced they would begin distributing boosters to the general public this month, Northwell Health chief of infectious disease Dr. Bruce Farber said prior to the panel's recommendation.

Some committee members said they were concerned that there wasn't enough data to make a recommendation, while others argued third shots should be limited to certain groups, such as people over age 60 who are known to be at higher risk of severe disease. Some members raised concerns about the risk of myocarditis in younger people, saying more research is needed.

Phil Krause, an FDA vaccine regulator who is leaving the agency over pressure from the Biden administration to approve the shots, was critical of the findings presented at the meeting, saying much of the data had not been reviewed by the federal agency or peer-reviewed. He said the models used were complex and scientists have to ensure it "is giving you the correct results."

"That's part of the difficulty at looking at this kind of data without having the chance for FDA to review it," he said.

In outlining plans last month to start distributing boosters as early as this week, administration officials cited three CDC studies that showed the vaccines' protection against Covid diminished over several months. Senior health officials said at the time they worried protection against severe disease, hospitalization and death "could" diminish in the months ahead, especially among those who are at higher risk or were vaccinated during the earlier phases of the vaccination rollout.

Pfizer said In documents made public last week that an observational study in Israel showed a third dose of the Covid vaccine six months after a second shot restores protection from infection to 95%. The data was collected from July 1 through Aug. 30 when the fast-spreading delta variant was surging throughout the country.

In a presentation Friday, Dr. Sharon Elroy-Preiss of Israel's Health Ministry argued that if officials there had not begun distributing boosters at the end of July, the nation likely would have exceeded its hospital capacity. Health officials began to see a trend, she said, of individuals in their 40s and 50s who were fully vaccinated become critically ill with Covid.

"We didn't want to wait to see those results and we knew that we needed to vaccinate a larger portion of the population in order to get the numbers down quickly," she told the committee. Israeli health authorities expected severe cases to average 2,000 by late August, she said. "We were able to dampen that effect and our severe cases are roughly 700 or less and have stayed stable, even though we still have days at 10,000 confirmed cases."

The FDA OK is not the final go-ahead. The CDC's vaccine advisory committee held the first day of a two-day meeting Wednesday to debate the third shots with a vote on the FDA's proposal scheduled Thursday afternoon. If they issue a recommendation and it is approved by the CDC, booster shots could begin immediately.