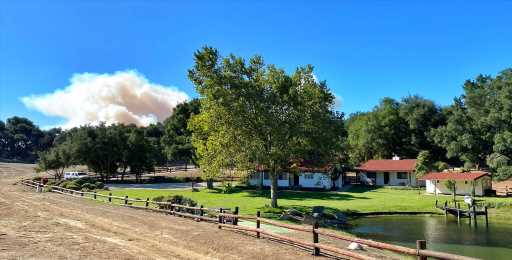 Fire crews are working to protect the ranch once owned by Ronald Reagan amid the rapidly moving Alisal Fire in Santa Barbara County.

The 688-ranch, Rancho del Cielo, served as the vacation home for Reagan and wife Nancy Reagan while he was president. The fire has been burning to the northwest of the ranch.

The Reagans bought the ranch in 1974, as his term as governor was ending. It served as a western White House during his presidency, hosting a number of world leaders. The property was sold to the conservative Young America’s Foundation in 1998.

The foundation said that as of noon PT, the fire was burning in Refugio Canyon below the ranch.

“YAF leadership is working with Congressional allies and other leaders who are their offering support in acquiring resources to help fight this fire,” the foundation said in a statement, adding that there were several fire engines on the property and fire retardant was being sprayed around the structures. The foundation also was working to provide access to emergency crews to two lakes at the ranch that contain more than one million gallons of water.

Scott Walker, the former Wisconsin governor who is president of the foundation, said in a statement that they have “taken the necessary steps, as much as a property owner can do, to shield Rancho del Cielo from this very threat. I have confidence our team and the emergency crews will do everything they can to protect Rancho del Cielo and the surrounding area.”

Before Reagan became governor, he and his wife also owned a ranch in the Santa Monica mountains near Mulholland Highway and Cornell Road. The 2018 Woolsey fire swept through the property, now part of Malibu Creek State Park.