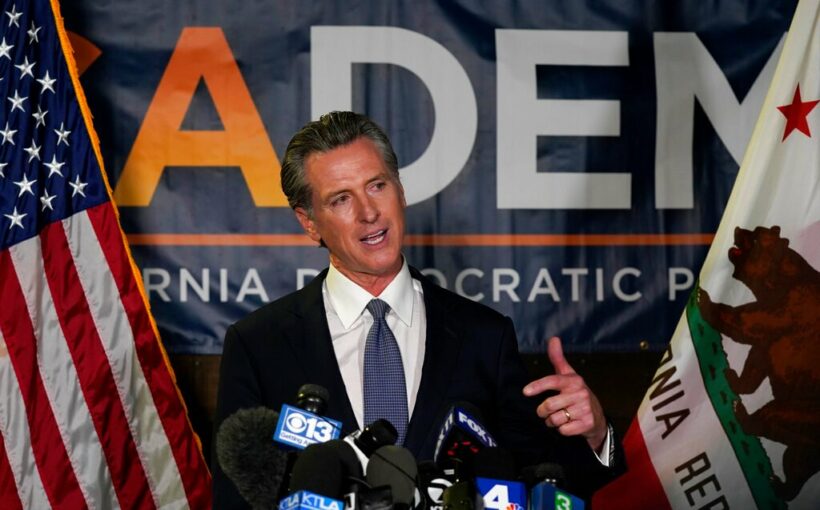 California Governor Gavin Newsom said that the state’s voters, in soundly defeating a recall effort, were rejecting cynicism and division in politics.

Newsom not hold an election night party but instead gave brief remarks at California Democrats Party headquarters in Sacramento, using his speech to more soberly push back at what he said was negativity that will have an impact on younger generations.

“I just think of our kids, watching all of this, nightly news, day in and day out,” Newsom said. “I got four young kids, the oldest is about to turn 12 this weekend, and what they are growing up to. A where where we are so divided, these kids increasingly fearful, isolated, disconnected. And we’re teaching them that. It doesn’t have to be that way. I think we owe our kids a deeper sense of respect and all of us as adults have a responsibility to disregard the false separateness.”

He also chided former President Donald Trump for suggesting that the election was rigged, even before the votes had been counted. “Democracy is not a football. You don’t throw it around,” Newsom said.

With a war chest of about $70 million, including $3 million from Netflix’s Reed Hastings, Newsom enjoyed a large financial advantage.

He’s likely to see his victory as an affirmation of his Covid-19 policies, as exit polls said that the coronavirus was the number one issue in the state. But it also may be a roadmap for him and other Democrats going into next year’s midterm elections, in that they will embrace Covid-19 restrictions as an electoral winner . Newsom leaned into the need for mask and vaccine mandates as a way to curb the pandemic, contrasting his position with that of Larry Elder, who said that he would roll the restrictions back.

Newsom said at the end of his speech, “I’m reminded a few decades ago someone told me, when describing a difficult or challenging moment. He said, the world is too small. Our time is too short. And our wisdom is too limited to win fleeting victories at other people’s expense. We must all triumph together. So in that spirit of recognizing and reconciling this moment, and try to understand what’s going on not just here in the state but all across the United States of America, I just want to say this. Tonight I’m humbled, grateful but resolved in the spirit of my political hero, Robert Kennedy, to make more gentle the light of this world.”