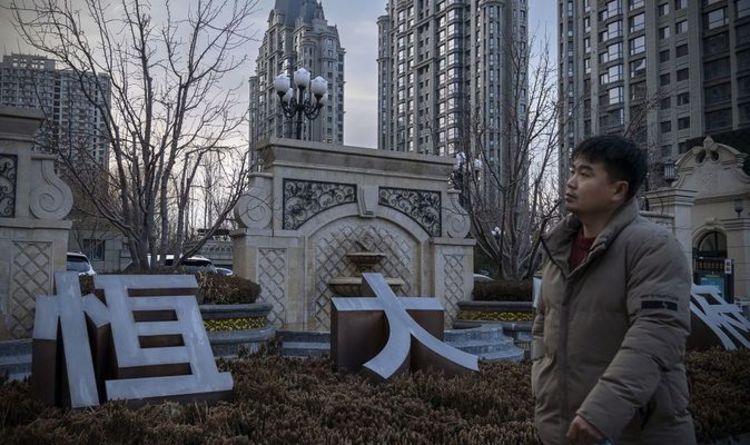 The world’s most indebted property developer has more than $300bn (£224.67bn) worth of liabilities and has been missing payment deadlines on its debt bonds, triggering 30 day grace periods each time. Evergrande had narrowly made these until finally missing payment on December 9. In a filing to the Hong Kong stock exchange today, the company said: “In view of the risks the Group is currently facing, the Risk Management Committee of China Evergrande Group is utilizing its extensive resources and will actively engage with the Group’s creditors in order to mitigate the Group’s risk and protect the legitimate interest of the parties.” The committee was formed earlier this month in the wake of the default and includes Evergrande chair Hui Ka Yan.

It also had oversight from the local Guangdong government.

The aim so far has been to mitigate risks for the group as officials seek what’s been described as a “managed implosion” for Evergrande.

In a bid to raise cash to manage its debts, the group has been selling off assets, a move other struggling developers have also turned to, resulting in a decline in house prices in China.

House prices were down 0.33 percent in November, the largest drop since 2015.

Evergrande was joined by developer Kaisa in defaulting this month in further evidence of the strains on China’s property sector.

Kaisa resumed trading in its shares this week having suspended them on the Hong Kong stock exchange following its default.

Like Evergrande, it is also now in discussion with creditors over restructuring and has hired investment bank Houlihan Lokey as an adviser.

The bank is also working for Evergrande.

In a report this week on outlook for 2022, Pantheon Macroeconomics wrote: “The spread of financial stress from high yield borrowers like Evergrande and Kaisa, to investment grade counterparts like Shimao, is a sign of things to come.

“As more dominoes fall, the stress will become more evident in the financial sector, where banks and shadow banks alike are already retrenching.”

With property counting for a major share of China’s GDP, the debt crisis facing the sector is increasingly acting as a drag on growth.

However, the report suggests Chinese authorities have so far refused to depart from restrictions on debt which have increased pressure on firms.

The arrival of Omicron is also predicted to be a major headwind to growth next year, thanks in part to China’s zero-Covid policies which has already prompted the closure of factories.

Reflecting these issues, Pantheon predicts China’s GDP will fall to 4.7 percent from a predicted 7.5 percent for this year.