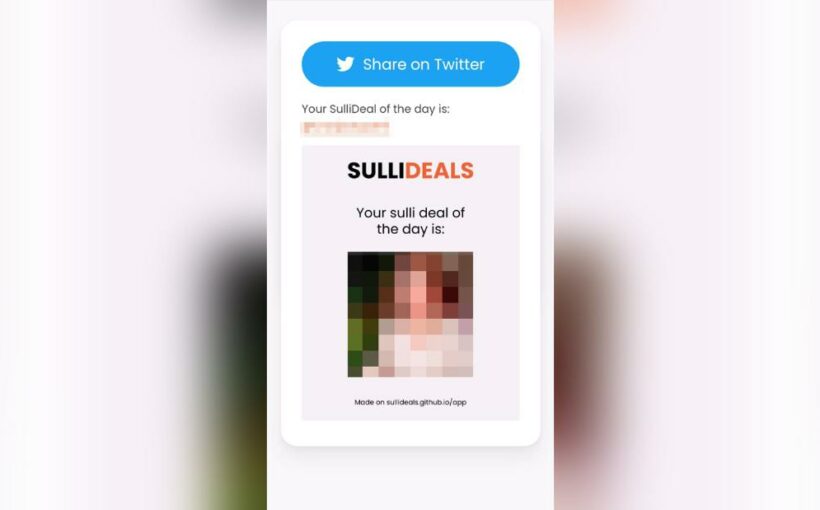 New Delhi (CNN)Hana Mohsin Khan says she knows why she was targeted on a website that appeared to offer her for sale.

“(It’s) because of my religion. Because I am Muslim,” she said.
In early July, the 32-year-old pilot and proud feminist was among more than 80 Muslim women — journalists, writers and influencers — whose photos were posted on a mock app called Sulli Deals, a derogatory term for Muslim women typically used by right-wing Hindu men.
Users were offered a chance to “buy” the women like commodities in an auction — and while the women weren’t actually for sale, they say it left them scared, traumatized and angry.

I don’t use my surname in Uber and Ola.
I have a religion neutral first name.

Am I hiding my Muslim identity?

Yes…you bet I am.

Two months later, the site has been taken down by US-based platform GitHub, but the women are still angry none its creators have been detained or arrested. They say the lack of action highlights the discrimination Muslim women face in Hindu-dominated India, where outspoken advocates of women’s rights are singled out for attack on social media.

They say they won’t be silenced.
Khan’s complaint is one of at least four filed with Indian police by victims, opposition lawmakers and activists. Praveen Duggal, a senior official for Delhi police, confirmed India’s cyber cell unit is investigating the complaints, but said he could not share any further details because it was a “sealed matter.”
India has laws targeting cyber crime, but it doesn’t have a specific legislation against cyber bullying, despite a surge in abuse directed at Indian women.
Khan and other feminist activists say they are being targeted by men hiding behind handles on social media, who are attempting to intimidate them — and Indian authorities aren’t doing enough to stop it. 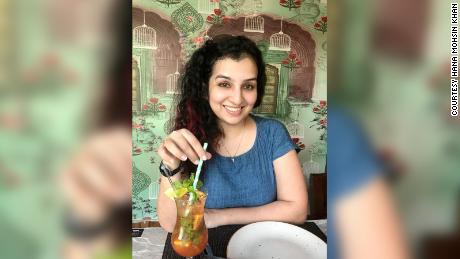 Besides their religion, one thing the women share is their strong view on gender rights in India.
By most global measures, the country performs poorly on gender equality. Fewer than a quarter of Indian women are in the labor market, and even then they earn about 20% of a man’s wage, according to the World Economic Forum’s Global Gender Gap 2021 report.
Violence against women remains a problem, with more than one in four women abused or controlled by her partner during her lifetime, the report added.

“Men are threatened by women who are assertive in our country.”Hana Mohsin KhanPilot

No explicit threats of violence were made against the women on the Sulli Deals app, but they say the publication of their Twitter handles with photos copied from their social media accounts was an invitation for abuse.
Khan has 15,000 followers on Twitter and regularly receives hateful comments — primarily from men. She said the volume increased after her photo appeared on the app.
“Men are threatened by women who are assertive in our country,” she said. “And vocal, outspoken Muslim women are the biggest level of threat in their eyes.”
Of India’s 580 million women, approximately 6.5% are Muslim, according to the most recent government census conducted in 2011.
After the “auction” photos went viral on social media, 21 of the women joined a WhatsApp group one of them created for mutual support, including poet Nabiya Khan. 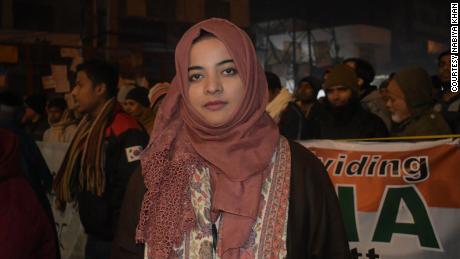 Nabiya Khan regularly posts her prose to Twitter to amplify the voices of marginalized people in India, which she believes caught the attention of the Sulli Deals trolls.
“Men think sexual violence is a valid punishment (for being an outspoken woman),” said Nabiya Khan, who is no relation to Hana Mohsin Khan.

When i say Muslims, i am speaking for myself here. We might be tired but we will never give up.

She has also lodged a complaint with police but says she hasn’t heard anything.
“I was expecting that my complaint would be met with dignity but seeing that no step has been taken in the direction of justice, it just makes me angry,” she said.

The women say the online abuse is indicative of the mood towards Muslims in India since Prime Minister Narendra Modi’s Bharatiya Janata Party (BJP) came to power in 2014.
In recent years, reports of anti-Muslim hate crimes have increased and several BJP-ruled states have passed legislation that critics say has contributed to a rise in religious polarization.
For example, in 2019, India’s parliament passed a bill that would give immigrants from three neighboring countries a pathway to citizenship — except for Muslims.
Anti-Muslim bias is also present in the police force, according to a survey of about 12,000 police officers. The 2019 Status of Policing in India report found about half of the Indian police surveyed thought Muslims were “naturally prone” towards committing crime.
Zakia Soman, a social activist and founder of the Indian Muslim Women’s Movement, said prejudice was also apparent online, where attacks against Muslim women had escalated in recent years.
“You have paid bots on social media who target women, journalists or anyone who is dissenting in this country,” Soman said.

“If it is women from another community, it becomes bestial. You are talking about auctioning women like cattle.”Zakia SomanIndian Muslim Women’s Movement

“These conservative and radical (people) are obsessed with women’s sexuality. And if it is women from another community, it becomes bestial. You are talking about auctioning women like cattle. It shows a medieval mindset.”

Online trolling of women in India

Cyber abuse is a major problem in India, particularly against women.
According to a 2019 report from Amnesty International, Indian female politicians receive nearly twice as much abuse online compared to their counterparts in the US and the United Kingdom.
The report examined the 7.1 million tweets that mentioned female politicians and found that nearly 1 million posts were abusive or problematic and included hateful and sexist abuse.
In India, many cases also go unreported, according to cyber law expert Karnika Seth.
“(After the victim) is pursued, they want closure. In many of these cases, the families and the victim want to wrap up the case, especially in cases of cyber stalking,” she said. 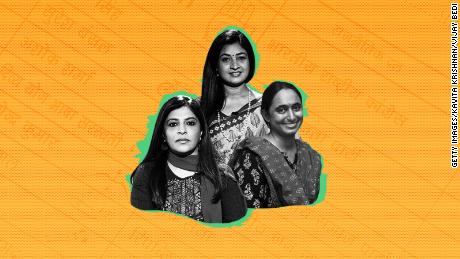 During an August 8 parliament session, India’s Minister of Information Technology Ashwini Vaishnaw said the internet’s rapid growth had caused a “rise in cyber crime across the world.”
However, India doesn’t have a uniform law against cyber bullying and the number of cases of registered with police in India is low.
Just seven cases of cyber bullying against women and children were registered in the country in 2017. That rose to 40 in 2018 and 45 in 2019, according to the National Crimes Record Bureau. It is unclear how many went to court, and if any convictions were made.
Activists say the Indian penal system is confusing and exhausting to navigate, so many victims don’t bother to file a complaint. If they do, lawyers have to submit electronic evidence pulled from the accused’s device, which is difficult — if not impossible — to obtain, Seth said.
And if a complaint does make it to court, it can also take years for a verdict.
“There is such a huge backlog (for cyber crimes),” Seth said. “The police are not well equipped either.”

It’s not the first time Muslim women have been targeted in fake online auctions.
In May, an Indian YouTube account called “Liberal Doge” uploaded a video similar to the app, which appeared to “auction” Muslim Pakistani women, posting photographs without their consent, according to local media reports.
The account has since been deleted by YouTube for violating its “strict policies” that prohibit hate speech, including content promoting violence or hatred based on gender and religion, a YouTube spokesperson told CNN.
According to YouTube, three similar accounts were also removed. It is unclear if they were run by the same person. CNN was not able to independently verify the content of the channels. 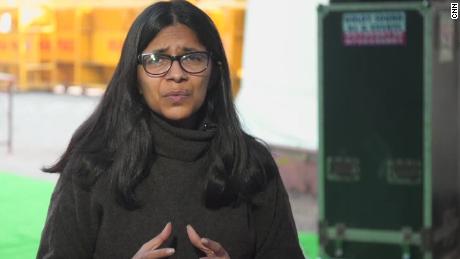 Swati Maliwal: I’ve had enough of violence against women

No one has been arrested or investigated in this case either, despite multiple police reports, authorities say.
Politicians and activists have joined calls for justice for the women advertised online.
On July 30, Priyanka Chaturvedi, a politician for the opposing Shiv Sena party, wrote to IT Minister Vaishnaw urging him to take action against Sulli Deals and Liberal Doge.
In her letter, which she posted to Twitter, Chaturvedi pointed out that the “lack of stringent and efficient preventative laws and punishments” is a motivating factor for such crimes to continue in the future.
“In a country where women are struggling with gender bias, these incidents yet again lay bare the protection and safety of women, especially in cyberspace,” the letter said. “It pains me to see that hardly any movement with regards to this case has been taken as of now despite the seriousness of it.”
CNN contacted Vaishnaw’s office for comment but did not receive a response.

Hana Mohsin Khan and Nabiya Khan say the lack of action by authorities highlights the lack of available support in India for victims of online abuse.
Nabiya Khan said she won’t stop speaking against abuse and will “defend women targeted by these men with everything I have.”

“Muslim women will not be suppressed into silence,” she added.
Source: Read Full Article