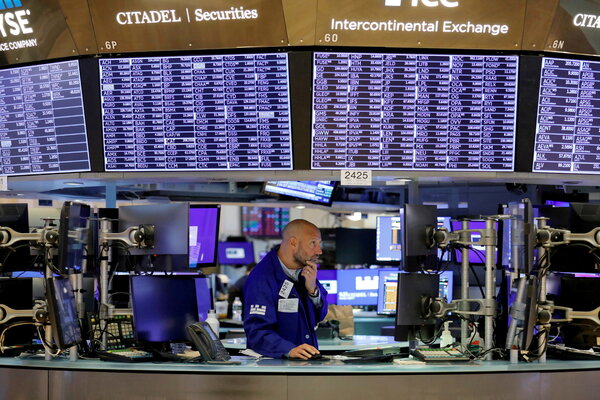 Evergrande is only part of the story

The global stock market drop yesterday — the S&P 500 recorded its biggest one-day plunge since May — was seemingly induced by the troubled Chinese real estate firm Evergrande. And when a single, large, teetering firm with extensive debt rattles the entire market, some reach for the “L” word: Lehman Brothers.

With markets regaining ground today, worries that one firm’s collapse could lead to a full-blown financial crisis appear to have waned. But Evergrande’s travails are far from over, and there are plenty of other concerns hanging over the market. First, about that Chinese property developer with $300 billion in debt …

What would an Evergrande default look like? The impact of the developer’s potential collapse — it doesn’t seem to have the cash for interest payments due this week — depends on how China’s leadership responds. Although Beijing hasn’t moved conclusively toward a bailout, it has ways to stop a financial disaster, namely by controlling banks and the flow of money in and out of the country. The authorities can also manage news coverage and quell any public unrest.

On top of Evergrande, a number of other Chinese property developers also appear “highly distressed,” said Jenny Zeng of AllianceBernstein. Goldman Sachs strategists estimate that an Evergrande collapse could cut China’s G.D.P. by $350 billion in the next year. But for now, the global repercussions of Evergrande’s troubles aren’t considered on the same scale as those that followed Lehman’s collapse, even if some of the debt owed by Chinese developers is held by foreign firms, who could get burned if the cash isn’t there.

Investors have plenty of other concerns, as shown by the rout yesterday in U.S. stocks that had little connection to the Chinese economy. Those worries include the spread of the Delta variant of the coronavirus, which continues to weigh on activity (but may be turning a corner); the end of pandemic emergency spending programs; the fraught negotiations over trillions of dollars in new spending; the looming fight over the government debt limit; and a potential start in the reduction of monetary stimulus by the Fed, to name a few.

More sell-offs like Monday’s could imperil a busy I.P.O. pipeline, although the blockbuster debut of Universal Music today — more on that below — may give others confidence to go ahead with their plans to list. And some market watchers say they think the trouble will mostly be contained to China, which could lead to money flowing out of the country and into other markets. “The continued regulatory issues and other concerns coming out of China will over the next year just drive more investment dollars into U.S. tech stocks,” wrote Daniel Ives of Wedbush in a research note after yesterday’s market close.

The U.S. prepares to lift its travel ban on foreign tourists. Starting in November, the Biden administration will lift restrictions for fully vaccinated travelers from 33 countries, including members of the E.U., Britain, China and India. The White House was under increasing pressure to halt the 18-month ban, which had squeezed the tourism industry and separated families across borders.

Justin Trudeau remains Canada’s prime minister, but his attempt to gain a majority by calling an early election appeared to fail, according to unofficial results of yesterday’s vote. He is set to continue leading a minority government, with his party’s seat count in Parliament little changed. Trudeau’s move was intended to capitalize on high approval ratings for his handling of the pandemic, but many voters apparently saw political opportunism instead.

Shell sells off a big oil field. A $9.5 billion deal will transfer Shell’s 225,000-acre site in the Permian Basin, the biggest American field, to ConocoPhillips. It’s the latest sign that Shell is accelerating its push toward producing cleaner energy, responding to concerns about climate change from investors and other stakeholders. Proceeds from the sale will be distributed to shareholders and will also help fund the company’s “energy transition,” Shell said.

Investment firms in the U.S. fret about the fine print of the Democrats’ carried-interest plans. The tax break for private-equity managers and firms wasn’t eliminated, as first proposed, by lawmakers as part of their $3.5 trillion spending package. But tweaks to the practice in the bill are more restrictive than the industry initially thought, especially on minimum holding periods before the tax break kicks in, Bloomberg reports.

Steven Mnuchin raises $2.5 billion for his new private equity firm. The former Treasury secretary in the Trump administration is getting some of the money from sovereign wealth funds in the Middle East, including Saudi Arabia, where he traveled extensively while in government.

Vivendi spun off Universal Music on the Amsterdam stock exchange today, and investors liked the sound of it: Shares jumped around 40 percent at the open, valuing the record label at more than $50 billion. Universal is by far the world’s largest music company, holding a 31 percent market share and boasting a roster of major stars, including Taylor Swift, Drake and Billie Eilish.

The successful debut of a player in a once unloved industry, defying a jittery market, could change the tune for others in the wider entertainment world.

The music industry had been all but written off not that long ago, with digital downloads (and piracy) eroding lucrative physical sales. But Universal, led by the power broker Lucian Grainge, leaned in to the trends and made big bets on streaming, social media and other areas:

Its 2017 deal with Spotify put the streaming pioneer on the path to going public.

The label has recently shored up its publishing library, buying Bob Dylan’s back catalog for about $300 million last year.

The bets have paid off: Universal Music has averaged double-digit growth in sales and profits over the past two years, and expects this to continue in 2021. The company now generates nearly 70 percent of its revenue from streaming and publishing.

There was some drama in the spinoff process, mostly coming from Bill Ackman. The billionaire’s hedge fund, Pershing Square, is a 10 percent investor in Universal Music, though not in the way he originally hoped. His plan to invest in Universal via his SPAC fell through when the S.E.C. took issue with its structure — his logic, however, was validated by the big pop in the company’s value. (That’s good for Pershing Square’s hedge fund investors, but not for its SPAC shareholders.) Other major investors in Universal Music include the Chinese gaming firm Tencent (20 percent) and the French billionaire Vincent Bolloré (18 percent).

China is a part of Universal’s growth plan and is one of the reasons that the label brought in Tencent as an investor. The risks of doing business in the country have become more stark lately, and the authorities there have made clear that Tencent is under scrutiny in a broader tech crackdown. In 2019, Universal Music was contacted by Chinese officials investigating market competition in the music industry.

“I’d heard that seeing the Earth from space changes one’s point of view of the world, but I was not prepared for just how much that was true.”

— Jeff Bezos, announcing plans to spend $1 billion on environmental conservation projects, part of his $10 billion Bezos Earth Fund. The Amazon founder took a brief trip to space in July on a mission run by his rocket company, Blue Origin.

The S.E.C. scores a victory in crypto battle

The cryptocurrency exchange Coinbase quietly backed down in its recent feud with the S.E.C., dropping contentious plans for an interest-generating financial product called Lend. Not long ago, Coinbase made a big fuss about the agency’s threat to sue if it introduced the product, which would have been based on stablecoins.

Coinbase did not mention the S.E.C. in its retreat. Lend would have allowed customers to earn up to 4 percent interest on USD Coin, a stablecoin tied to the dollar that Coinbase created with the payments company Circle. When it first heard about the S.E.C.’s qualms — the agency, unlike Coinbase, considered Lend a security — Coinbase’s chief, Brian Armstrong, called out the agency for “sketchy” behavior in a long tweet thread. But there was no explanation for its decision to pull the Lend product. “We continue our work to seek regulatory clarity for the crypto industry as a whole,” Coinbase said in a one-paragraph blog update. It declined a request for comment.

There are many reasons not to fight a federal agency. But one possible explanation for Coinbase opting not to call extra regulatory attention to itself may be because all eyes in Washington’s policymaking circles seem to be now turning to crypto. Officials at several agencies, including the S.E.C., have been convening to consider new rules for crypto, probably starting with stablecoins, in which Coinbase is deeply invested.

WeWork’s shares are set to begin trading in October. (Bloomberg)

SoftBank led an investment round in Sorare, a fantasy sports start-up with a side business in N.F.T.s, at a $4.3 billion valuation. (FT)

After allegations about workplace misconduct, the S.E.C. is investigating the video game maker Activision Blizzard. (NYT)

Johnson & Johnson claims that an extra shot of its vaccine substantially raises protection against Covid, based on a clinical trial. (NYT)

For the first time, the world has more than 3,000 billionaires. (Insider)

Online shopping is about to become more expensive, with FedEx and UPS raising shipping rates. (WSJ)

As the Washington Post beefs up its editing team, The Daily News gets an “as needed” editor in chief. (NYT)

Restaurants struggling to recruit workers are doing away with the tipped minimum wage, currently $2.13 per hour. (NYT)