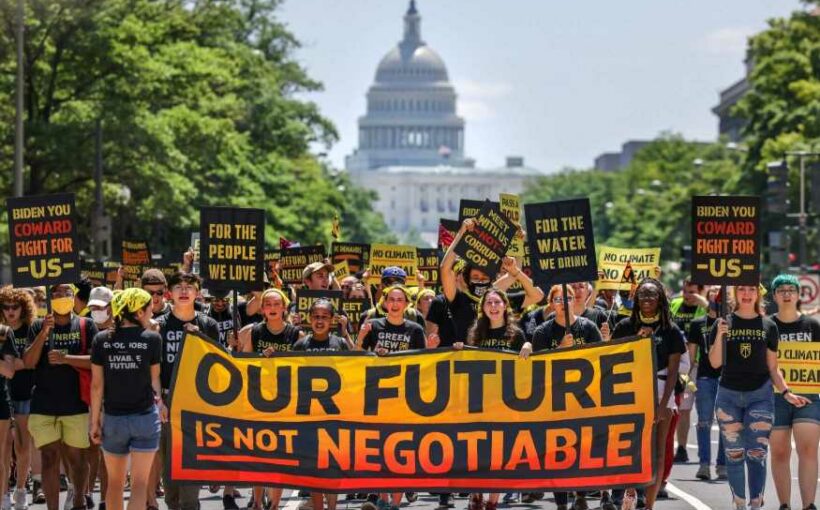 Hurricane Ida made landfall over Port Fourchon, Louisiana, as a Category 4 storm with winds of 150 miles per hour on Sunday, leaving more than one million Louisiana utility customers are without power. The entire resort city of South Lake Tahoe was ordered to evacuate on Monday. More than 20 people were killed as flash floods in New York and New Jersey caused massive flooding.

Those who are living through one of these crises made worse by anthropogenic climate change, are likely consumed with survival — evacuating, cleaning out debris, rebuilding. On the other side of immediate safety concerns, however, is often a new resolve to combat the common factor in these disasters: Climate change. But the size of the problem can make meaningful action seem impossible.

Can a single person do anything to meaningfully contribute to climate change relief efforts? Most certainly, say climate change experts. Here are a few simple things you can do right now:

Talk about climate change with family and friends

Talk about climate change with the people in your life.

"Every great social justice movement started on the community level," Jasmine Sanders, executive director of Our Climate, a Washington DC-based youth advocacy organization, told CNBC. That can mean "sitting down with your family to have a conversation about climate change at the dinner table," she said.

So, too, said Jerome Ringo, the co-founder and chairman of climate innovation company Zoetic Global, former leader at the National Wildlife Federation, and global ambassador for the countdown Climate Clock. "Each one teach one," Ringo told CNBC. When you learn about climate change, pass that information on to your neighbor so they too are able to have a conversation with another person.

"I call them kitchen conversations where people begin to sit and talk," Ringo said. A casual conversation could lead to a group coming together and deciding to call their elected representatives or starting a neighborhood recycling program, he said.

Know the climate policies of your elected officials

Take the time to educate yourself about the climate-related stances of elected officials, Adrienne L. Hollis, climate justice and health scientist, told CNBC.

"Really become familiar with legislation around climate change, for example the executive orders from President Biden, and pieces of legislation that are proposed by various members of Congress," Hollis said. She focuses on issues of health, environmental justice and climate at her namesake Hollis Environmental Consulting and was previously at the Union of Concerned Scientists. "There are so many opportunities for the public to have input," Hollis said.

If this feels overwhelming to try on your own, join groups that are working on legislative issues already, she said. "People need to know about all of the tools that are available to them, and from that — what tools are needed and missing," she said. "Get involved locally, regionally and at the federal level."

And keep current on developments. "Knowledge and awareness are power," Sanders said. "Stay in the know of how climate change is impacting each of us by reading news on a daily basis and then use your superpower to affect change!"

"The most important thing that individuals can do is vote, and vote on the climate," Michael E. Mann, professor of atmospheric science at Penn State and director of the Penn State Earth System Science Center, told CNBC.

"What we really need is systematic change and policies that will rapidly decarbonize our economy, such as subsidies for renewable energy, carbon pricing, and blocking of new fossil fuel infrastructure. As individuals we can't do these things," said Mann, who is also the author of "The New Climate War: The Fight to Take Back Our Planet."

Voting is the advice of Gernot Wagner, a climate economist at New York University, too. Specifically, Wagner calls on individuals to "vote well." You may think that your vote doesn't really count, given that you're one voice among millions, but Wagner addresses that in an essay he wrote with the late Martin Weitzman.

"Get up and vote; it's the right thing to do. And don't just vote for the sake of voting. Vote as an informed citizen. Vote well," Wagner and Weitzman write. "Vote for a cause larger than yourself. Vote for those who promise more than just to further their own agenda (or yours!). Vote for those who seek to look out for society at large."

Advocate for a price on carbon

"To have the most impact on fighting climate change, we need each and every individual to advocate for national and international policies that place a price and cap on carbon emissions," Jane Gilbert, the first ever Chief Heat Officer of Miami, told CNBC.

The maverick tech billionaire Elon Musk said he supports the idea of a price on carbon, too. "My top recommendation, honestly, would be just add a carbon tax," Musk told Joe Rogan on The Joe Rogan Experience podcast in February. "The economy works great. Prices and money are just information. … If the price is wrong, the economy doesn't do the right thing."

Musk said high concentrations of carbon in the atmosphere and environment are, economically speaking, an "unpriced externality." An externality happens when some consequence of production is not properly reflected in the market. In this case, it is a negative externality.

Those externalities have serious consequences. "Currently, the most vulnerable in our country and world are already paying the price of continuing business as usual," Gilbert said. "It's time to place that cost on the fuels itself and take away the land leasing and other subsidies to the fossil fuel industry," Gilbert said.

If a price on carbon were to be implemented, the money raised should be used to "address the inequities of short term price increases as we transition to a clean energy economy and to assist communities in adapting to and recovering from the impacts of climate change," Gilbert said.

Around the globe, livestock are responsible for 14.5% of all anthropogenic greenhouse gas emissions, according to the Food and Agriculture Organization of the United Nations. Cattle are the worst offenders, responsible for 65% of the emissions caused by all livestock.

"Whether you're a flexitarian or vegetarian or vegan, or pescatarian, whatever it is — just eating more plants is is a great direction to be going," Kelsey told CNBC.

Taking responsibility for our own carbon footprint can also mean traveling less said Chris Funk, director of the Climate Hazards Center at UC Santa Barbara and author of the new book, "Drought, Flood, Fire: How Climate Change Contributes to Catastrophes."

"According to the EPA, transportation and electricity generation are the two biggest sources of U.S. emissions. Driving less, driving fuel-efficient vehicles, and flying less are straightforward ways that everyone can make a difference," Funk said

Start a decarbonization plan at home, said Wagner. His own home greening journey was detailed by New York Magazine, and included everything from new insulation to adding a heat pump on the roof and rewiring the house to support it — and it cost over $100,000. But not every project needs to be so extensive.

"Many households can easily switch to an affordable renewable-oriented electricity plan, and improved insulation and windows make our homes climate-smart while saving us money," Funk said.

As with voting, Wagner provides a rebuke for the statisticians who are ready to provide proof their individual behavior doesn't matter. "Reducing your own carbon footprint to zero is a noble gesture, but it's less than a drop in the bucket. Quite literally: the standard U.S. bucket holds about 300,000 drops; but you are one in over 300,000,000 as an American, and you are one in seven billion as a human being," Wagner and Weitzman write.

"So why go green at all? Because it's the right thing to do. It's also how we learn the values that we have to apply on a much larger scale to tackle climate change," they write.

Identify your personal passion or talent and use it

"Do anything — anything at all," Wagner told CNBC. "That begins with talking about climate change. It also means doing what you do best. Students, study. Teachers, teach. Writers, write. Entrepreneurs, invent, build, ship! Whatever it is you do best, consider how climate change figures into it, and do that."

With a bit of research, you are likely to find a community of like-minded individuals, said Kelsey.

"What are you passionate about? What are you particularly great at….what do you do even if nobody wants you to do it, because you love it so much?" Kelsey told CNBC. "Finding out what really drives you, and recognizing that and then losing that voice is the most effective thing to do. … This individualization and recognizing our own emotional landscape, our own passions, that's where we do the most good, because those are the things we'll continue to do."