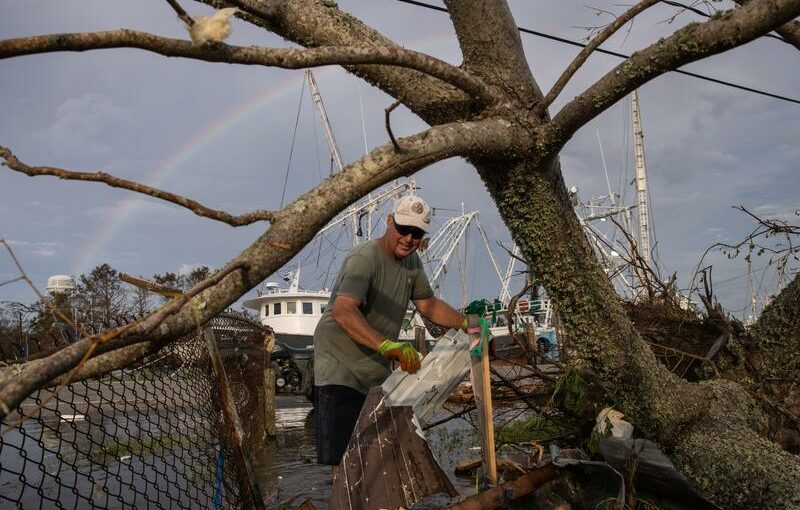 (Reuters) – Insurers are bracing for a hit of about $18 billion from Hurricane Ida in the United States and the Caribbean, catastrophe modeling company Karen Clark & Co (KCC) said on Wednesday.

A rainbow is seen in the background as Jody Galliano, who said he is related to the founders of the town, clears debris from his yard in the aftermath of Hurricane Ida in Galliano, Louisiana, U.S., August 31, 2021. REUTERS/Adrees Latif

The number, closer to the lower end of the initial estimates given by insurance analysts while the storm was still raging earlier this week, is the first from one of the industry’s major risk-modelling experts.

KCC said $40 million worth of the insured loss would be in the Caribbean and the rest from wind and storm surge losses in the United States.

Hurricane Ida made landfall in the United States on Sunday as a Category 4 storm, after sweeping ashore from the Gulf of Mexico, flooding wide areas under heavy surf and torrential rains.

Insurance experts had earlier in the week estimated $15 billion to $30 billion in claims from Hurricane Ida, but cautioned the figure could be higher, in part because of pandemic pricing that has pushed up the cost of lumber and labor to rebuild.

The wide-ranging estimates, based on models that track the storm’s severity and path, are still likely to be far less than the $87 billion in claims from Hurricane Katrina in 2005, when adjusted for inflation, according to experts.

Ratings agency Fitch said losses from Ida will likely surpass those from winter storm Uri at $15 billion and Hurricane Laura – the costliest insured catastrophe event of 2020 – at $10 billion.

KCC said that its data showed Ida tied with the Last Island Hurricane in 1856 and Hurricane Laura in 2020 for the strongest maximum sustained winds at landfall in Louisiana.

Its forecast includes damage to privately insured residential, commercial, and industrial properties and automobiles, and excludes boats, offshore properties or losses that come under the U.S. National Flood Insurance Program.

Analysts from UBS said the fallout from Ida would hit Swiss Re and Lancashire’s earnings per share hardest, by 32% and 30% respectively, while Hannover Re and reinsurance industry leader Munich Re would be the least hit.