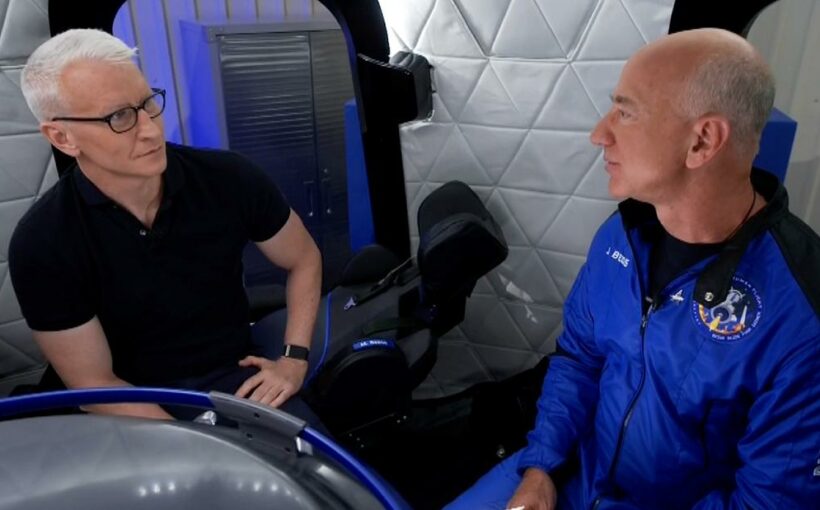 New York (CNN Business)Amazon founder Jeff Bezos caught up with CNN’s Anderson Cooper after returning to Earth Tuesday, reflecting on his trip to space and the moments before takeoff.

Before leaving for space, Bezos and his crew “told each other we love each other,” he told Cooper. “It was a very emotional morning,” he said.
Bezos also talked to the crew about his early days with Amazon, founded in 1994, and drew a comparison between that experience and his Blue Origin journey. And he told the crew members he wanted them to understand the importance of the trip.

“It is like the barnstorming days,” Jeff Bezos told Anderson Cooper, referring to the early days of aviation and the innovations that ensued. “And that eventually leads to the 787.”

Bezos also discussed pollution and climate change after his space trip, emphasizing his idea to offload the Earth’s industrial production. “We really have to move heavy industry and polluting industry off Earth,” Bezos said.

He said he wants to make “dirty polluting stuff” like “chips and microchips” in space, but he added that the timeline might span over multiple decades. “It won’t be done in my lifetime,” said Bezos, who is 57 years old. “We have lots of problems on Earth,” he said, specifically pointing to poverty, hunger, climate disasters and pollution. “We have to work on the here and now and and we have to look to the future.”

Last year, Bezos used his vast wealth to launch the Bezos Earth Fund, which focuses on the transition to clean energy and equitable access to healthy air, water, and land. After his flight, he announced that he planned to give $100 million each to CNN contributor Van Jones and chef José Andrés to give away to philanthropic causes as they see fit.
“We’ve never just focused on the present or just focused on the future,” Bezos said, reflecting on history and innovation. “If you don’t focus on the future, then you don’t have explorers.”
Source: Read Full Article