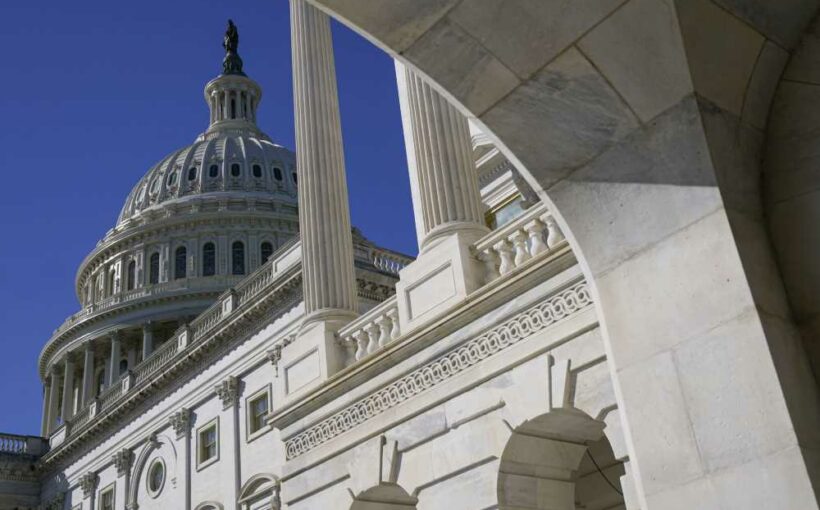 WASHINGTON (AP) — President Joe Biden and Democrats agreed Wednesday to tighten the upper income limits at which people could qualify for stimulus checks, a Democratic official said, a major concession to moderates as party leaders prepared to move their $1.9 trillion coronavirus relief bill through the Senate.

The COVID-19 relief measure Senate Democrats planned to unveil will also retain the $400 weekly emergency jobless benefits that were included in a House-approved version of the legislation, the official said. The person spoke on the condition of anonymity to describe internal Democratic conversations.

The changes came with Republicans, who may unanimously oppose the legislation, lashing the bill as an overpriced Democratic wish list that lavishes help on many who don’t really need it.

In a 50-50 Senate where Democrats must remain united, party moderates have been pushing to refocus the bill's spending more closely on those must hurt by the pandemic and resulting economic slowdown.

As part of Democrats’ legislative thrust on what is Biden's top initial legislative priority, individuals earning up to $75,000 — and couples up to $150,000 — would get $1,400 checks per person.

The version the House approved last Saturday would gradually phase down those amounts and reach zero for individuals making $100,000 and couples earning $200,000.

But under Wednesday’s agreement, those checks would end for individuals making $80,000 and couples earning $160,000, the official said.

But Biden and party leaders stood firm and will retain the $400 weekly emergency jobless benefits, which are paid on top of regular state payments. Moderates have wanted to trim those payments to $300 per week, with some saying the higher amount could discourage people from returning to their jobs.

On Tuesday, Biden took to Twitter to signal he wouldn't budge from his demand that lawmakers add a fresh $1,400 payment to the $600 that millions of individuals received from a December relief measure. That new installment comprises nearly a quarter of the overall bill's cost.

“The fact is that $600 is not enough. The Senate needs to pass the American Rescue Plan and finish the job of delivering $2,000 in direct relief,” Biden wrote in one of his infrequent uses of a medium his predecessor, Donald Trump, at times used over 100 times daily.

The huge relief package is a too-big-to-fail moment for the fledging president, who would be politically staggered if Congress — controlled narrowly by Democrats but controlled nonetheless — failed to deliver. Conquering the virusthat’s killed half a million Americans and flung the economy and countless lives into tailspins is Biden’s top initial priority.

So far, Republicans are following the template they set during Barack Obama’s presidency. Senate Minority Leader Mitch McConnell, R-Ky., said he hoped GOP senators would oppose the bill unanimously, as their House counterparts did early Saturday when that chamber approved its version of the measure.

“The new administration made a conscious effort to jam us,” McConnell told reporters. “We'll be fighting this in every way that we can.”

Democrats are using special rules that will let them avoid GOP filibusters that would require them to garner an impossible 60 votes to approve the legislation.

The Senate bill was expected to largely mirror the House-approved package, with the most glaring divergence the Senate's dropping of language boosting the federal minimum wage to $15 hourly.

Schumer said Senate debate would commence as soon as Wednesday and predicted, “We'll have the votes we need to pass the bill." Democrats want to send a final package to Biden by March 14, when an earlier round of emergency jobless benefits expires.

The bill has hundreds of billions of dollars for schools and colleges, COVID-19 vaccines and testing, mass transit systems, renters and small businesses. It also has money for child care, tax breaks for families with children and assistance for states willing to expand Medicaid coverage for low-income residents.

It was clear there were still moving parts.

Senate Democrats were removing $1.5 million for a bridge between New York state and Canada and around $140 million for a rapid transit project south of San Francisco after Republicans cast both as pet projects for Schumer and House Speaker Nancy Pelosi, D—Calif.

Aides to both Democratic leaders said the projects weren’t new and had been supported by the Trump administration.

Sen. Angus King, I-Maine, said he wants the bill’s $350 billion for state and local governmentsto specify minimum amounts for municipal governments and has called for $50 billion to improve broadband coverage.

Despite every Democrats' huge leverage because all their votes are needed, none have so far threatened to sink the legislation if they don’t get their way. All are aware of how that would rattle Biden’s presidency and Democrats’ ability to be productive during this Congress.

“We want to get the biggest, strongest bill that can pass, and that’s what we’re going to do," Schumer said.

There were indications loose ends were falling into place. In one sign, 11 Democratic senators wrote Biden urging him to use a huge, upcoming infrastructure bill to create regularly paid relief and jobless benefits that would be automatically triggered by economic conditions.

Some progressives had wanted those payments included in the COVID-19 bill. Democrats’ push to include it in later legislation suggested an effort to satisfy progressives while avoiding jeopardizing the current package.

Progressives, though, were still smarting over the virtual certainty that the Senate bill will lack the minimum wage boost, up from $7.25 hourly locked in since 2009.

The chamber's nonpartisan parliamentarian said last week that including that increase violated Senate budget rules. Opposition by moderates including Manchin and Sen. Kyrsten Sinema, D-Ariz., has left Democrats without the votes needed to salvage it.

A fundraising email by Our Revolution, a progressive political committee that was started by backers of Sen. Bernie Sanders, I-Vt., underscored the left's anger. Sanders is chief Senate sponsor of the wage increase.

“The politician standing in the way of change is Vice President Kamala Harris," said the email, citing the possibility — already rejected by the White House — of her casting a tie-breaking Senate vote to overrule the parliamentarian. It said the organization will “hold her accountable if she decides to turn her back on essential workers."