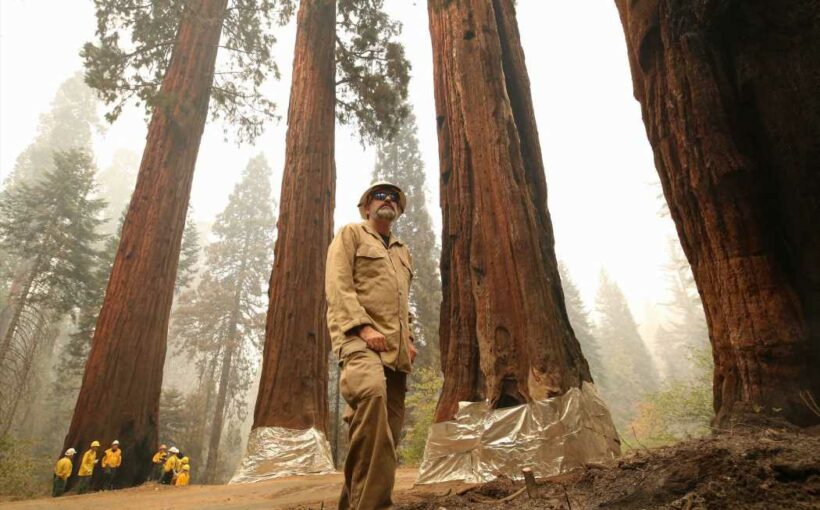 Last week, fires began burning out of control in steep canyons near Sequoia National Park, which contains some of the world's largest trees as measured by volume. As the flames approached, park officials wrapped the bases of some trees in fireproof aluminum blankets to protect the giants. As of Monday, the flames had mostly passed by the biggest trees, although the blankets were probably less important to their salvation than the controlled burns the park has done in recent years, a park official told SFGate.

Here's a look back at the fight to protect the trees in Sequoia:

Flames lick up a tree as the Windy Fire burns in the Trail of 100 Giants grove in Sequoia National Forest.

A photographer takes pictures at the base of giant sequoia trees in the "Lost Grove" along Generals Highway north of Red Fir.

Firefighters spray water as flames push towards a road during the Windy Fire in the Sequoia National Forest.

Ed Christopher, deputy fire director at the U.S. Fish and Wildlife Service, looks over the Four Guardsmen, four gigantic trees at the entrance to General Sherman at Sequoia National Park.

Operations Section Chief Jon Wallace looks over General Sherman, the world's largest tree by volume, which was protected by structure wrap from fires.

Firefighters work to control the Windy Fire as trees burn.

Deputy Fire Director at US Fish and Wildlife Service, Ed Christopher checks the residual heat at the Four Guardsmen.

The Windy Fire blazes through the Long Meadow Grove of giant sequoia trees near The Trail of 100 Giants.

A huge tree is marked unsafe by firefighters as the Windy Fire burns.

Firefighters battle the Windy Fire as it burns in the Trail of 100 Giants grove.

A firefighter watches flame and smoke rise into the air as trees burn.