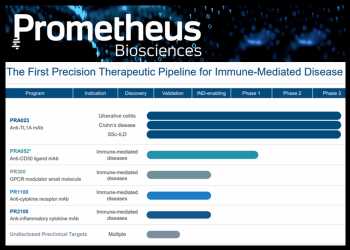 Prometheus is a biotechnology company pioneering a precision medicine approach in developing novel therapeutic and companion diagnostic products for the treatment of inflammatory bowel disease.

The company’s lead drug candidate is PRA023, a monoclonal antibody that works by blocking TL1A, a target associated with both intestinal inflammation and fibrosis.

PRA023 is under the following clinical trials:

The ARTEMIS-UC phase II trial comprises of 2 cohorts and topline Cohort 1 data is expected this quarter.

Full results from the APOLLO-CD phase II trial are also due this quarter.

The ATHENA-SSc-ILD phase II trial was initiated in March of this year and topline results are anticipated in the first half of 2024.

Next in the pipeline is PRA052, a first-in-class monoclonal antibody blocking CD30 ligand, a costimulatory molecule that has been implicated in inflammatory bowel disease.

Ulcerative colitis and Crohn’s disease are two of the most common forms of inflammatory bowel disease.

However, there still remains an unmet need on the efficacy side in the management of IBD. Prometheus believes that its precision approach will help to tackle limitations of traditional IBD drug development.

Prometheus Biosciences made its debut on the Nasdaq Global Select Market on March 12, 2021, pricing its stock offering at $19 per share.