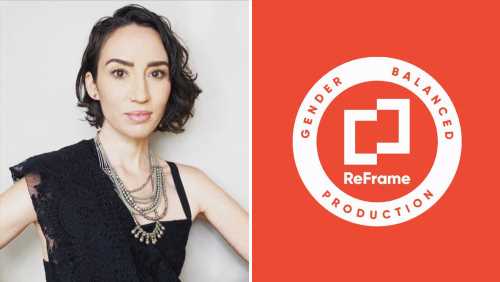 EXCUSIVE: The inclusive coalition of industry professionals ReFrame has selected former director of Canada’s Inside Out LGBTQ Film Festival Andria Wilson Mirza as its new Director.

ReFrame was founded in 2017 by Women In Film and Sundance Institute with the mission to increase the number of women of all backgrounds working in the screen industries.

In her role at ReFrame, Mirza will work with the ReFrame Ambassadors and Partner Companies to implement the initiative’s key programs, including: the distribution of the ReFrame Stamp (a mark of distinction for productions that demonstrate gender-balanced hiring practices), the ReFrame Rise program in support of mid-career women directors, and the expansion of the organization’s Culture Change Handbook into the interactive ReFrame Playbook, which will launch in 2021.

“Andria has a long track record of advocating for underrepresented voices in the screen industries, as well as the strategic vision to lead ReFrame in new and innovative ways,” said Sundance Institute CEO Keri Putnam and WIF Executive Director Kirsten Schaffer in a joint statement. “With Andria at the helm, working closely with the ReFrame Council and Ambassadors, ReFrame will continue to play a vital role in creating a gender-representative industry.”

“I’m honored to join the exceptional group of individuals and organizations that have built ReFrame,” said Mirza. “In the movement for gender equity, we need coalition building, and coordinated and collaborative efforts to create systemic change. I look forward to working with the ReFrame Council, Ambassadors and partner companies to drive these efforts.”

In addition to being the Executive Director of Inside Out in Toronto, Canada, one of the world’s largest LGBTQ film festivals, Mirza launched the International LGBTQ Film Financing Forum. While at Inside Out, Andria also led the development of strategic partnerships that focused on industry advocacy and professional development for underrepresented filmmakers. She co-founded the North American Queer Festival Alliance and the LGBTQ talent database Out on Set, launched an endowment fund for queer women and trans emerging directors, and spearheaded a four-year partnership between Inside Out and Netflix to expand career and content development programs for LGBTQ filmmakers.