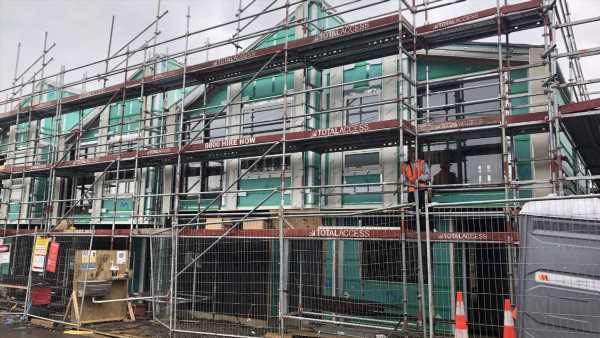 Just as the Government and Labour move to allow mass Auckland intensification, a group of Remuera neighbours have won a court battle to halt work on an under-construction 13-unit apartment project that is almost completed.

Justice Gerard van Bohemen in the High Court at Auckland allowed an appeal against Auckland Council’s resource consent for the apartment scheme at 44 Ventnor Rd.

“The council did not turn its mind to the effects of building intensity on neighbourhood character and residential amenity,” the judge ruled.

The 1600sq m site had only one house on it before work started there.

“It is absolutely horrific. It looks like a motel block,” said Richard Brabant who lives two doors away. “The structures are all up and all the outside cladding is nearly done.”

The council now has to consider the application again and work there has to stop, he said.

The proposal for such a significant development had not been properly assessed, Justice van Bohemen said in his decision out today.

Brabant said the parties would make a separate injunction stop-work application if work continued tomorrow. But he said work should stop immediately if the developer took advice from his lawyers at Simpson Grierson.

The judge said the neighbours might have been deprived of their rights to be notified of the scheme for the land and to have their views taken into account.

He even cited the Government’s intensification moves on Auckland to allow more houses on sites here in the case whose respondents included developers 44 Ventnor.

“I recognise that there will be prejudice to 44 Ventnor and disappointment to the council that a proposal for a more intensive use of a large site in a residential zone in Auckland is being held up when there is a strong policy impetus in the National Policy Statement – Urban Development and the Auckland Unitary Plan for more intensive development in residential zones,” he said.

The decision was also issued at a time when the Government was looking to enable even greater intensification of certain residential areas than that currently provided for in the National Policy Statement, the judge noted.

The irony was not lost on him.

But he said it was the court’s task to apply the law as it stood today to ensure major implications were properly assessed.

Not only does the developer and council have to return to the drawing board, but building work on the site has already started.

On the matter of building work having already started, the judge said that wasn’t his concern.

“44 Ventnor cannot be faulted for choosing to exercise its legal rights once the consents had been granted.

“However, the fact it chose to take the commercial risk of commencing construction knowing that the consents might be set aside should not deprive long term full-time residents in the vicinity of their rights to have the question of whether they are adversely affected by a significant development properly determined,” he said.

The council’s planner did not consider the effects of the 13 dwellings which was more than four times the number permitted as of right in the mixed housing suburban zone, the judge said.

He did refer to shading, visual dominance and privacy as well as streetscape but didn’t consider the relevance of those matters to the number of buildings proposed for the site or activities on the site.

44 Ventnor’s director is Kurt Gibbons. He and his wife paid $23.5m for a new Herne Bay property on the waterfront at Marine Pde, according to OneRoof last month.

Brabant said all 13 units were pre-sold before the application for resource consent was even lodged “which indicates a degree of confidence that the council would just sign it off. I asked for limited notification to the neighbours.”