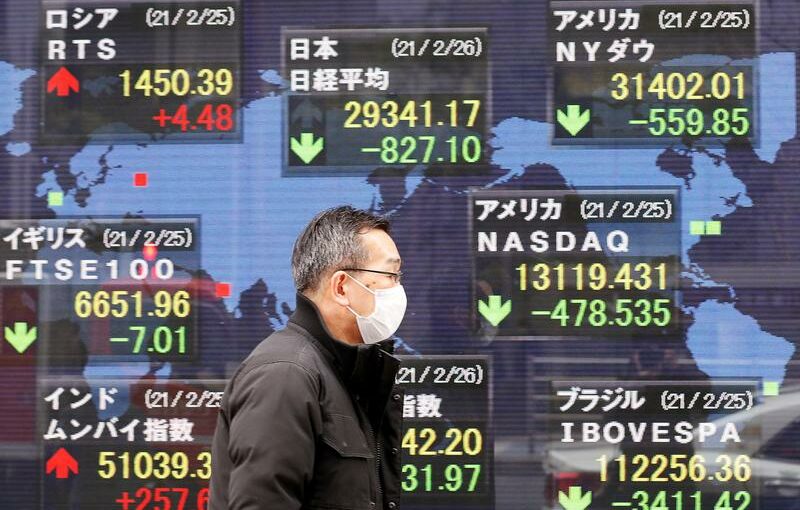 SINGAPORE/NEW YORK (Reuters) -Stocks crept higher on Thursday following their weakest quarter in a year, while higher Treasury yields supported the dollar, as investors parsed the details of a $2 trillion U.S. government spending plan and hoped for strong jobs data later in the week.

FILE PHOTO: A man walks past a stock quotation board at a brokerage in Tokyo, Japan February 26, 2021. REUTERS/Kim Kyung-Hoon/File Photo

MSCI’s broadest index of Asia-Pacific shares outside Japan rose 0.6% after a modest drop on Wednesday. Japan’s Nikkei rose 1.3% as a survey showed big manufacturers’ mood bouncing back to pre-pandemic levels.

Ten-year U.S. Treasuries, which had suffered their biggest selloff in a dozen years last quarter, remained under pressure and yields crept as high as 1.753%, while the dollar stood just shy of a one-year peak on the yen at 110.685.

On the heels of a $1.9 trillion pandemic relief package, President Joe Biden on Wednesday outlined a broad plan to re-make the world’s biggest economy including spending on roads, railways, broadband, clean energy and semiconductor manufacture.

“And if anything the higher taxes probably limit future inflationary pressure, and in a strange way might even help bond yields to stabilise where they are.”

It is not clear if the plan could clear Congress, since it has had an icy reception from Republicans, however, the breadth of the proposed spending did help draw investors back to technology shares overnight, and the Nasdaq rose 1.5%. [.NDX]

Biden’s plan includes a $174 billion investment in electric vehicles, and Tesla led gains with a 5% jump, while Apple rose 1.9% and Microsoft lifted 1.7%.

“We’re just seeing a bit of momentum in people picking up some of the left-behind sectors, which is growth, and that will flow through into Asia.”

U.S. markets had closed out the quarter with gains – the S&P 500 rose 5.8% and the Dow Jones 7.8% over the three months – however the 4.1% quarterly rise in world stocks was the slowest since the recovery from last March’s meltdown had begun.

This has come with growing concern about hiccups in the vaccine rollout and a fresh wave of coronavirus infections, particularly in Europe where on Wednesday France ordered a third national lockdown.

The euro has been punished as the pandemic turns resurgent on the continent, and was clinging on at $1.1729 in Asia while investors awaited Friday’s U.S. labour market data to assess the growing gap in recoveries astride the Atlantic Ocean.

There are also other signs of fragility in sentiment and rising risk. The flop listing of food delivery company Deliveroo, which fell by nearly a third on debut in London, is a far cry from the frenzy that sent U.S. new-economy names Airbnb and DoorDash soaring on debut last year.

Investors are jittery about the fallout from the fire sale of holdings by stricken asset manager Archegos Capital, which has walloped the stocks involved and shares in some of Archegos’ brokers, Credit Suisse and Nomura.

Australia’s fastest home-price gains in more than three decades last month also point to some of the side effects of ultra-easy monetary policy, possibly putting pressure on central banks to curtail support sooner than they had planned.

Risk-sensitive currencies and commodities reflected the caution, and the Australian and New Zealand dollars each weakened about 0.2% on Thursday. Crude oil prices nursed overnight losses with Brent futures rebounding about 0.5% to $63.03 a barrel and U.S. crude up 0.6% at $59.52. [O/R]

Gold, which pays no income, was mostly flat after an overnight bounce above $1,700. Even so, it suffered its worst quarter since late 2016 owing to the rise in U.S. yields.