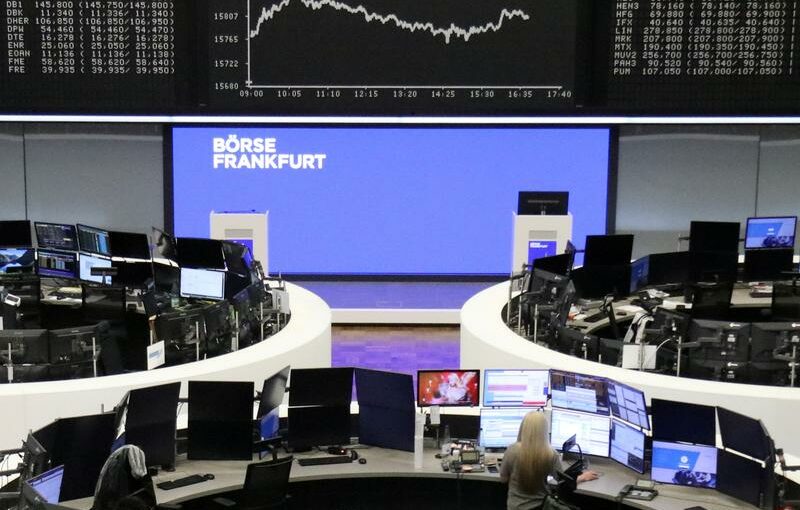 LONDON/SYDNEY (Reuters) – World stocks hit a record high on Thursday after a smooth start to the U.S. Federal Reserve’s mass stimulus unwind plan and as traders waited to see if the Bank of England would be the first major central bank to raise interest rates since COVID hit.

European stocks [.EU] notched all-time highs for a fourth day running. Oil was up ahead of an OPEC+ meeting, while there was a general drop in volatility on relief that the Fed hadn’t pulled any surprises on Wednesday.

“We are constructive in the short-term,” said SEB investment management’s global head of asset allocation Hans Peterson, encouraged that neither the Fed nor European Central Bank were racing to raise rates at the moment.

“We still think rates are so low that equities continue to have the upper hand”.

Anxious eyes now turn to the Bank of England, which may kick off a rate increase cycle at 1200 GMT in what will be its most hotly awaited policy decision in years.

It faces the opposing challenges of inflation set to more than double its 2% target this year and a squeeze on household spending as the government scales back stimulus aid, including its job support scheme, and raises taxes.

For now, equity investors were content that the Fed was in no rush to remove the policy punch bowl and the pan European STOXX 600’s 0.5% rise helped MSCI’s 50-country world index hit its third straight record high.

Nasdaq futures rose 0.2% to another record high. If sustained, it would be the ninth straight session of gains.

In Asia overnight, Japan’s Nikkei climbed 0.8% and touched its highest in a month, while MSCI’s broadest index of Asia-Pacific shares outside Japan crept up 0.4%.

The Asian index has been burdened by a spike in new coronavirus cases in China, which threatens to curb consumer spending in an already slowing economy also hampered by property market strains.

As expected, the Fed announced it would trim its bond buying by $15 billion a month from this month, while leaving open the option to quicken or slow the pace as needed.

Fed Chair Jerome Powell did sound slightly less sure inflationary forces would prove to be fleeting, enough to hit longer-term bonds and “bear steepen” the yield curve. [US/]

“Overall, we didn’t get anything that should imply higher market pricing of hikes than what we have now,” said Jan Nevruzi, an analyst at NatWest Markets.

“While not an ultra-dovish meeting, the result was still a far cry from some of the more stunning hawkish surprises seen recently from the likes of the Bank of Canada,” added Nevruzi.

The Canadian and Australian central banks have caused turmoil in their bond markets in the last couple of weeks by abruptly changing tack on policy.

Poland’s central bank surprised with an aggressive hike on Wednesday and the Czech Republic is expected to raise its rates again later, heightening tension for the BoE’s meeting where the decision could be nail-bitingly close.

The dollar climbed 0.4% to 94.225 as speculators consolidated long positions, though the uptrend of the past five months was still in place. It firmed on the yen to 114.05, aiming for the recent top of 114.69.

The euro pared overnight gains to $1.1550, hampered by expectations the European Central Bank will trail the Fed in tightening by some margin.

Nevertheless, long-dated euro zone bond yields edged higher amid all the BoE anticipation, whereas British 10-year borrowing costs, which have doubled since mid-August, were a basis point lower at 1.06%.

“Spill-overs from the BoE decision should be in store today,” analysts at Commerzbank said in a note, adding they too believed the meeting could deliver a 15 basis point hike.

In commodities, the rise in bond yields saw gold dither around $1,774 an ounce. [GOL/]

Oil prices saw their biggest rise of the month as expectations mounted that OPEC+ would ignore pressure to ramp up production at a meeting later and stick to its current path. [O/R]

Crude had been pushed down on Wednesday by news that U.S. inventories grew and as Iran announced the resumption of talks on a nuclear accord, but Brent was back up more than a dollar at just over $83 a barrel in early London trading.

“The majority of OPEC+ members cannot raise production from current levels … while even Saudi Arabia has stressed the need to exercise caution on demand growth, given increased COVID instances, while boosting crude oil output,” analysts at Citi said in a note.