Home » Business » The epic rise and fall of Elizabeth Holmes 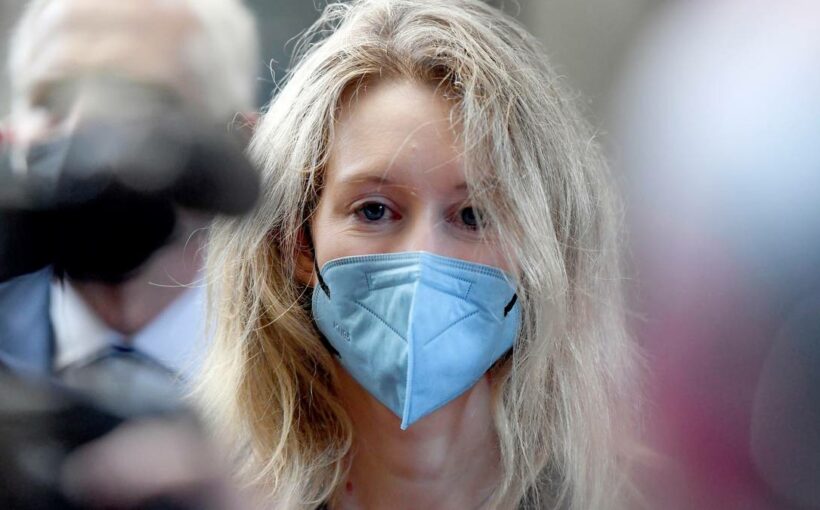 In Silicon Valley’s world of make-believe, the philosophy of “fake it until you make it” finally gets its comeuppance.

Near the end of Elizabeth Holmes’ criminal trial, her lawyers submitted into evidence her punishing self-improvement plan.

“4am Rise and thank God,” the handwritten memo began. Exercise, meditation, prayer, breakfast (whey and, as she spelled it, “bannanna”) followed. By 6.45am, a time when slackers were still fumbling for the alarm clock, she was at the office of Theranos, the blood-testing company she founded in 2003.

Holmes had many rules at Theranos: “I am never a minute late. I show no excitement. ALL ABOUT BUSINESS. I am not impulsive. I know the outcome of every encounter. I do not hesitate. I constantly make decisions and change them as needed. I speak rarely. I call bullshit immediately.”

It worked. Holmes’ resolve was so forceful, and fit so neatly into the Silicon Valley cliche of achieving the impossible by refusing to admit it was impossible, that it inspired belief right up to the moment today when a jury officially convicted her of four counts of fraud.

The verdict signalled the end of an era. In Silicon Valley, where the line between talk and achievement is often vague, there is finally a limit to faking it.

From Stanford University dropout to Theranos’ US$9 billion valuation to conviction, it is an epic rise and fall that will be chewed over in the coffee shops and juice bars of Palo Alto, California, until the tech industry departs for a new life in Elon Musk’s and Jeff Bezos’ off-world colonies. For a decade, Holmes fooled savvy investors, hundreds of smart employees, an all-star board and a media eager to anoint a new star even, or especially, if she had no qualifications.

As her self-improvement scheme made clear, she was trying to turn herself into a machine that had no time for anything but work. This was not for her own benefit, of course, but humanity’s. She perfectly encapsulated the Silicon Valley credo that tech was here to serve us, and never mind exactly how it did it, the billions it was making or whether it even worked.

Whenever anyone — a regulator, an investor, a reporter — wanted to know a little more about exactly how the Theranos machines functioned, the company cried “trade secrets.” The real secret, of course, was that Theranos didn’t have any trade secrets because its machines didn’t work. But her answer worked for a long time.

Hiding fraud behind the imperatives of secrecy wasn’t the only way Holmes’ actions were rooted in tradition. Her self-improvement plan dated back to Ben Franklin but found its most indelible expression in F. Scott Fitzgerald’s creation of Jay Gatsby, the mysterious, alluring, handsome millionaire who also ran a few swindles.

Gatsby was practically Holmes’ brother. He, too, got where he was with a schedule and rules, in his case written inside a book when he was a striving youth:

5pm-6pm: Practice elocution, poise and how to obtain it

The parallels with Holmes extended even to Gatsby’s equally loose grasp of spelling. “No more smokeing or chewing,” he admonished himself.

Gatsby was a bootlegger but also used Wall Street to cheat. He sold fake bonds. Holmes chose Silicon Valley, the last and greatest of all human dreams. In the first decade of the century, it promised to reinvent transportation, friendship, commerce, politics, money.

Blood-testing must have seemed like a breeze by comparison, especially since Holmes was a natural salesperson, as good at bending reality as Steve Jobs himself. Here she was in an interview with the radio show Tech Nation in 2005, explaining what Theranos was all about:

“We focused on creating a customised medicine tool that could be used in the home by every patient, so that every day, a patient can get real-time analysis of their blood samples.”

Who could not applaud such an invention? Theranos was making a messy, uncertain and time-consuming medical process into something effortless and painless. “A little teeny needle that pulls a little teeny drop of blood,” she said. Software would do the rest.

Tech Nation’s host, Moira Gunn, has a master’s degree in computer science and a doctor of philosophy in mechanical engineering, but she was dazzled. “How old are you, Elizabeth?” she asked.

Her age was brought up not to knock down her claims but to underline how impressive they were. “I’m gonna go tell my two children, they better get off their duffs,” Gunn exclaimed.

Holmes said Theranos’ device was in “the production phase.” She added, “We hope to release it, actually, to a pharmaceutical partner around mid-to-late this year.” Thirteen years later, when the company dissolved, it had never successfully released a device.

In 2005, however, even reinventing blood-testing at 21 was not enough, so deep was our expectations of genius. Holmes was asked about her future, and gave the stock Silicon Valley response: You ain’t seen nothing yet.

Theranos already had the “next generations” of its device in prototype, she said. It was miniaturised to make it even faster, to make it “more high-throughput.” It would be automated: “You don’t even have to touch your finger on the device.”

So in one of the first media interviews Holmes ever did, she said Theranos had a working device that would be able to analyse your health without actually touching you. No one called her on it. No wonder she and her deputy and boyfriend, Ramesh Balwani, the company’s chief operating officer known as “Sunny,” thought they could brazen it out in the Silicon Valley tradition until they had something that actually worked.

This is a credulous age. William Perry, a Theranos board member, was secretary of defence under President Bill Clinton, a mathematician, engineer and Stanford professor. Not, in other words, a fool with regard to Silicon Valley. Yet he told The New Yorker in 2014 that Holmes “has sometimes been called another Steve Jobs, but I think that’s an inadequate comparison. She has a social consciousness that Steve never had. He was a genius; she’s one with a big heart.”

Jobs, who died in 2011, might as well have been a recruiter for Theranos. Adam Rosendorff, a lab director at Theranos, testified during Holmes’ trial that he thought the company was going to be “the next Apple.” He applied for the job after reading a biography of the Apple co-founder.

“The whole excitement around Steve Jobs was very compelling to me,” he said. “I wanted to make a more global impact on health care and I thought that joining a diagnostics company would help me do that.”

Rosendorff grew disillusioned before Theranos’ misleading claims were exposed, but Perry stuck it out until December 2016, when the startup was forced to change its board in a futile attempt to survive.

With believers like these, Holmes’ dream must have seemed so close that she could hardly fail to grasp it. A couple more late nights from the engineering team, a few more magazine covers declaring her a genius, and it would be as good as done.

So where does this conviction leave the rest of us — her marks, her enablers, her investors and former fans?

Ripe for the next huckster that comes along, probably. Some Silicon Valley promises are so sweet we just can’t get enough of them. Immortality. Crypto. Flying cars. Mars. Digital harmony. Wealth beyond compare.

As Fitzgerald wrote, we will always be a sucker for the orgastic future that year by year recedes before us.