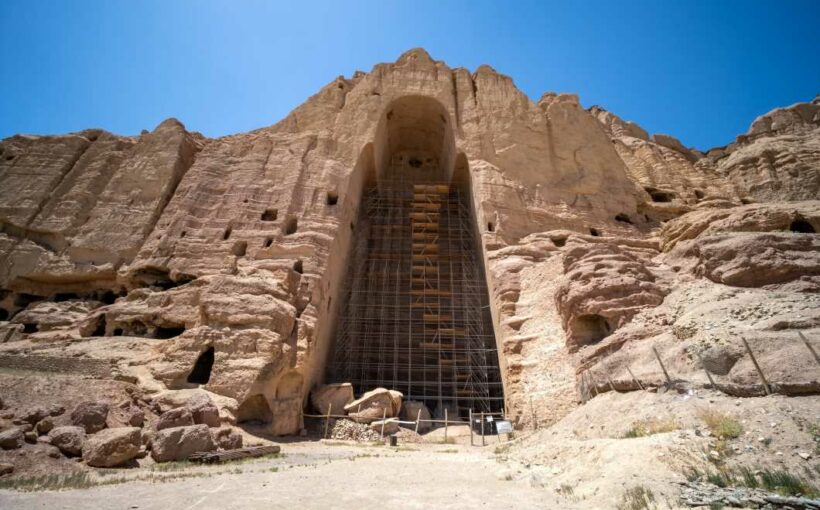 The Taliban's destruction of the Bamiyan Buddha statues in early 2001 shocked the world and highlighted their hard-line regime, toppled soon after in a U.S.-led invasion.

Now back in charge of Afghanistan and eager to present a softer image, the militant group is running the site as a tourist attraction.

For around $5, curious visitors can wander around and take photos of the giant holes in the cliff face where the ancient Buddha statues once stood.

Under a white Taliban flag, soldiers man a booth and write out admission tickets.

Sidiq Ullah, who is a supporter of the militant group, came to see the historic site this week with friends from Kandahar, around 350 miles southwest of Bamiyan. Now that the Taliban are in control, he said, he feels free to tour the country.

"I was young when these were destroyed, about 7 years old, and since then it has been a dream to come and see what happened here," he said.

"I'm happy it was destroyed. I'm here to see the ruins actually."

Carved into the face of a cliff, the two 6th century Buddha statues — one 180 feet tall and the other 124 feet tall — towered over the valley.

The area was a holy site for Buddhists on the ancient trading route between China and Europe known as the Silk Road.

When the Taliban announced their plan to destroy the statues in 2001, they had come under heavy international pressure to keep them standing. But, labeling them un-Islamic, the group brought the statues down using heavy explosives.

Since taking over the country again a few months ago, the Taliban have sought to present a more moderate face to the world despite a brutal crackdown in some areas. As the hard-line Islamic group navigates the economic and security challenges of governing the country after years of insurgency, it is also under pressure from international organizations to protect Afghanistan's cultural heritage.

"Bamiyan has always been a part of Afghanistan that the outside world has focused on," said Llewelyn Morgan, the author of "The Buddhas of Bamiyan" and a professor of classics at the University of Oxford.

"The Taliban know that and that's why in their slightly inept way they are still trying to paint themselves as a constructive government."

Caves on the cliff face were once home to Buddhist monasteries and sanctuaries.

Now those around the Buddhas are empty, while other caves farther away are home to families. Clothing flaps on laundry lines, children play in empty caves and some even have glass windows installed.

UNESCO, or the United Nations Educational, Scientific and Cultural Organization, declared the Bamiyan Valley a World Heritage Site in 2003.

It worked with the U.S.-backed Afghan government to conserve what was left of the Buddha statues after the Taliban's destruction of the site.

The organization had also backed a cultural center and museum in Bamiyan to "integrate local communities as well as to identify Bamiyan's rich cultural backgrounds," according to its website.

With the Taliban in charge, its future was unclear. UNESCO didn't respond to requests for comment.

In the days after the militant group swept back to power in the summer, UNESCO issued a statement calling for the preservation of sites like it.

"It is crucial for the future of Afghanistan to safeguard and preserve these landmarks," the agency said.

Though scaffolding remains in the niches where the Buddha statues once stood, the preservation work has now ended. Few visitors arrived when NBC News was at the site, despite the Taliban's stated willingness to welcome tourists.

Abdullah Sarhadi, the area's governor who spent nearly four years as a prisoner in Guantanamo Bay, said that the Taliban have changed and that they will preserve historic monuments.

For now, he is waiting to hear more from the upper levels of the Taliban government before making any changes to the site.

"We want to show the world there is peace and security in Afghanistan now," Sarhadi said.