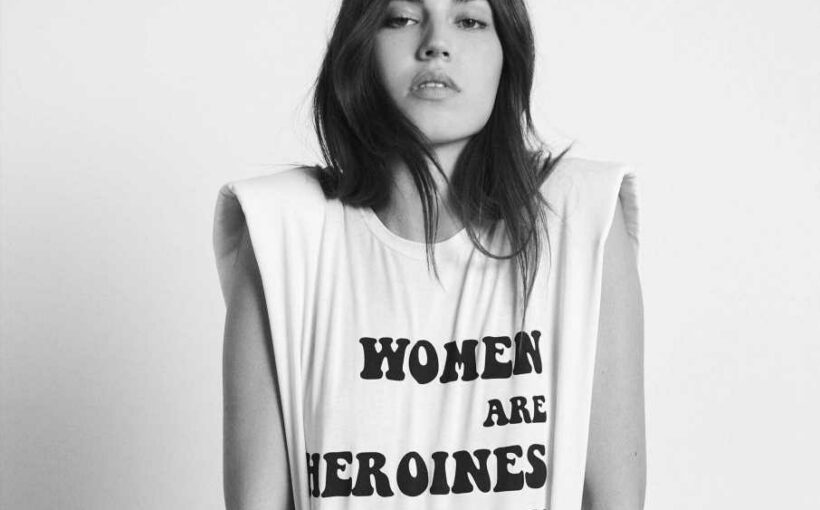 The idea that gender equity is needed may seem antiquated to some, but many brands continue to champion equal opportunities and advancement for their employees and customers.

While some launched capsule collections with women’s empowerment themes and philanthropic components around International Women’s Day on March 8, others have been rolling out virtual talks, new content and campaigns designed to support women throughout Women’s History Month, which runs until the start of April.

Companies like H&M USA and Tory Burch are using International Women’s Month to dive into yearlong initiatives. Earlier this month H&M USA began a 12-month partnership with Buy From a Black Woman, a nonprofit that connects more than 500 Black women-owned businesses nationwide. Burch’s brand has unveiled the “Empowered Women” campaign with Upworthy, a platform that celebrated women who are creating an impact in their communities.

Some companies have revved up their efforts due to consumer demand and others are trying to inspire future generations. The pandemic has taken its toll on female employment, with women having lost 5.4 million jobs compared with the 4.4 million lost by men. Women of color have been disproportionately affected compared to white women.

While some have gone the traditional route, releasing limited edition T-shirts with confidence-building messages and donating $25,000 to Girls Inc., others have taken more action-driven tactics.

Kate Hudson and Fabletics joined forces with Girl Up, a United Nations Foundation initiative that cultivates girls’ leadership and gender equality around the globe. White House Black Market has an ongoing partnership with Ladies Who Launch to help women fund and get their businesses going. 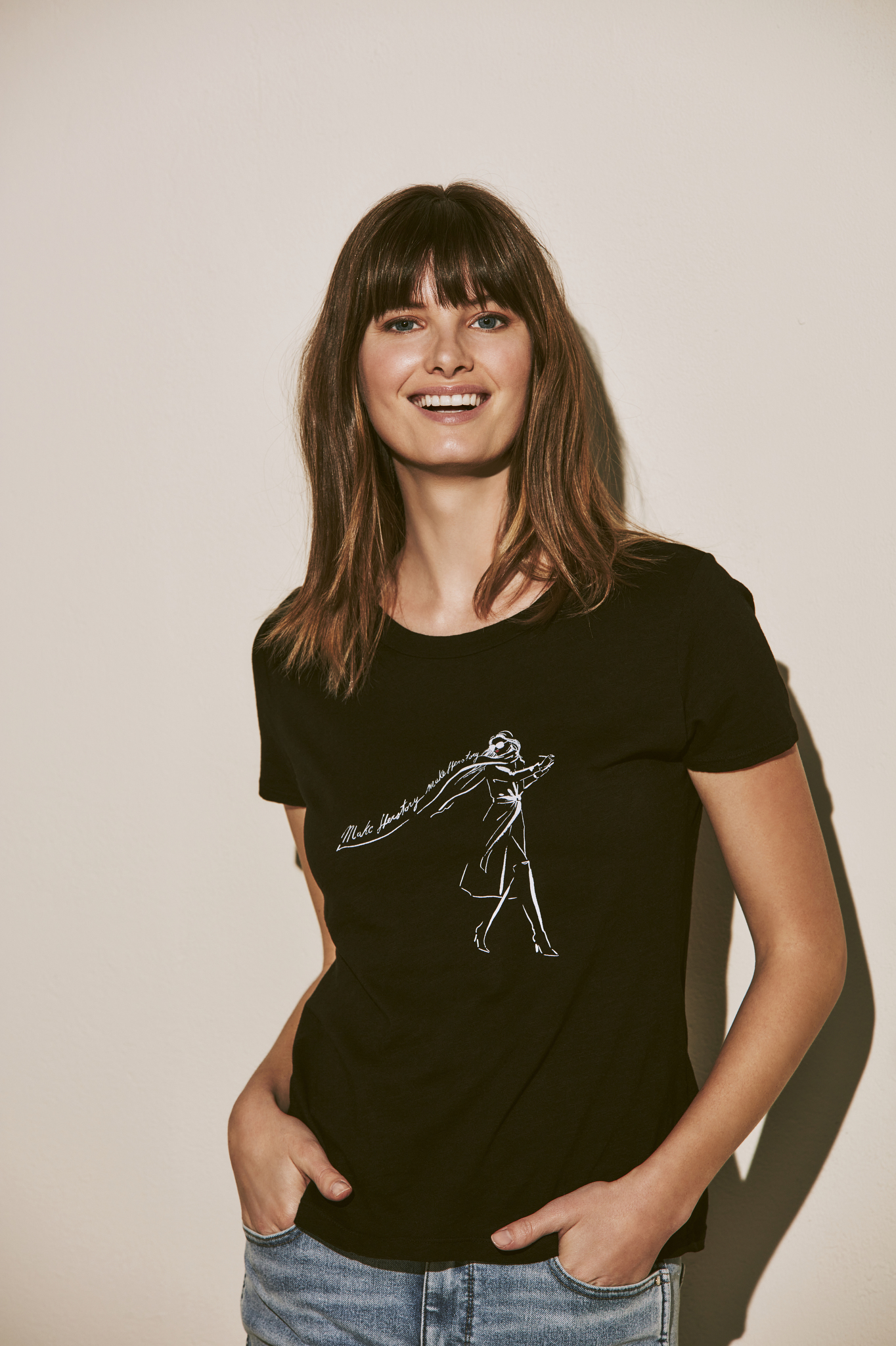 Other retailers like Nike Inc. and Puma AG are trying to give their employees access to advancement opportunities. New Balance is planning to announce a larger brand commitment to empowering women and girls in the coming months. 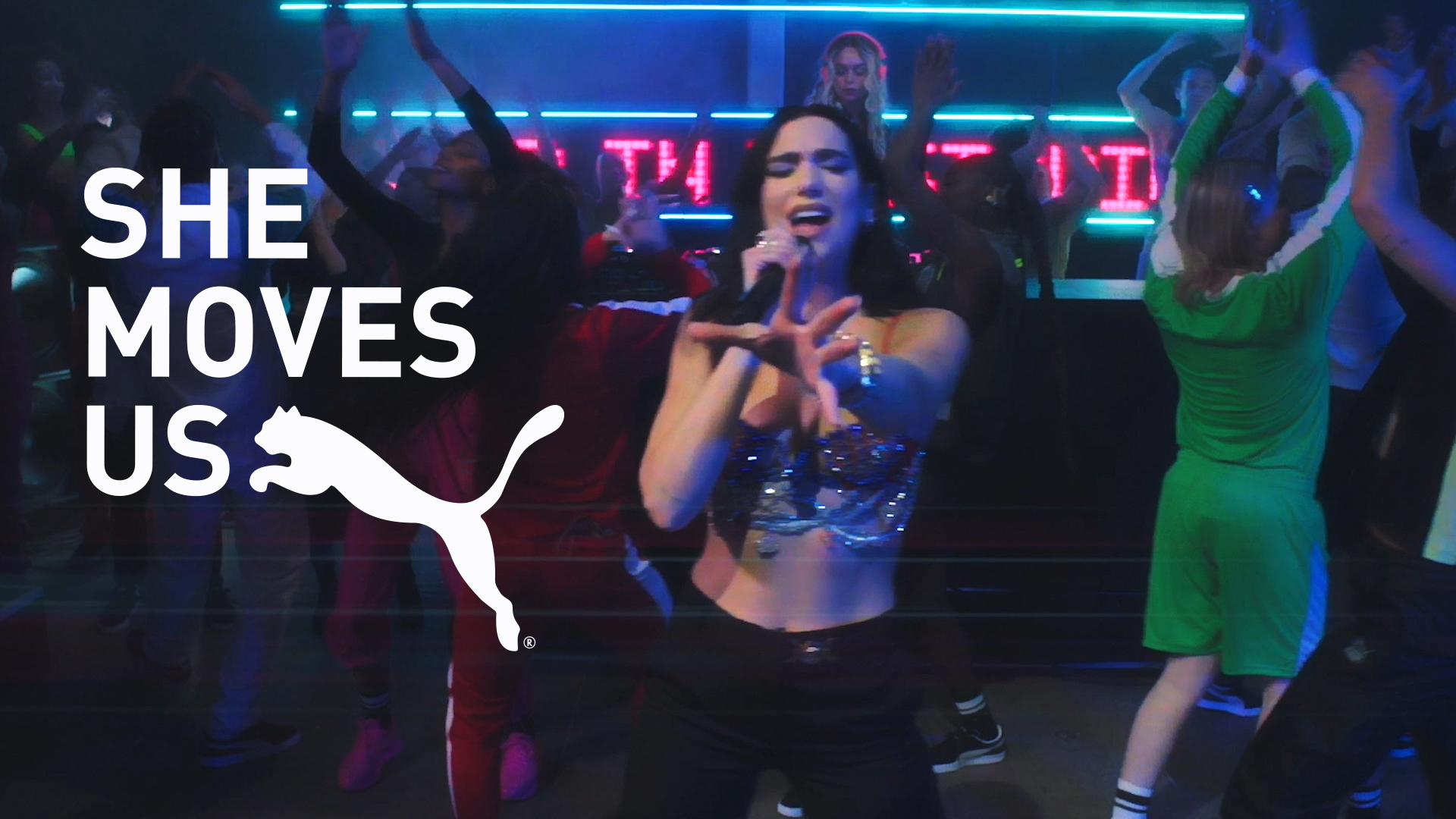 Dua Lipa in the Puma campaign. Courtesy of Puma

The coronavirus crisis is expected to push 47 million women and girls into poverty globally, jeopardizing access to food, employment and health services, according to the U.N. And millions of female apparel workers have lost their jobs. Some brands have earmarked a percentage of their sales for organizations that help women. The New York City-based Naissant is donating 10 percent of this month’s sales to international humanitarian agency CARE. Bev and Wren+Glory are donating 10 percent of their “Chicks” collaboration to Uncommon Threads. Meanwhile, Layla Love is supporting her Rise of the Butterfly nonprofit by donating all of the proceeds from her namesake collection to help survivors of human trafficking.

Other companies are trying different strategies. For IWD, the Pinterest Shop was curated with products from more than 25 women-founded small businesses. Amanda Seales of HBO’s “Insecure” has introduced the Illustrious League collection, which makes Black women’s wellness a priority. Uplifting messages and different designs are hand-drawn by the founder. The debut collection is called “Save Yourself” and centers on a serene blue color theme meant to relay an inner peace. Each box includes a piece of creative writing from Seales. And girl power is this month’s theme on Fern Mallis’ “Fashion Icons” YouTube channel. 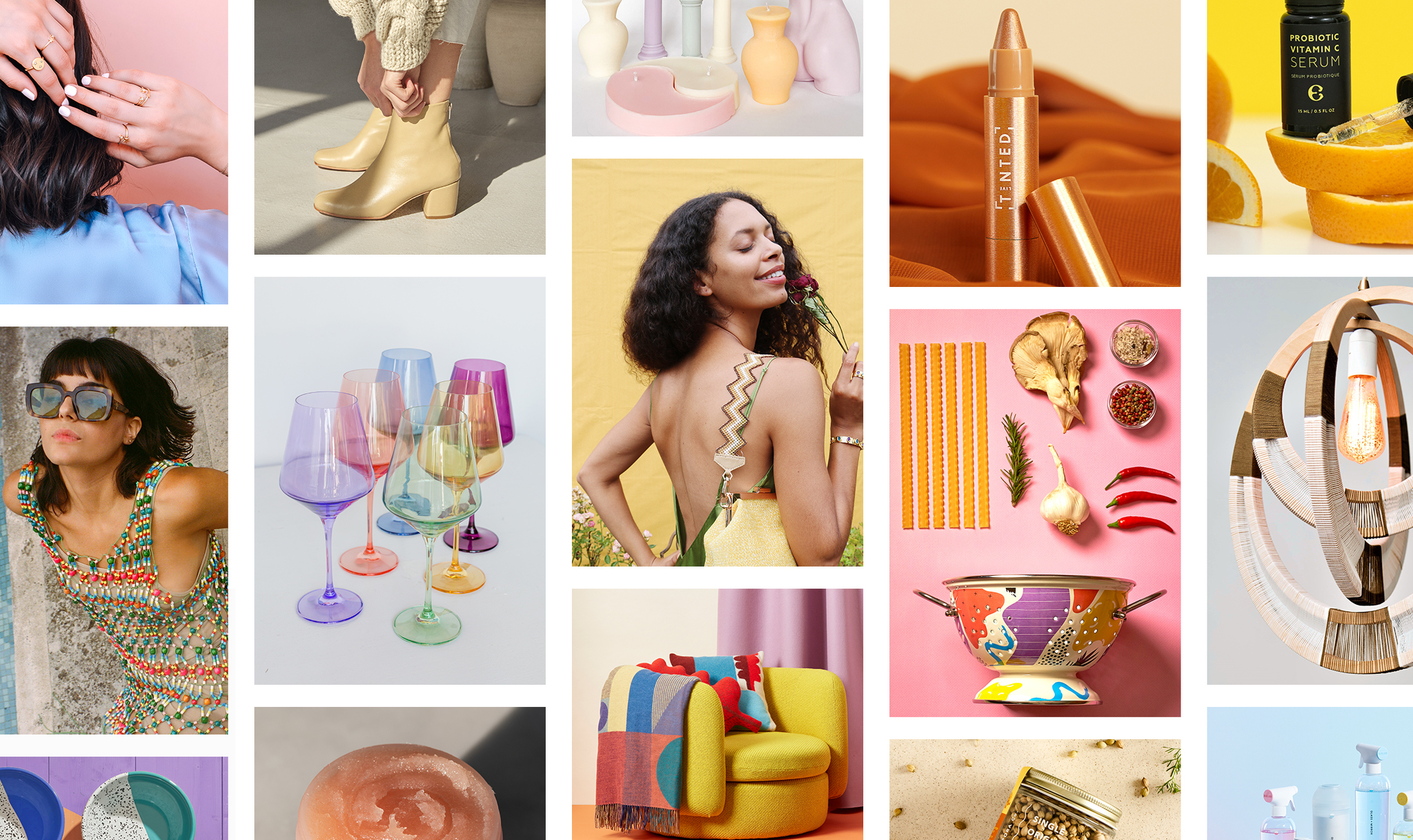 Here’s a look at what some of fashion’s key brands are doing.

In honor of WHM, Gap rolled out its 2025 goals to improve women’s empowerment in its supply chains. With more than 800,000 women and girls having completed the Personal Advancement & Career Enhancement, or P.A.C.E., program, the company expects to meet its target of one million by 2022. Participants live in communities and work in factories in 17 countries where Gap clothes are made.

Gap has also joined forces with Business for Social Responsibility, ILO-IFC Better Work and CARE to unveil [email protected] The platform will focus on creating programs focused on gender equity in global supply chains. All of Gap’s strategic factories are participating in [email protected] The Athleta and Gap brands plan to have all of their factories participating by 2025. The company’s portfolio includes Old Navy, Banana Republic, Intermix and Janie and Jack.

The micro finance nonprofit Kiva is also supporting women-owned small businesses through crowdfunded loans. In commemoration of Women’s History Month, all loans will be matched through the end of the month. More than 80 percent t of Kiva’s loans go to women annually. In the organization’s 15-year history, there has been a 96 percent repayment on the $1.15 billion that was lent to women borrowers.

This month, Ba&sh has sold more than 2,100 of its T-shirts imprinted with “Women Are Heroines Every Day.” Through the company’s initiatives with different charity partners, it will donate more than $100,000 to WomenSafe for European efforts and CARE’s “Together for Her” campaign in North America.

Started by two women, Barbara Boccara and Sharon Krief, Ba&sh’s global team is 86 percent women. Seventy-five percent of the executive committee is made up of women. There are more than 200 employees at the corporate level and more than 1,000 staffers including all Ba&sh stores. Fostering female empowerment inside and outside of the company is integral. The retailer expects to announce another initiative with a women-related charity in November, a company spokeswoman said.

Women’s empowerment is also key for Neiman Marcus, a company that was cofounded by a woman, Carrie Marcus Neiman, and the company remains a predominantly women-led organization. Women account for 57 percent of the retailer’s board, 61 percent of its executives at the vice president level and above, and 70 percent of all corporate and store employees.

This month, the retailer partnered with Fashion Makes Change, or FMC, a project of Rockefeller Philanthropy Advisors, and customers can donate to FMC. Proceeds from the campaign will support [email protected], a joint effort of the United Nations’ ILO-IFC Better Work, BSR’s HER project, CARE International and other programs that strive to empower women in global fashion supply chains. Neiman Marcus has also created a virtual series, “Ladies Who Launch,” spotlighting female entrepreneurs. As part of its “Designers of the Moment,” the luxury retail showcases women-led brands like Catherine Holstein’s Khaite, Banu Bora Mumcu and Sandra Sandor’s Nanushka, in its online magazine.

The Levi Strauss Foundation recently announced the third round of its Pioneers in Justice Initiative and is seeking nominees for female-identifying leaders of color. Research conducted by its program partner Open Impact has shown that movements led by women of color are largely overlooked for funding and leadership development. Nominations are being accepted through March 29. As part of Levi’s expanded support of apparel workers during the pandemic, there is a greater emphasis on gender equity in the supply chain.

Levi’s also joined forces with Marrisa Wilson NY for a limited edition collection. One piece the Guyanese-American designer has created is a trucker jacket with embroidery designed to resemble textured tresses to highlight the beauty of Black hair. “The trucker jacket speaks to society’s politicization of Black women’s hair and Marrisa’s own journey of acceptance of hers in its natural state,” according to press materials about the exclusive collection. 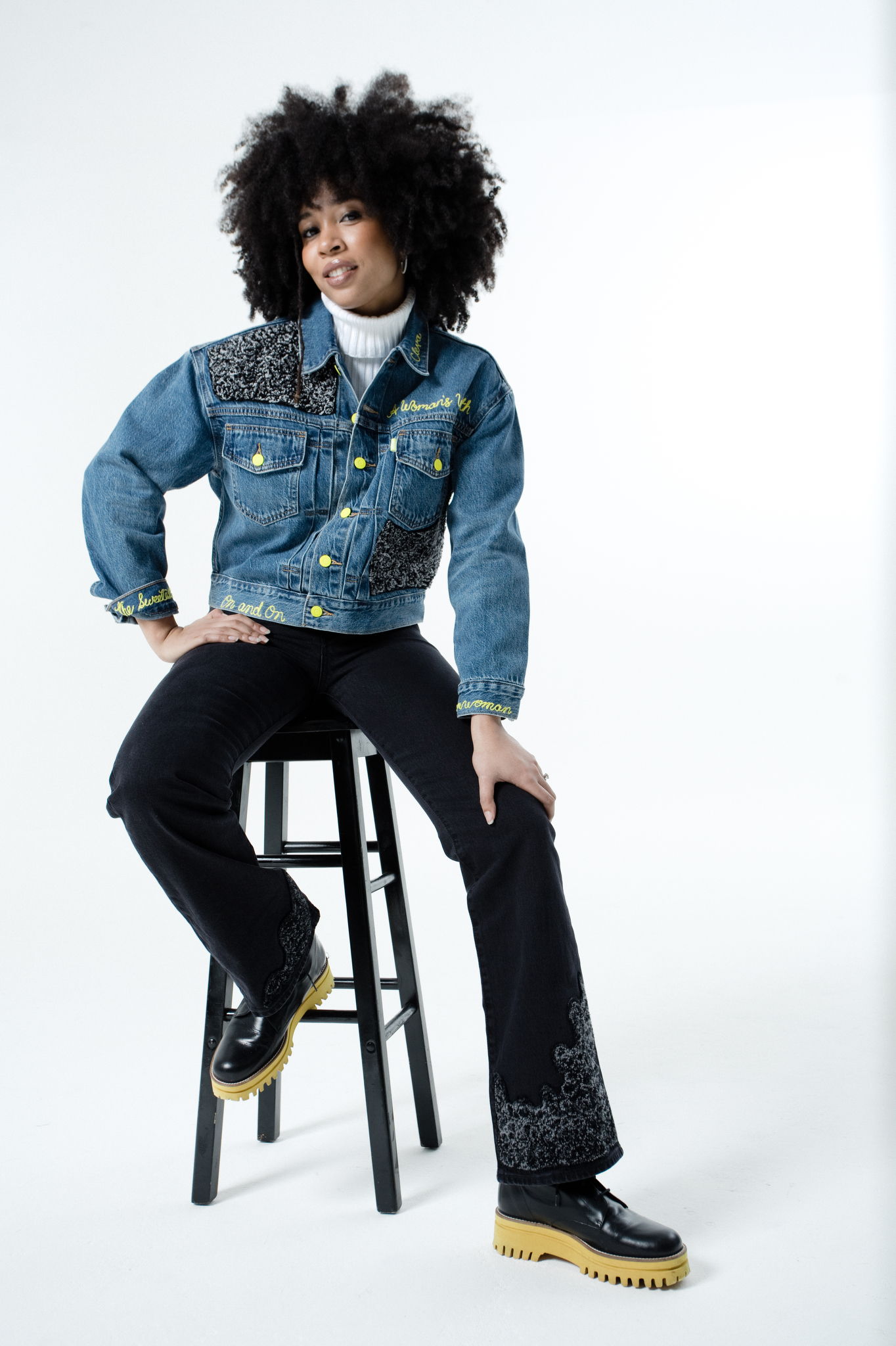 A design from Marissa Wilson’s collaboration with Levi’s. Courtesy of Levi's

Levi’s wanted to partner with Wilson since her work celebrates self expression and aims to create a diverse and connected global community of women, according to brand president Jen Sey.

“The fashion world is a challenging industry for young and independent designers, especially Black and Brown designers, and we feel it’s important to support those whose work inspires and has a bold point of view,” Sey said.

With 67 percent of its workforce being women, Burberry has been working toward ensuring its recruitment practices are inclusive, with candidate shortlists having at least a 50-50 gender split and at least 25 percent ethnic diversity.

To celebrate modern womanhood, Burberry rounded up Shakira, models Mariacarla Boscono, Jourdan Dunn and Irina Shayk, makeup artist Isamaya Ffrench and artist Jazz Grant. Wearing crisp blue Burberry shirts, the women gathered virtually to discuss what they love about being a woman. Dunn, for example, spoke about the joy of “being part of a sisterhood,” and all of the women spoke about what it means to be a woman in 2021, as well as the advice they would share with their fellow women.

As part of the initiative, Burberry made donations to London Youth and The Prince’s Trust “Women Supporting Women” initiative. The company has also signed the United Nations Women’s Empowering Principles.

”Driving gender equality across our business and communities is critical to creating a truly inclusive future, and we were inspired by the powerful reflections and the stories of the women in our celebratory film,” Burberry’s chief people officer Erica Bourne said.

Munich-based retailer Mytheresa introduced “Arts Female Future,” a charitable initiative that will spotlight four women in the arts — Marine Tanguy, Noelle Coursaris Musunka, Tiffany Bouelle and Inès Leonarduzzi. Each woman has been asked by Mytheresa to select a charity that will receive a 10,000 euro donation from the online retailer. Choose Love, Fondation de Femmes, Care France and Malaika are the recipients. With women accounting for 64 percent of Mytheresa’s workforce, the company uses IWD to support women’s charities.

Net-a-Porter designed a capsule collection with items like Amina Muaddi T-shirts imprinted with “I Got You,” Anissa Kermiche vases shaped like women’s bodies and playful Roxanne Assoulin bracelets. All proceeds will go toward the Women for Women International charity. In addition, the social media campaign #PowerToChange encourages women to post about their commitment for a better world. In turn, the retailer will donate $1 for every post sharing the hashtag.

Puma launched an International Women’s Day Pack consisting of items like $70 purple suede classic sneakers. Earlier this year the brand launched its “She Moves Us” campaign with brand ambassadors like Dua Lipa, Cara Delevingne and Skylar Diggins-Smith. As part of that yearlong initiative, Puma is rolling out talks, videos and interviews with these ambassadors about the ups and downs of their careers.

While not a new partnership, Puma’s collab with Women Win is designed to boost the visibility of female athletes and sports role models and support initiatives meant to give girls and women more access to sports. As a core funding property, Puma is contributing toward Women Win aiming to impact one million girls and women by the end of 2023.

Nike is also helping to get more children involved with sports and physical activity through its Made to Play and Nike Community Ambassador programs. So far, the company has trained more than 6,700 retail athletes from 560-plus stores to encourage children to get moving. As part of its 2025 targeted goals, Nike would like to have 50 percent girl participation in its Made to Play community programs.

Another 2025 goal for Nike is to have 50 percent of women in its global corporate workforce and 45 percent in leadership positions. Giving all women in its supply chain greater access to career opportunities is another priority. The company has also created a financial wellness benefit for employees at no cost that offers independent financial coaching and education for all U.S. employees.

In its recently released 2020 impact report, Nike acknowledged that while mental health and wellness are important to all genders, women and girls “often face unique challenges.” Without being more specific, Nike said that’s why the company is partnering with the nonprofit Crisis Text Line in the U.S. to help expand access to free, round-the-clock mental health support via text for athletes in need.

Avec Les Filles is donating a portion of all sales from its site to Girls Inc. Last summer the brand started a foundation to raise funds and awareness for such women’s issues as body image, sex trafficking and bullying. Currently, 71 percent of the company is comprised of women. Avec Les Filles hopes to announce a few new partnerships later this year around its fall outerwear launch, a company spokesperson said.