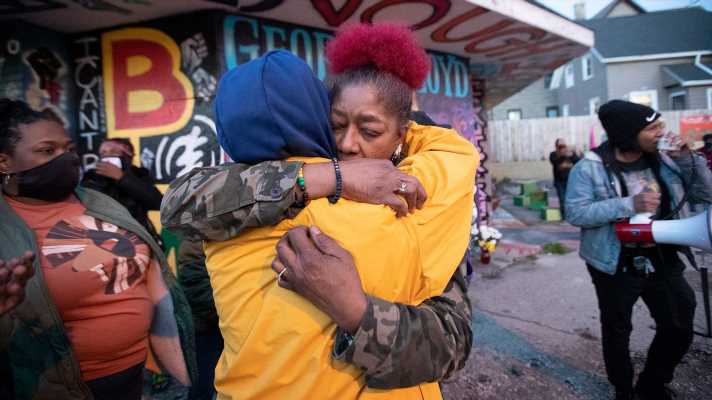 Around the country, as celebrations erupted Tuesday following Derek Chauvin’s guilty verdict for the murder of George Floyd, those on the front lines of fighting for racial justice said the verdict represents a likely boon for the movement going forward, an impetus for systemic change on par with major events of the 1960s.

“This is our Selma moment,” said NAACP president Derrick Johnson, citing the event in which Alabama marchers headed to the state capitol in Montgomery were attacked by state troopers with nightsticks and tear gas, an incident that ultimately sparked passage of the Voting Rights Act of 1965.

Floyd’s death last year, along with the killing of Breonna Taylor, sparked a national reckoning on race that with Tuesday’s verdicts marked a moment of catharsis for a country wracked by division. A jury found Chauvin, 45, guilty of second-and third-degree murder and second-degree manslaughter,

The moment, Johnson said, has the potential to similarly galvanize support for the George Floyd Police Reform Act, a 2020 measure targeting police misconduct, excessive force and racial bias in policing.

“This should be a catalyst,” Johnson said. “It is an opportunity for Congress to do what’s necessary to make sure our communities can have trust in police agencies and feel safe.”

President Joe Biden himself said the decision could be “a moment of significant change” while calling for passage of the reform bill, and for some, the verdicts felt both empowering and vindicating — a reassurance that the activism they devoted themselves to had been worthwhile, even as they had had their occasional doubts.

Derek Chauvin trial: Across the US, cheers fill city streets after Derek Chauvin is convicted in the death of George Floyd

“Sometimes it felt like we were even smaller than a David facing Goliath,” said co-director Melina Abdullah of Black Lives Matter Los Angeles. “There were times when we’d demonstrate and there’d be, like, five of us, and we felt like it might be insurmountable. But what the last year has taught me that there are moments of awakening where the entire world wakes up.”

As she watched the verdict at home with her kids, Abdullah said her emotions took her by surprise: Not just relief and elation, but a sense of faith. in the people who she said had helped make it possible.

“It’s an affirmation of the work that’s been put in over the last year,” she said. “Since the moment George Floyd’s life was stolen, people have taken to the streets and issued demands, and what we have seen in this moment is that that bears fruit, that organizing works. We can not only reform but transform the system.”

Brianna Raine (left) and her mother Marvalyn Raine, both of Chicago, embrace outside the Hennepin County Government Center in Minneapolis immediately after the verdict was announced. (Photo: Mike Thompson/USA TODAY)

“It used to feel hopeless,” she said. “But the George Floyd movement solidified everything I believe: That the power truly belongs to the people. To every single activist, anyone who went to a rally or blacked out their social media: Know that you are powerful.”

Cries of “Guilty! Guilty!” swelled around her as she spoke.

“Today, a Black life truly mattered,” Newsome said. “It showed the police that they can’t go on killing, that they can no longer hide behind a badge.”

In Rhode Island, Ray Rickman watched from his couch and waited for that very long hour before the verdicts were read, frightened the jury would serve up a half-serving of justice and fail to convict Chauvin of the most serious charge of second-degree murder.

“And when the judge read it — guilty — I got tears in my eyes,” said Rickman, executive director of Stages of Freedom, an organization supporting Black youth through cultural activities in Providence, Rhode Island. “This is an individual going to jail, but the truth is that this is a blessing for the nation. We’ve seen this a hundred times – police don’t get indicted, much less go to trial.”

Rickman said the decision represents a small but consequential rupture in the proverbial Blue Line that cuts through a broken criminal justice system.

“I believe the American people have been educated that it’s not okay for cops to kill someone just because they feel like it,” Rickman said. “And that’s what George Floyd has done for us.”

“The real victory here is not the incarceration of Derek Chauvin,” Murch said. “Putting another person in a cage is not how we change the world. But stopping the killings of Black people with complete impunity, saying that Black lives matter — this sends that signal.”

For Cephus “Uncle Bobby” Johnson, whose 22-year-old nephew, Oscar Grant, was killed in 2009 by a Bay Area Rapid Transit officer who said he mistook his gun for his Taser, the moment was in many ways a release.

“Oh man, I was full of emotions,” said Johnson, who helped found Love Not Blood Campaign, a police reform advocacy agency in Oakland, California, after Grant’s death. “I’m extremely glad that it came down the way it came down, and I’m hopeful that some changes are finally beginning to take place.”

Related: What are the odds Derek Chauvin is successful in appeal of guilty verdict in George Floyd murder?

A not-guilty verdict, he said, would have prolonged the continued implosion of a nation he sees divided among racial lines.

“There’s a lot of pain that Black people have been enduring for years without feeling that justice was done,” he said. “This allows people to take a breath and have some hope that maybe the tide is turning, that police officers who witness this will act in a more conscionable way. But we still have a way to go.”

‘We still have a lot of fighting to do’

So despite that major step, activists and leaders cautioned that the path toward racial justice remains long.

“This gives us some hope for the movement,” said Utah State Representative Sandra Hollins, a Democrat. “But we still have a lot of fighting to do. There’s still a number of people out there who are hashtags, who need justice.”

Hollins, Utah’s first Black female representative, had watched the verdict from her kitchen table with her husband and daughter, so overcome at the outcome that she teared up, her anxiety over the case relieved. In 2018, she sponsored a state bill in 2018 to remove references to slavery from the constitution, an effort that intensified as protests raged around the country last summer and passed overwhelmingly as a ballot measure in November.