Home » Business » To Know How Investors are Weighing Economic Growth, Watch this Number 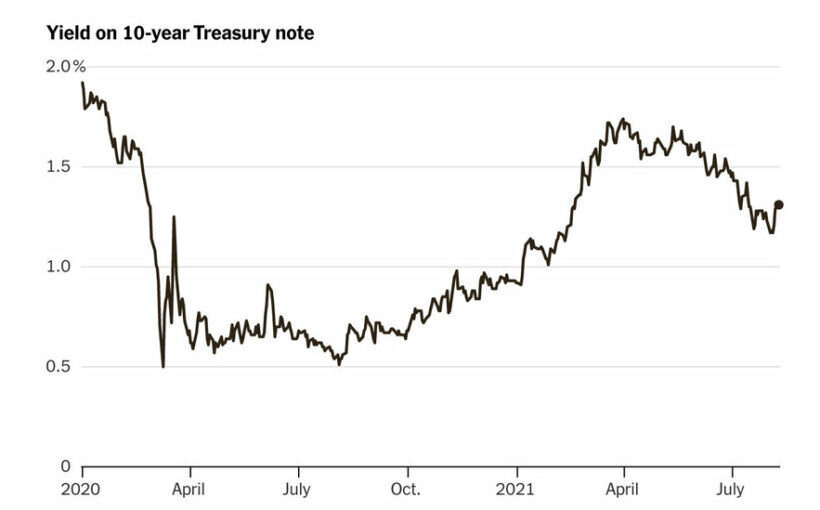 There are many ways to assess the prospects for economic growth — from the performance of the stock market, to the latest unemployment data, to inflation. But when none of those send a clear signal about the state of the economy, there’s one reading that investors, traders and economists often rely on: The yield on the 10-year Treasury note.

On Wall Street, the yield on this heavily traded United States government bond — often called the T-note — is a closely watched gauge of sentiment in financial markets. Generally speaking, when yields on the T-note rise, it means expectations for economic growth and inflation are rising.

That’s because when investors are bullish, they sell bonds — which are generally deemed safe investments — and buy stocks, which are riskier. That pushes bond prices down and yields up. Conversely, yields fall when investors grow concerned about the economy because they buy more bonds, which pushes up their price. So bond yields provide a shortcut to the thinking of investors.

And recently, they’ve been falling.

Early this month, the yield on the T-note fell below 1.20 percent, reaching as low as 1.13 percent, the lowest since early February. It has slowly crept up to about 1.35 percent since then.

“The markets are very focused on the 10-year note,” said James Bianco, president of Bianco Research, a financial market research firm in Chicago. Mr. Bianco attributed the attention to investors who were trying to get a read on the direction of the economy. “The market seems to be worried that growth is at risk because Covid is going to lead to restrictions,” he said.

It’s a very different scenario from just a few months ago, when the prognosis for recovery was strong. In March, the yield on the note was rising quickly, suggesting that investors expected the U.S. economy to rebound swiftly from the pandemic. Vaccinations were rolling out, and stimulus payments to Americans were pouring in. Job growth appeared steady, with nearly 800,000 jobs created in March. President Biden outlined an infrastructure plan that called for trillions in government spending, adding another boost.

The yield on the 10-year note rose to about 1.75 percent, the highest since January 2020, before the pandemic hit. In those weeks, the conversation among traders and economists focused on the risk that sizzling economic growth and additional stimulus could set off an inflationary spiral, push up prices and force the Federal Reserve to raise interest rates relatively soon.

Then came the Delta variant. As the highly contagious version flared across the United States, cities and states were forced to slow down their reopening plans, even as the rate of vaccinations slowed. And, as renewed worries about Covid overtook fears of runaway inflation, the return on the T-note tumbled, too.

The bumpy ride in the bond market mirrors a broader one-step-forward, two-steps-back dynamic that has become familiar to investors over the past decade or so. Since the slow recovery from the 2008 financial crisis — annual growth has averaged roughly 2.3 percent since 2010 — the economy has frustrated forecasters who predicted a return to the fast economic growth and higher inflation that prevailed in earlier decades.

At points when the economy has stumbled, bond yields have often come into focus as the surest sign of investors’ thinking.

In 2012, yields on Treasuries plunged to record-low levels as investors rushed to buy bonds after a sharp cutback in federal spending — along with slowdowns in China and Europe — that weighed on growth. And in 2016, when the economy suffered a growth slowdown that some now refer to as an “invisible recession,” bond yields tumbled sharply, hitting record lows that July.

When both the Trump and Biden administrations poured trillions of dollars into the economy during the pandemic, some expected that the fire hose of deficit spending would provide a short-term lift to growth and help the economy build up enough steam to eventually break the pattern of slow growth. But while government spending did juice the recovery — the economy has already rebounded from the sharp but brief recession last year, and is expected to grow more than 6 percent this year, the fastest pace since 1984 — the bond market is telling a less upbeat story.

Dan Ivascyn, group chief investment officer at PIMCO, a giant manager of bond funds, said that the drop in the T-note yield partly reflected investors’ pessimism about a recovery, even after the historic stimulus efforts.

“I do think that the markets are looking at the situation, you know, looking at cycles since the early 1980s and saying, look, if this is insufficient to meaningfully change the growth and inflation process, what will?” Mr. Ivascyn said.

On Wednesday, the latest data on inflation did little to change that view. Consumer prices increased 0.5 percent from June to July, a slowdown from previous months, suggesting that the surging price gains seen earlier this year aren’t going to last.

“You just have a lot of sand in the gears that’s slowing or reducing the recovery momentum,” he added, pointing to vaccine requirements at restaurants and other measures. “We believe a lot of that’s reflected in the recent pricing,” he said of the decline in yields.

Delta’s impact — which is far greater outside the United States — is also weighing on the global growth outlook. Resurgent rates of infection in Japan, South Korea, Indonesia and Vietnam have prompted new restrictions, possibly setting back the recovery of the global supply chains.

“Setbacks in Asia could spill over to the U.S. at a time when supply chain disruptions are already the most severe and widespread in decades,” analysts at Goldman Sachs wrote in a note published last week. They added that such supply chain struggles were a key reason that economic growth in the United States was slower than they had expected in the second quarter.

But Delta isn’t the only economic disappointment in recent weeks. Investors now see that the flow of federal government spending, which propped up the economy last year, is slowing fast. Income growth and consumer spending, which surged last year thanks to giant government transfer payments, are flattening out. Savings rates, which were also lifted by stimulus payments and unemployment benefits, have tumbled as government stimulus checks have been spent.

The government’s central role in keeping the economy going was in focus again on Tuesday, when the Senate passed a roughly $1 trillion bipartisan infrastructure bill. The yield on the 10-year note rose to its highest level since mid-July, roughly 1.35 percent, well below the highs of earlier this year.

But not everyone agrees with the story the bond market seems to be telling.

“I just don’t buy it,” said Lisa Shalett, the chief investment officer at Morgan Stanley Wealth Management. She pointed out that trading activity usually declines sharply in August, when many Wall Streeters go on vacation. When trading is thin, prices in the bond market can move to extremes that might exaggerate how much of a downturn in the economy investors see in the future.

At the same time, the stock market has continued to perform well, with the S&P 500 up about 18 percent in 2021. Although stock market investors don’t appear overly concerned about slowing growth, some of the activity in that market is partly a result of the lower yields in the bond market. Low bond yields translate into skimpy interest payments for bond investors, driving some to invest their money elsewhere. The stock market is the most obvious option.

“You’re seeing a lot of people just say, I can’t buy bonds, so I have to buy equities,” said Amy Raskin, chief investment officer at Chevy Chase Trust, an investment management firm based in Maryland. “Equity allocations are moving up and up and up.”