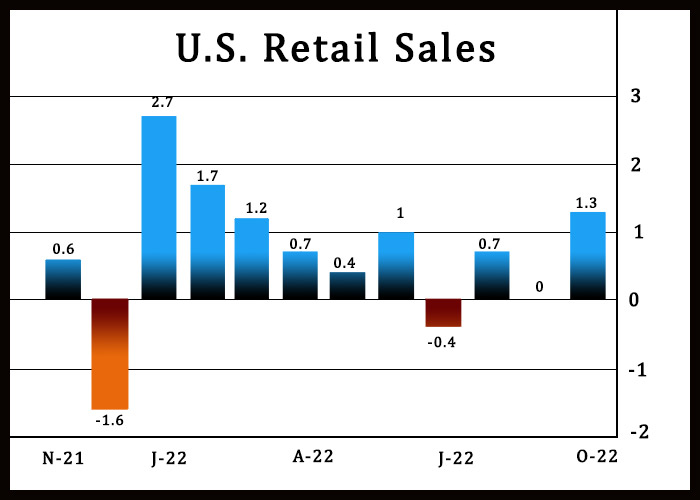 Retail sales in the U.S. showed a significant increase in the month of October, according to a report released by the Commerce Department on Wednesday.

The report showed retail sales surged by 1.3 percent in October after coming in unchanged in September. Economists had expected retail sales to jump by 1.0 percent.

Excluding a sharp increase in sales by motor vehicle and parts dealers, retail sales still shot up by 1.3 percent in October after inching up by 0.1 percent in September. Ex-auto sales were expected to rise by 0.4 percent.

The much stronger than expected ex-auto sales growth was partly due to a substantial rebound in sales by gas stations, which spiked by 4.1 percent in October after plunging by 3.7 percent in September.

On the other hand, sales by department stores pulled back sharply, while sales by electronics and appliance stories and sporting goods, hobby, musical instrument and book stores edged lower.

“Overall, we now forecast that real consumption growth will accelerate to 3% annualized in the fourth quarter, from 1.4% in the third,” said Paul Ashworth, Chief North America Economist at Capital Economics. “Fourth-quarter GDP growth is now tracking at 1.4% annualized.”

“We still think the economy will slide into a mild recession in the first half of next year, but our conviction in that call is not as strong as our belief that inflation will come down sharply regardless of what happens to the real economy,” he added. “Much more of this from the U.S. consumer, and we might be in for a soft landing after all.”