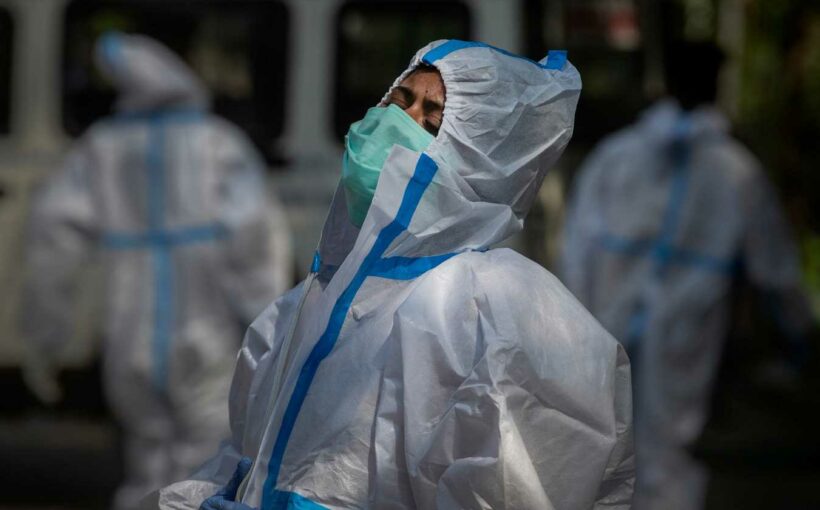 The U.S. passed 1 million coronavirus cases a year ago on Wednesday. Today, it has more than 32 million cases, according to the Johns Hopkins University dashboard.

It had topped 57,000 deaths during the pandemic at that time. Today, the country has suffered more than 573,000 deaths.

But deaths in the United States have finally fallen below the pace they were at before the fall surge took off.

The mark of 4,880 American dead in a week set Oct. 3 was finally broached Friday. Between those dates, 360,437 Americans were reported dead of COVID-19, a USA TODAY analysis of Johns Hopkins University data shows.

Meanwhile, in other parts of the world, cases and deaths are rising.

323,144 new infections Tuesday raises India’s total past 17.6 million. It ended a five-day streak of recording the largest single-day increases in any country throughout the pandemic, but the decline likely reflects lower weekend testing rather than the reduced spread of the virus. The health ministry also reported another 2,771 deaths, with roughly 115 Indians dying every hour.

President Joe Biden said the U.S. is sending “a whole series of help” to India to combat the coronavirus, including life-saving therapeutics and parts to help make vaccines.

And Mexico’s pandemic deaths have risen above 345,000, though officials say most states in the country are not seeing any rebound in coronavirus cases.

Also in the news:

►Veteran Hawaii State Sen. Kalani English said Tuesday he will retire on May 1 after being diagnosed with long-term effects of COVID-19.

►Oregon Gov. Kate Brown said rising COVID-19 hospitalizations threaten to overwhelm doctors and she is taking steps that will impose restrictions in 15 counties, including a ban on indoor restaurant dining.

►A child who traveled to Hawaii with his vaccinated parents has died after contracting COVID-19. The Hawaii Department of Health said Tuesday that the boy was younger than 11 and had a known underlying medical condition before being infected with the coronavirus.

►A Southwest Airlines flight attendant has filed a wrongful death lawsuit against the airline, alleging that lax COVID protocols during mandatory training last summer and slack contact tracing after an attendee tested positive led to her husband’s death from the virus.

►As the federal government works to make COVID-19 vaccines available to all Americans, lawmakers in more than 40 states have introduced legislation that would forbid mandates requiring people to get vaccinated.

►Up to 60 million doses of AstraZeneca vaccine could be exported in the coming months, according to The Associated Press, as the drop in demand is leading some states to turn down vaccine shipments.

📈 Today’s numbers: The U.S. has more than 32.1 million confirmed coronavirus cases and 573,000 deaths, according to Johns Hopkins University data. The global totals: More than 148 million cases and 3.1 million deaths. More than 297.5 million vaccine doses have been distributed in the U.S. and 232.4 million have been administered, according to the Centers for Disease Control and Prevention.

📘 What we’re reading: Have a loved one who doesn’t want to get the COVID-19 vaccine? Here’s how to talk to them.

Keep refreshing this page for the latest updates. Want more? Sign up for our Coronavirus Watch newsletter for updates to your inbox and join our Facebook group.

The federal government plans to allocate some 765,500 doses of the single-shot Johnson & Johnson vaccine after two weeks without, bringing the nation back to about 9.6 million first-doses next week, Department of Health and Human Services data released late Tuesday shows.

The current week’s allocation was about 8.8 million first doses, all of Pfizer and Moderna, federal worksheets show. The federal government removed a pause on Friday night from use of the Johnson & Johnson vaccine, which very rarely caused an unusual clotting disorder. Government advisers said the J&J vaccine would save far more lives than it would risk.

Chicago’s top epidemiologist said the city plans to announce a form of vaccine passport next month that would give vaccinated residents access to certain events.

“We’re interested in thinking about ways to try to incentivize people,” Dr. Allison Arwady, commissioner of the Chicago Department of Public Health, said in a briefing Tuesday afternoon. “Younger people in particular may be excited about the idea of getting into events, for example, that might be limited to people who are vaccinated.”

Arwady said the city was working with club organizers and planning concerts and other events through its “Vax Pass” program.

She said the city will also be releasing more details about its “Vax and Relax” program with barbershops and beauty and nail salons, where residents who get vaccinated may receive a free haircut or manicure.

New masking guidelines from the Centers for Disease Control and Prevention say fully vaccinated Americans don’t need to wear a mask outside.

During a White House briefing Tuesday, public health officials said fully vaccinated individuals can unmask while walking, running, hiking or biking outdoors alone or with members of their household.

Largest firefighting plane may be sold for COVID response

As Western states prepare for this year’s wildfire season, the world’s largest firefighting plane has been grounded and could be converted to help fight against another crisis, the COVID-19 pandemic.

After investing tens of millions into upgrading the Global SuperTanker and its technology, the revenue coming mostly from contracts with the U.S. government and California did not produce enough profit for the company to continue the funding the tanker, said Roger Miller, managing director at Alterna Capital Partners LLC, the investment company that owns the plane.

Alterna’s decision to ground the SuperTanker was made on April 19, according to the firm, which had funded the plane’s operations and upgrades since 2016. Since the announcement, the Connecticut-based firm has received several offers to buy the SuperTanker and turn it into a freight carrier aircraft, Miller said.

The investment firm is open to potential investors who want to continue using the SuperTanker for wildfire response, but if freight companies present a more attractive offer, the firm will sell it to them, Miller said.