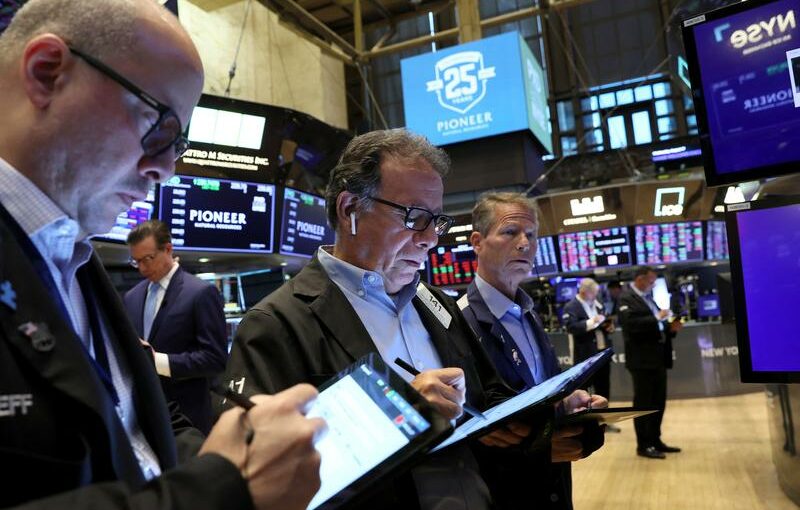 (Reuters) -The S&P 500 and the Nasdaq rose on Thursday on support from growth and semiconductor stocks, while investors eyed the Federal Reserve’s Jackson Hole conference for clues on its policy outlook.

Fed Chair Jerome Powell is due to give a speech on Friday that will be scrutinized for any indication that an economic slowdown might alter the central bank’s strategy.

“The Fed is going to remain pretty resolute and vigilant in their campaign to combat and break the back of inflation,” said Todd Lowenstein, chief equity strategist of the Private Bank at Union Bank.

“The market has sort of wishful thinking around Fed coming to rescue for any market difficulty right now.”

Data earlier in the day showed the U.S. economy contracted at a more moderate pace than initially thought in the second quarter, dispelling some fears that a recession was underway.

Traders are now seeing a slightly greater likelihood of a third 75-basis-point interest hike from the Fed at its policy meeting next month, compared with a 50-basis-point increase. [FEDWATCH]

Fed officials were on Thursday noncommittal about the size of the interest rate increase at the Sept. 20-21 meeting, but reiterated the view that rates will rise and stay high until inflation has been squeezed.

Investors will also be looking for details on the Fed’s plans to reduce its nearly $9 trillion balance sheet.

Most high-growth and technology stocks advanced in mid-day trading, with Amazon.com Inc and Alphabet Inc adding more than 1% each, as Treasury yields dipped after four straight sessions of gains. [US/]

But electric-vehicle maker Tesla Inc slid 1.0% after its 3-for-1 stock split came into effect.

Banks added 1.6%, with Citigroup Inc up 2.2% after saying it plans to close its consumer and commercial banking businesses in Russia starting this quarter.

Capping gains on the blue-chip Dow, Salesforce Inc fell 5.5% as it cut its annual forecasts over “measured” spending from clients and a hit from a stronger dollar.

Graphics chip designer Nvidia Corp rose 3.0% even as it forecast a sharp drop in revenue for the current quarter on the back of a weaker gaming industry.

“Investors are likely to view this as a clearing event and a positive for the stock as it is likely that further downside is limited beyond Q3,” Goldman Sachs analysts said.