Home » Business » 'We are not drowning, we are fighting': Countries vulnerable to climate disaster issue rallying cry 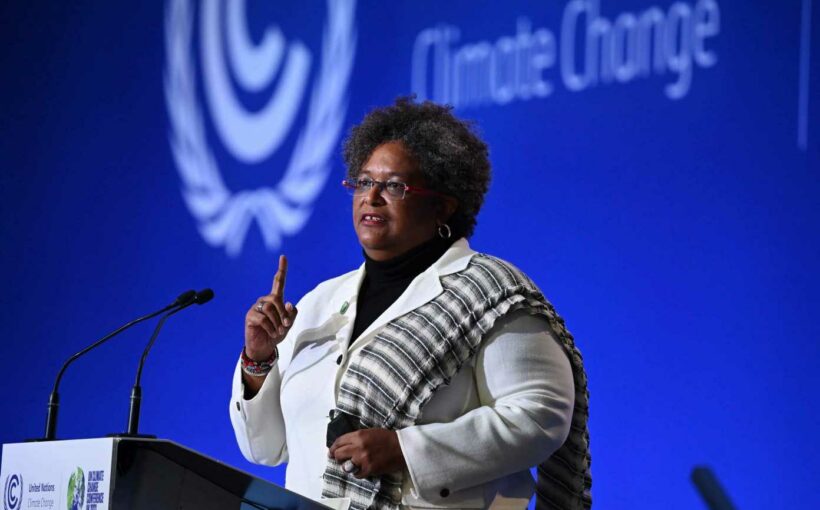 GLASGOW, Scotland — World leaders, campaigners and environmental activists representing people most threatened by climate change issued a defiant "warrior cry" at the COP26 summit on Monday: Do not compromise on 1.5 degrees Celsius.

The meeting, which formally opened on Sunday and will run through to Nov. 12, has been billed as humanity's last and best chance to prevent the worst of what the climate crisis has in store.

"The real question is whether you have the political will to do the right thing, to wield the right words and to follow it up with long overdue action. If you're looking for inspiration on this, look no further for the climate leadership of young Pacific people," Brianna Fruean, environmental advocate for Samoa, said at COP26 on Monday.

"We are not just victims to this crisis. We have been resilient beacons of hope. Pacific youth have rallied behind the cry: 'We are not drowning, we are fighting.' This is our warrior cry to the world."

"This is my message from Earth to COP," Fruean said. "I hope you remember my words today and look closely at your words as you go throughout COP."

This temperature threshold is a crucial global target because beyond this level, so-called tipping points become more likely. For instance, the world's small island nations, among those least responsible for climate change, are already seeing island territories slowly being inundated by rising sea levels.

Ibrahim Mohamed Solih, president of the Maldives, opened his national statement on Monday by repeating an appeal he had issued several times before: "I have no choice but to keep on repeating it. What will it take for you to listen to us?"

"Our islands are slowly being eaten by the sea, one by one. If we do not reverse this trend, the Maldives will cease to exist by the end of the century."

Like many leaders representing populations on the front lines of the climate crisis at COP26, Solih called on policymakers in the global north to finally make good on unfulfilled promises and to provide low income nations with $100 billion to help adapt to the impact of rising temperatures.

He also warned delegates assembled in Scotland's largest city that a global average temperature rise beyond 1.5 degrees Celsius constitutes a "death sentence" to the Maldives.

"Please," he said. "Please do not let this opportunity go to waste."

The U.N. has said the world is currently on a "catastrophic pathway" to 2.7 degrees Celsius of heating by the end of the century and warned the stakes for COP26 "couldn't be higher."

To have any chance of capping global heating to 1.5 degrees Celsius, the aspirational goal of the landmark 2015 Paris climate accord, the world needs to almost halve greenhouse gas emissions in the next 8 years and reach net-zero emissions by 2050.

"We do not want that dreaded death sentence and we have come here today to say: Try harder," Mottley said.

Burning fossil fuels, such as coal, oil and gas, is the chief driver of the climate crisis.

Yet, despite a flurry of net-zero emission goals and increased pledges of many countries, some of the largest oil, gas and coal producers have failed to outline how they plan to drastically scale down fossil fuel use.

'We have no more time'

Txai Surui, a 24-year-old indigenous climate activist from the Brazilian Amazon, said at COP26 on Monday: "Today the climate is warming, the animals are disappearing, the rivers are dying, and our plants don't flower like they did before."

In early August, the world's leading climate scientists delivered their starkest warning yet about the deepening climate crisis.

A bombshell report by the U.N.'s climate panel said limiting global warming to close to 1.5 degrees Celsius or even 2 degrees Celsius "will be beyond reach" in the next two decades without immediate, rapid and large-scale reductions in greenhouse gas emissions.

Farhana Yamin, a climate lawyer and advisor to the Climate Vulnerable Forum, a group that represents about 48 nations on the front line of climate impacts, told CNBC in the run-up to COP26 that the summit must constitute a "justice reset" if it is to be considered successful.

"What is the code after code red? I don't know," Yamin said, referring to Guterres' comments. "Success can only come from grasping hard truths, speaking honestly and recognizing the situation of vulnerable countries."

It is not good enough, she added, for those at COP26 to continue talking about their optimism for the future when countries are nowhere close to meeting the demands of the climate emergency.