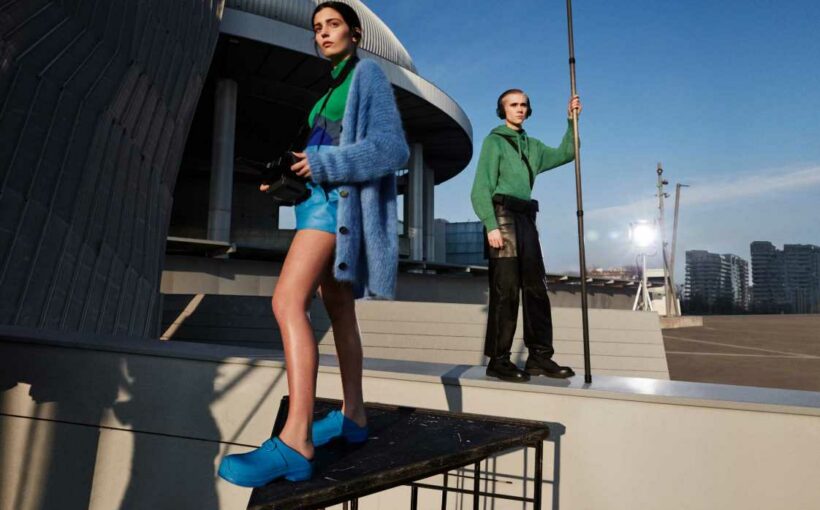 MILAN — Can an encounter on a film set result in a love story? Yes, according to Wim Wenders and Salvatore Ferragamo.

The acclaimed movie director and the luxury brand teamed up on the creation of the Florentine label’s fall 2021 advertising campaign, promoting the last collection designed by former creative director Paul Andrew.

In keeping with the futuristic vibe of the lineup, Wenders conceived a sci-fi movie-inspired video titled “A Future Together.” Chronicling a nascent love story on the set of a sci-fi adventure, the video protagonists are a film director, interpreted by Italian emerging actress Gaia Girace — who made her international debut as Lila Cerullo in TV show “My brilliant friend” based on Elena Ferrante’s namesake book — and a sound engineer, a role played by Swedish artist and musician Felix Wilhelm Sandman, member of popular boy band FO&O. Working together on the set, the two get to know one another eventually fall in love.

Conceived by Wenders with the goal of “looking at the future with optimism,” the commercial was filmed at Milan’s City Life new retail development.

Here, Wenders discusses with WWD the concept behind the campaign and reveals details about its “making of.”

WWD: The sci-fi atmosphere tends to be dark and gloomy. How did you introduce positivity?

Wim Wenders: You point your finger right to the heart of the problem. Most science fiction is dystopian. Can you remember a sci-fi film that painted an optimistic picture of the world? I can’t. I guess that’s because science fiction, in its nature, deals most of all with the era out of which it is made. Its idea of the future is driven by the respective present tense. Sci-fi films always describe the greatest fears of the times in which they were conceived.

All of us today, still living in the constraints and horror of the only pandemic our generations have ever faced, we are not exactly looking into a hopeful future, with the climate crisis, the migration problem and the unresolved question of poverty looming over everything. So today, more than ever, a positive outlook was and is a challenge. How do you overcome that? If you had time to develop a real story, I could think of a few solutions. But in a commercial, you don’t have time. Which made it simpler: the most direct path to a positive attitude was to introduce a love story, which I did.

The client was a bit amazed at first, but then they understood that it was a clear and uncomplicated way to avoid the trap of dystopia. They had actually quoted a few sci-fi movies to me that they liked, mostly for their look, among them Gattaca. I do like that film, but man, it’s ever dystopian and gloomy. But, of course, the client didn’t want gloomy at all, understandably so. So I tried to lift a possibly dystopian ambiance into a joyful, energetic surrounding. And the key to that was the love story in its middle.

WWD: How was working with Felix and Gaia?

W.W.: Sheer joy. And sheer luck. I hadn’t known either of them before. I saw videos, excerpts from films or series they had done. And then I saw them in person. And I immediately liked the youthful presence both of them radiated. Still, both of them also had a certain sincerity to them. But who would have thought that it worked out so well? The two of them got along great, right off the bat. And we created a climate of shooting that allowed them to bring in some of their own selves, their own personas or idiosyncrasies, their own improvisations. They were a blast. I would not hesitate to work with both of them on a longer format.

WWD: How was shooting in a new Milan, which is very different from the postcard-like image of Italy?

W.W.: That was another challenge. I had decided to be in Milan two weeks before the shoot, so I could develop my script from places I would find in the city. The idea of a sci-fi surrounding depended entirely on finding the right places. So we looked for days and days. Nothing convinced me. There were a few futuristic places, but some were too well known, and some just didn’t give me any freedom to shoot. I need a 360 degree set, I can’t just shoot in one direction. And then there was this terrible and most depressing drawback: it was February! Milan can be very droopy and rainy and gray in February, especially in the middle of a pandemic.

And then I found this area around “City Life Park” and MiCo, the new Milan Convention Center. That was it, I knew at first sight. All we needed was sun. And hey, it was raining all through pre-production, and on the two days of the shoot, the sun was shining, and our places looked gorgeous, and fun and hopeful. Sometimes, you need a little help from the weather angels.