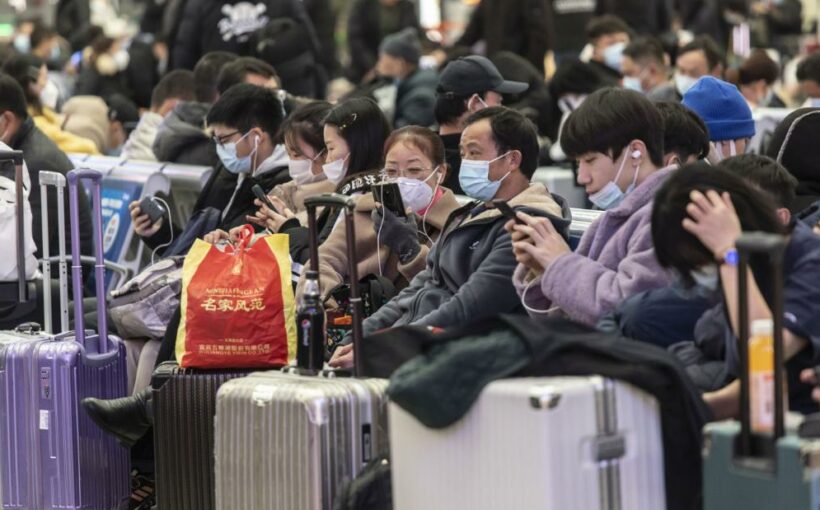 A version of this story appeared in CNN’s Meanwhile in China newsletter, a three-times-a-week update exploring what you need to know about the country’s rise and how it impacts the world. Sign up here.

Hong Kong (CNN)More than two years have passed since China sealed off an entire city of more than 11 million people to curb the world’s first Covid-19 outbreak.

But in many parts of the country, tough coronavirus restrictions are still making it difficult for people to travel just days before the biggest festival of the year.
Sunday marked the second anniversary of the start of the Wuhan lockdown — a drastic move that stunned the nation just two days before Lunar New Year.

China has long since recovered from the initial devastation wrought by the pandemic, while Beijing’s uncompromising zero-Covid policy — which relies on mass testing, extensive quarantines and snap lockdowns — has enjoyed widespread public support.

But with the prospect of another Lunar New Year homecoming canceled, some people are growing frustrated.

Known as Spring Festival in China, Lunar New Year — which falls on February 1 this year — is the most important time for families to get together, likened by some to Christmas, Thanksgiving and New Years combined.
Every year, hundreds of millions of people who have left their hometowns to build a life in China’s fast growing cities pour into trains, buses and planes to see their family — a weeks-long travel rush known as the largest annual human migration on Earth.
This year, China’s Ministry of Transportation expects 1.18 billion trips to be made during the Lunar New Year travel season, a 35% increase from last year — but still much lower than the 3 billion trips taken in 2019 before the pandemic.
And across China, a growing list of local authorities are discouraging residents from traveling to curb the spread of the coronavirus — especially the highly transmissible Omicron variant.

Last week, an official in the central province of Henan sparked an outcry after threatening to detain returning travelers.
In a viral video, Dong Hong, head of Dancheng county, was heard saying at a meeting that “anyone returning home from medium- or high-risk areas will be quarantined and then detained.”
Amid a firestorm of criticism, Dong later said he was only referring to people who don’t obey local prevention policies and “maliciously return home.” But many questioned how the desire to reunite with one’s family could be seen as malevolent.
“Is it wrong for a migrant worker who toils day and night, who lives far away from home, to return to his hometown and reunite with his family during his only few days of annual holiday?” asked a widely shared post on Weibo, China’s Twitter-like platform. “We can all understand the severity of the (Covid) situation, and we can abide the prevention and control rules, but we should also be able to fulfill our wishes to go home for the Lunar New Year.”
As the backlash mounted, even state media weighed in. “It is only human nature to want to return home for reunions during the Spring Festival, so why is it malicious?” the Communist Party’s official mouthpiece, People’s Daily, said in a social media post Saturday.
In a commentary Friday, state broadcaster CCTV accused local authorities of “deliberately creating obstacles and difficulties for people to return home,” adding that many were “ignoring the requirements of scientific epidemic prevention and control and adopting a one-size-fits-all approach.”
To be able to board trains, flights, buses and pass highway checkpoints, travelers in China must hold a green health code on their phone — indicating they have not recently been in any areas with Covid infections. But local authorities often impose their own requirements, preventing people from returning or subjecting them to lengthy quarantine even if their health code is green.
Last week, a worker in the southern metropolis of Shenzhen was traveling on a homebound train to Guangxi province when local authorities in her hometown told her that upon arrival she must spend a week in hotel quarantine followed by a week of home isolation, according to Chinese state media.
Unwilling to spend the festival in isolation at a cost of 2,100 yuan (about $330) for hotel quarantine, the woman got off the train and bought a ticket for the next one back to Shenzhen. 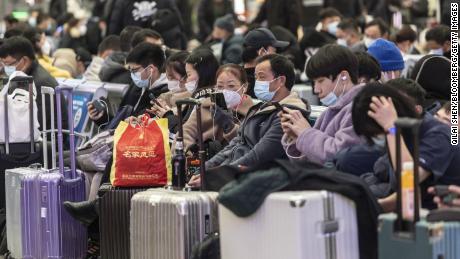 The stringent local restrictions partly stem from the tremendous political pressure for local authorities to prevent Covid flare-ups — often under the threat of harsh punishment should they fail. With the Lunar New Year and the Beijing Winter Olympics just around the corner, such pressure has only intensified.
In recent weeks, China has been grappling with a flurry of Covid outbreaks, from a Delta outbreak in the northwestern city of Xi’an to an Omicron outbreak in the northeastern port city of Tianjin. At one point, more than 20 million residents in three Chinese cities were under full lockdown, prevented from leaving their homes.
On Monday, Xi’an authorities announced the city is beginning to lift its lockdown, which had confined its 13 million residents to their homes for a month. The stringent measures had caused food shortages and denied medical care to critical patients, causing widespread anger among residents.
Beijing, scheduled to host the 2022 Winter Olympics from February 4, has reported 43 Covid cases since January 15. They include six Omicron infections — which authorities have blamed on mail from Canada — and a cluster of Delta cases in the southwestern district of Fengtai, which have spread to two nearby provinces. On Sunday, Fengtai launched a mass testing campaign, aiming to collect samples from its 2 million residents in one day.

The Chinese capital has advised residents against traveling home for the holiday, as have Shanghai and other big cities where a large part of the population come from the countryside or smaller cities.
In Dongguan, a southern manufacturing hub that’s home to nearly 7 million migrant workers, the government said it would give 500 million yuan (about $80 million) to non-local employees who stay in the city for Lunar New Year, with each person receiving digital vouchers worth 500 yuan, state media reported.
Source: Read Full Article