Home » Crypto » Bitcoin Bears Could Get More Stronger, Price Could Plunge Below $40K! 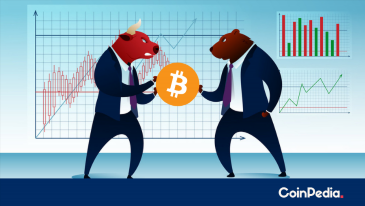 The cryptocurrency market has seen swings from the moon to the sea. Reports of enormous liquidations are coming to light. Bitcoin(BTC) price plunge to $45,488.25, while Ethereum(ETH) price is $3,341.35, at press time.

Analyst predicts the digital coin to fall below $40k and a negative trend in the price movements in the short term. Consequently, there are allegations from netizens that Microstrategy had been working on an exit strategy, by transferring its holdings to its subsidiary, to skip SEC filing.

Accordingly, speculations of the entire bull run being fuelled by Tether is making rounds. The speculation is further propelled as another $1 billion USDT was printed. It was also observed that many crypto exchanges went offline, or there was a halt in the withdrawals. Which users opine with the exchange firms trying to avoid getting liquidated.

One among other speculations is that the market started a reversal trend, hours before the announcement of Coinbase’s fight with the SEC. As a result of the insider’s dump.

Will Bitcoin(BTC) Price Ride Through The Wave?

However, the fall in the market has resulted in a lot of investors buying the dip. El-Salvador has bought 150 new coins after the dip, the country has also mandated the merchants to accept transactions in BTC alongside the USD.

Moreover, another news to lighten up the mood is The Republic of Panama introducing the bill for regulating crypto. The new bill in Panama aims to make BTC, ETH, and cryptocurrency a legal tender. Panamanian pro-crypto congressman Gabriel Silva stressed that crypto will create thousands of jobs. The acceptance of the digital currency by Nations is to joy for.

Summing up, the market could surge after a brief period of consolidation, with the fundamental investors in place, and growing acceptance of the digital currencies by nations. Meanwhile, an analyst has a firm belief that BTC will hit $100 despite the odds. With an increase in the purchase of dips, bulls might be chalking out plans.