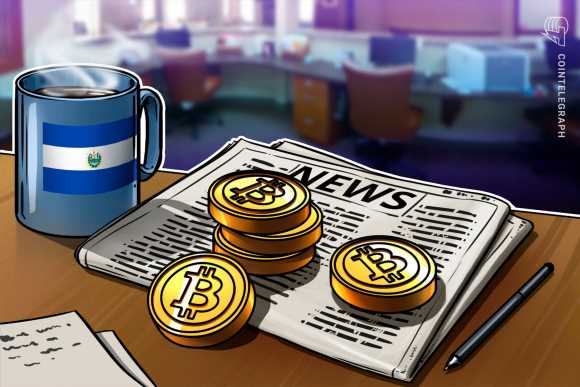 The news comes at the same time that Amnesty International accused the Salvadoran authorities of “flagrant violations of human rights and criminalizing people living in poverty.”

In a June 1 interview on the local “Frente a Frente” (Face-to-Face) news program Zelaya was asked if the situation with the $1 billion Bitcoin bond issuance from a “few months ago” had changed.

“No, not yet, the [Bitcoin] price continues to be disrupted by the war in Ukraine,” he said according to a rough translation. He added that “in the short term the variations are constant but in the long term it always tends to appreciate in value.”

“There is a future and there is an economic innovation [in Bitcoin] that we must bet on.”

The plan for the bond was originally announced in November 2021 by El Salvador’s president Nayib Bukele. Half of the $1 billion expected is to fund construction of a “Bitcoin City” built near a volcano with the idea that its geothermal energy could be harnessed for Bitcoin miners. The other half of the funds raised would be invested into Bitcoin.

The $1 billion bond was originally scheduled to launch in mid-March 2022 but ​in an interview in March Zelaya delayed the launch citing price volatility, giving a possible launch date around June with a timeline extending until September 2022.

Mounting fears that the country could default on an $800 million bond due in January 2023 caused rating agency Moody’s to downgrade El Salvador’s credit rating on May 4 citing “lack of a credible financing plan.”

El Salvador’s government has been buying Bitcoin since September 2021 with Bukele announcing the country purchased a further 500 BTC on May 9, El Salvador is estimated to have lost more than $35.6 million from its BTC investments so far.

A state of emergency (SOE) was declared by President Bukele on March 27 due to a rising homicide rate which the government blamed on gangs and organized crime. The SOE has since been extended twice.

The human rights group said the SOE changed laws and legal procedures which undermine the rights to defense, the presumption of innocence, effective judicial remedy and access to an independent judge.

Related: El Salvador’s Bitcoin play: What does the current slump mean for adoption?

During the crackdown more than 35,000 people have been imprisoned in less than three months with the increase in arrests causing 1.7% of the country’s population over 18 years old to be in detention, resulting in overcrowding of over 250% of the prison capacity.

But despite the abuses, many El Salvadorians agree with Bukele’s harsh measures as the President remains popular in opinion polls. The most recent poll released by local media on June 1st show a nearly 87% approval rate for the current president.