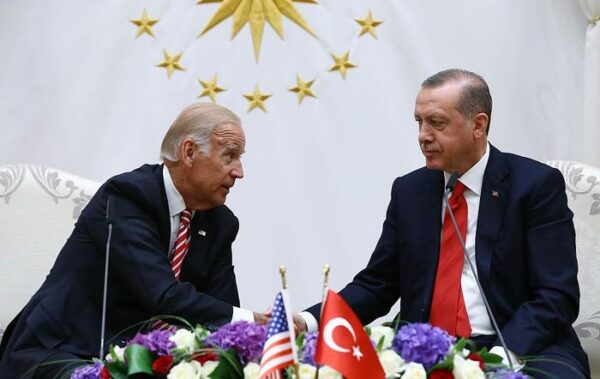 The Turkish Lira (TRY) neared a new low against the dollar following a decree by Turkey’s President, Recep Tayyip Erdoğan, this Saturday that announced the dismissal of the head of the Central Bank of the Republic of Turkey (CBRT) Naci Ağbal.

That was shortly after the central banker spiked interest rates by 2% in one go, bringing them to 19%.

Since his appointment in November he raised rates by 8.75% in what he called a “front-loaded” move to stop rising inflation.

He is of the view that high interest rates cause inflation, contradicting the conventional view that they stop inflation.

In the chart above we can see this debate play out, beginning in 2018 when a previous central banker, then Governor Murat Çetinkaya, was hiking interest rates ostensibly to stop inflation.

That brought an economic contraction and also higher inflation, with Çetinkaya dismissed in July 2019.

The new governor slashed interest rates, and we can see that almost perfectly mirrored in the inflation rate.

So Erdogan was right on this point according to these mirror charts, but then there’s a slight uptik in inflation which US media hinges upon to cry doom, so Erdogan appointed the now dismissed governor.

In addition there’s a third factor that needs to be considered here, and that’s the relationship between interest rates and foreign exchange rates.

It’s difficult to have these two graphs very well together, but we have some stability in both interest rates, inflation, and foreign exchange rates, until in 2018 all three spike.

We then have that sharp reduction in both interest rates and inflation, but the foreign exchange rate does not seem to respond.

We then have the sharp hike in interest rates and the pick up in inflation which leads to some gains in TRY, but no where near early 2018 levels and there’s a bounce off 7 TRY to USD.

There is therefore something else causing the fall in value of TRY and that something is presumably US sanctions where it concerns Turkey’s defence industry imposed in 2020 after sanctions and tariffs imposed in 2018 were lifted.

Presumably that’s the conclusion of Erdogan as well. Hence he’s now fired the governor appointed there to assure markets, and has replaced him with Sahap Kavcıoglu who recently said a rise in interest rates “indirectly cause inflation to rise.”

That the moves in foreign exchange rates would be caused more by foreign relations than internal economics, sounds somewhat self evident.

Where internal economics are concerned, Turkey is doing incredibly well. It is growing between ten to five percent a year, and it is the only economy besides China to show significant growth in 2020.

It is on the back of this astonishing economic performance that Erdogan has won election after election, but foreign relations are at a very interesting juncture.

In particular from a bird’s eye view, Turkey appears to have outmaneuvered both Russia and the United States where it concerns Syria and now potentially even Iraq.

Just like the United States, Turkey too has used ‘terrism,’ in this case PKK or FLO or whoever they are, to drum up both nationalism and expansionism.

They became a nation at war in 2016, and since then they have danced in an utterly complex concert that currently has the new President Joe Biden still hesitant to call Erdogan.

That’s presumably because how he deals with Turkey is an even more difficult decision than how he handles Russia or China, in part probably because he knows very well how to deal with the latter, while the US administration is probably uncertain in regards to the former.

In addition the US has to also consider whether they can even win within the pragmatic constrain of allocatable resources in light of all the other demands that there are for such resources.

Turkey neighbors many of these countries, and also shares somewhat of a similar culture, and once even ruled over them. Their outmaneuvering of both the US and Russia, therefore, perhaps shouldn’t be too surprising.

Thus neither is Biden’s hesitancy because it would be too easy to make a significant mistake which the United States currently can not easily afford if it is to focus on Russia and China.

In the case of the latter, the United States will presumably have to choose who to back. You’d think the answer would have to be European Turkey which is still a democracy as shown by Erdogan losing Istanbul.

That would go a long way towards addressing the fall in TRY which has been ongoing since 2018 when relations between US and Turkey started getting more tense, rather than anything to do with interest rates which don’t appear to correlate with TRY’s movements very much.

To address some of that loss in international purchasing power, many in Turkey have diversified with bitcoin, something that will probably continue until there is more clarity on both whether they can tame inflation as well as whether the United States chooses to mend relations.