Welcome to the latest edition of Cointelegraph’s decentralized finance newsletter.

As the calendar year comes to an end, Cardano’s personable leader Charles Hoskinson shares a message of optimism, unity and collaboration for the future of crypto.

As a gesture of goodwill for the holiday season, this week our long-form DeFi newsletter will be published in full here as an article alongside the regular email. Subscribe below for full access to next week’s edition!

Layer-two protocol Polygon announced this week the rectification of a potentially multi-billion-dollar vulnerability in its proof-of-stake Genesis contract through implementing an Emergency Bor Upgrade to the mainnet.

The incident and subsequent upgrade took place at the beginning of December. If compromised to the fullest extent by a malicious entity, the vulnerability could have resulted in almost $24 billion in financial losses, equating to 92.7% of the network’s native MATIC tokens and effectively causing imminent demise.

Following procedural investigation and authentication from Immunefi, the information was passed to Polygon, which upgraded the network on Dec. 5, albeit a hacker was able to drain 801,601 MATIC ($2.04 million) before the bug was resolved.

Polygon co-founder Jaynti Kanani emphasized the network’s ability to promptly resolve the critical bug, noting in a blog post that:

“What’s important is that this was a test of our network’s resilience as well as our ability to act decisively under pressure. Considering how much was at stake, I believe our team has made the best decisions possible given the circumstances.”

Leon Spacewalker is set to be rewarded a cool $2.2 million in stablecoins for their efforts, while the second anonymous hacker, Whitehat2, will pocket $1.27 million in MATIC tokens directly from Polygon.

Related: Here’s how Polygon is challenging the limitations of Ethereum, as told by co-founder Sandeep Nailwal

This week, in an end-of-year YouTube live stream titled “DApps and Cardano DeFi Alliance,” Cardano founder Charles Hoskinson spoke candidly about the emerging landscape of DeFi projects and creators on Cardano in addition to advising participants about the volatile nature of exponential markets.

“It’s very hard to do this kind of engineering and to do it right, with an eye and foresight for the future. Unfortunately, many of the projects in this space will not stand the test of time. It’s just a fact that we will see a great extinction occur in the next five to 10 years.”

Broadcasting with evident enthusiasm from “warm sunny Colorado” — a location which he humorously describes as “always warm, always sunny, sometimes Colorado” — Hoskinson predicted a big year ahead for the cryptocurrency space and his beloved Cardano.

The “only thing that holds us back is us,” he said before exclaiming that empathetic and friendly collaboration is a fundamental component to productive dialogue and progress toward our shared pursuit of a more prosperous financial future.

Following the successful launch of Cardano’s smart contracts in September through the Alonzo hard fork, the project has come under scrutiny for tedious developments on its roadmap. Despite this, Hoskinson believes that the user count will exceed 10 times the current 2 million in 2022 because of the vast demand within the nonfungible token space.

Alongside this, Hoskinson introduced the Cardano DeFi Alliance, an initiative that seeks to construct an open-source library of resources, tools, services and best practices to cultivate the growth of the entire DeFi ecosystem.

Huobi Research, the research arm of crypto exchange Huobi, has identified GameFi — which refers to the combination of gaming and decentralized finance — as an emerging trend based on its quantitative analysis of on-chain data.

The researchers noted that these games differ from traditional games, such as World of Warcraft, across three distinctive categories: free trading of game materials, free trading and pricing of game currencies, and protection of property rights.

Huobi Research argues that GameFi’s ability to “significantly reduce transaction fees for gold farming,” a term used to denote the conversion of in-game tokens to real-world currency, is the primary reason for its heightened financial appeal:

“In GameFi, the owners have the right to decide whether to sell certain resources or not, which lifts the degree of user independence and stimulates market competition, thus saving transaction costs.”

Additionally, developers in the GameFi space have the advantage of deploying private property rights via nonfungible tokens at a lower cost: “This not only is a comparative advantage that traditional game developers never had, but also reflects the intrinsic value of blockchain technology in the gaming industry,” the firm stated.

Analytical data reveals that DeFi’s total value locked has decreased by 1.8% during the week to $140 billion, seemingly slowing down for the holiday season. 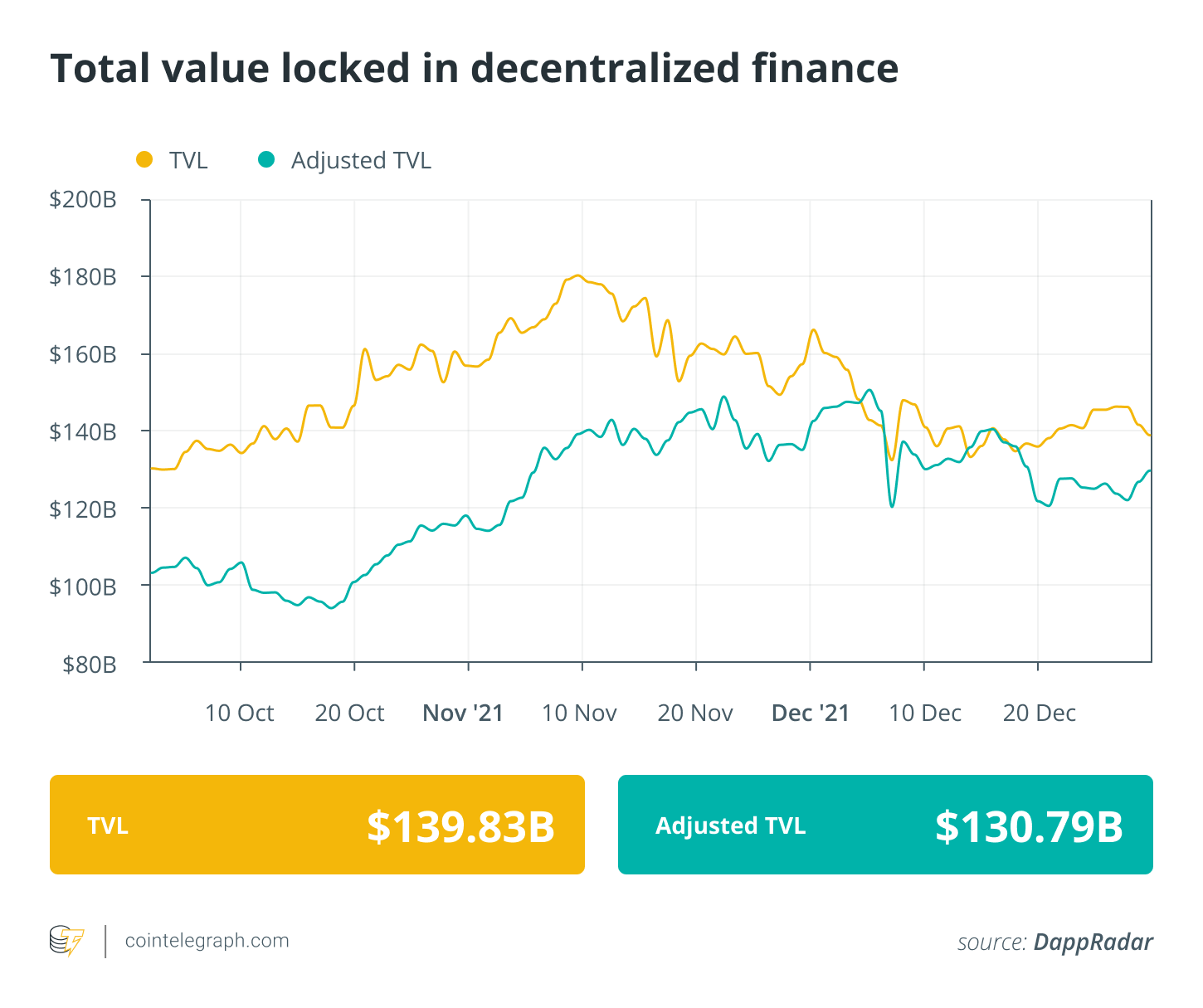 Data from Cointelegraph Markets Pro and TradingView reveals that DeFi’s top 100 tokens by market capitalization have mainly been bullish over the last seven days.

Interviews, features and other cool stuff

Thanks for reading our summary of this week’s most impactful DeFi developments. Join us again next Friday for more stories, insights and education in this dynamically advancing space. Happy New Year!