An outpouring of good fortunes continues to bless the paws of all SHIB believers as the hype-dazed Canine-themed meme coin set a new all-time high for both its price and market cap.

At about 3:54 AM on the 28th of October, Shiba Inu leaped astronomically from its long-held market cap range, which hovered around $30 to $35 billion over the last 40 hours, to land on a whopping $51.2billion. In a space of 10 minutes, SHIB raked in a massive $20 billion additional market leverage dashing past the bottom three coins on the global top ten cryptocurrency rankings and landing its highest ever rankings on the global table.

With its market capitalization upsurge came a juicy jolt in its price.

A vibrant $44.49 billion exchange volume in the early hours of yesterday, was all Shiba Inu needed to touch a new record high at $0.00008841. Hopes are now high with market participants expectant of a 1 cent debut around the corner. 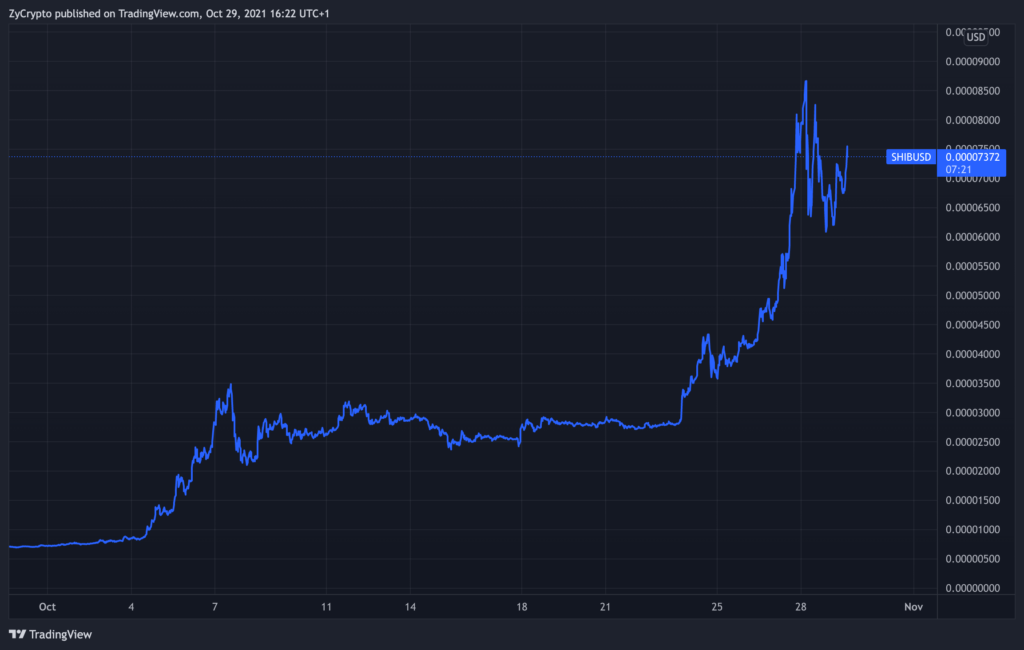 As of current standing, Shiba continues to hold strong the lead amongst top gainers and has flipped over 28.79 billion cash for coins to earn a positive 28% trading balance. Shiba is 13% up on an aggregate, over the last 48 hours and it appears the surge may have only just begun.

Analysis, according to Business Insider, reveals that much of the surge has been induced by addresses from so-called smart money cryptocurrency investors.

These are a class of crypto traders who take on an average of $100,000 daily by selectively mining targeted DeFis.

The index reveals that the month of October has seen dozens of new Shiba Inu transactions totaling over $1 billion at a go. By the last count, over $16 billion has been splashed on Shiba purchases over the last seven days.

With its latest growth, Shiba’s market value now ironically surpasses the trading exchange giant, Robinhood (HOOD) which is around $30 billion. It is now up to Robinhood to decide whether Shiba’s current growth spree is a healthy index to warrant its listing. All through the week, a petition to get Shiba onboard Robinhood has continued to circulate the internet and it appears the canine-themed army is keen on proving itself to Robinhood in more ways than one.

Some experts however worry that the current strings of successes recorded by Shiba aren’t a good sign, especially for wall street billionaire investors looking to test the crypto waters with the newly released Bitcoin ETF.