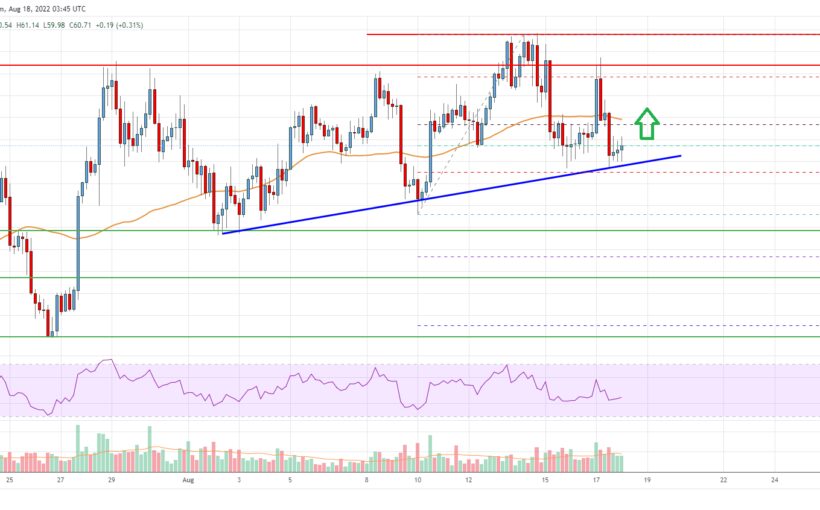 Litecoin price is consolidating above $60 against the US Dollar, similar to bitcoin. LTC price could continue to move up if it remains well bid above the $58 level.

In the past few days, there was a decent increase in bitcoin, ethereum, ripple, and litecoin against the US Dollar. Earlier, LTC formed a base above the $58 level and started a fresh increase.

There was a clear move above the $60 and $62 resistance levels. The price even climbed above the $64 level and the 55 simple moving average (4-hours). However, the bears were active near the $66 level. A high was formed near $65.79 before there was a downside correction.

However, the bulls were active near the $60 level. There is also a major bullish trend line forming with support near $60 on the 4-hours chart of the LTC/USD pair. The trend line is near the 76.4% Fib retracement level of the upward move from the $57.59 swing low to $65.79 high.

On the upside, the price is facing resistance near the $61.80 and $62.00 levels. A clear move above the $62 level could pump the price towards the $65 level. The next major resistance sits near the $70 level.

Looking at the chart, litecoin price is clearly trading below $62 and the 55 simple moving average (4-hours). Overall, the price could gain bullish momentum if it clears the $62 resistance zone.

4 hours MACD – The MACD for LTC/USD is now gaining pace in the bullish zone.

4 hours RSI (Relative Strength Index) – The RSI for LTC/USD is now below the 50 level.