In September of 2021, 2GB blocks have become a regular occurrence on the BSV blockchain. The first was mined in August 2021, where the block largely contained many copies of a picture of a dog. At the time (admittedly) I did not know what the purpose of this was but now am kicking myself as there was an opportunity to make money here.

I find it funny that this is still being chastised by both critics of BSV and their supporters as the users that uploaded this photo likely profited significantly. MetaCoin was launched in August 2021 as well, which rewards users of the MetaID suite of applications based on a pro-rated amount of data uploaded to the blockchain per day.

500,000 MetaCoin are awarded per day (which will halve like Bitcoin) so for now, the more data you upload over a period of 144 blocks, the more MetaCoin you earn. The interesting aspect is that the amount is pro-rated, turning the earning efforts into a competition. I believe this is the primary driver for why the network is averaging nearly 200MB per block as of writing as to keep earning the token (which is quickly rising in price) you must upload more and more data. 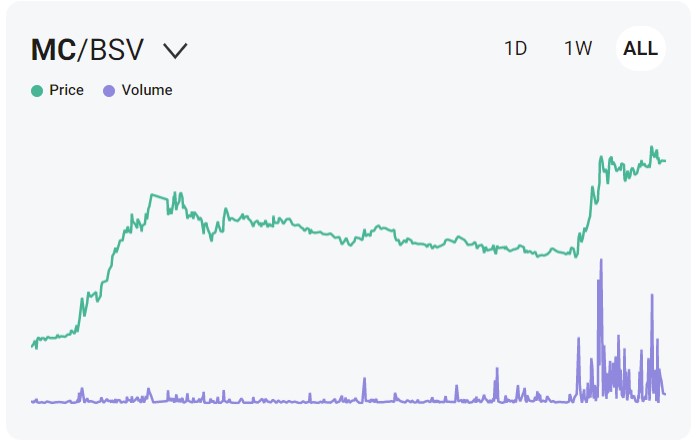 While this system is flawed in that it incentivizes uploading the same data repeatedly, the alignment of incentives created between users, applications and miners is airtight.

Users want to upload lots of data so they can earn from MetaCoin.

Applications want to enable users to upload data, so they can earn from charging a service fee.

Miners want more transactions so they can earn from the fees.

The impact of MetaCoin has been substantial in only one month because of this alignment of incentives. Imagine how strong this bond could be this time next year.

The other pieces that enable this system are the implementations of MetaID, atop the MetaNet protocol. When users sign up for MetaID, they have a single login across many applications providing what I think is the best user experience in Bitcoin SV. Users have a single ID so the Open MetaNet Foundation (OMF) can easily identify who to reward MetaCoin to based on their usage across multiple applications.

MetaID is an extension of Dr. Craig Wright’s MetaNet protocol, released in late 2018. As a developer in this space I admit having ‘slept’ on the protocol as after using and building on it, I now see how robust and well-designed the protocol is. Now as a participant and developer in that ecosystem I believe the MetaCoin will incentivize much more, and much more valuable data to be uploaded to the ledger.

While the reward distribution does not account for the same data being uploaded by the same user, I think in the long-term this is irrelevant. If the volume of data continues to increase such activity will no longer be profitable as more applications that enable mining of MetaCoin emerge, akin to how CPU mining of Bitcoin quickly became untenable. Applications like ShowBuzz who enable users to earn MetaCoin via the data they post, takes a service fee in BSV.

I recall when BSV first forked in 2018 many wanted to upload large videos, the Web Archive or replicate the Library of Alexandria on the blockchain. Now it makes economic sense to do so.