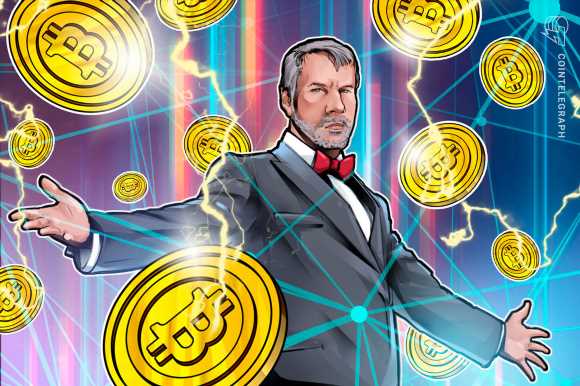 The executive chairman of MicroStrategy, Michael Saylor, does not like to be called out. He responded to a poll shared by Eric Wall, a crypto researcher, that suggested he had not used Bitcoin’s (BTC) layer-2 Lightning Network more than three times with a Twitter poll of his own.

Saylor replied to the poll with a resounding yes, and kickstarted a meme competition with a 1,000,000 Satoshis giveaway, or 0.01 BTC, worth around $200, to the most liked meme. In giving away Satoshi’s to prizewinners, Saylor will literally use the Lightning Network three times.

Other prominent Bifluencers, including Udi Wertheimer and Lilli, head of business development at Foundation Devices, regularly knock the LN. Lilli recently called the network a “failure,” and Udi said, “Nobody uses it.”

Wall shared a series of videos highlighting difficulties in transferring funds over the LN from old Bitcoin wallets to a new phone. He also predicted that Bitcoin capacity on the LN will not exceed 6,000 BTC before 2023. Bitcoin network capacity surged through 4,000 BTC in June and 5,000 BTC in October. With two months to go until year-end, Wall tweeted it’s “gonna be a nail-biter.”

Perhaps major companies entering the space will bolster LN usage and improve sentiment. Saylor is doubling down again on his Bitcoin strategy, as MicroStrategy is hiring Lightning developers.Furthermore, NYDIG, a leading Bitcoin company, announced in their Q3 report that “Now it’s time for Lightning,” stating their intention to contribute to the LN.

For smaller Bitcoin-first companies, deals are struck and announcements are made on a weekly basis. Strike recently led a successful $80 million funding round, while Galoy, the team behind El Salvador’s Bitcoin Beach wallet, has implemented dollars onto the LN — a boon for emerging markets. In Gibraltar, a highly sophisticated financial market, Lightning Network adoption is thriving.

Finally, in a recent panel discussion moderated by Cointelegraph in France, prominent Lightning Developers including “Dr. Bitcoin” himself, Christian Decker, as well as data scientist, Rene Pickhard mulled over whether transaction failure on the LN is acceptable in 2022.

The overwhelming sentiment from the panel that day is that the LN is still a work in progress. It’s neither a resounding success as it’s still early. For Nicolas Burtey, CEO at Galoy, the group behind the Adopting Bitcoin, a Lightning Summit in El Salvador, “The adoption of Bitcoin in El Salvador was the tipping point for Lightning.” The El Salvador Bitcoin Law hit its year anniversary one month ago.

In the meantime, there are now hundreds of memes in reply to Saylor’s tweet.

Cointelegraph reached out to Eric Wall, who declined to comment. Cointelegraph will update the article if Saylor, Wertheimer or Lilli share commentary.