S&P global vice chairman and energy expert Daniel Yergin said global copper demand will double from 25 million metric tonnes (MMt) currently to about 50 MMt by 2035 in order for the electrification technologies needed to decarbonise to be produced. 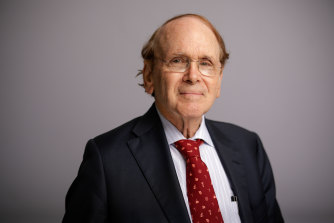 Pulitzer Prize-winning author and energy expert Daniel Yergin has advised almost all US administrations since President Richard Nixon was in power.Credit:Jason Alden/Bloomberg

“Unless new supply for ‘the metal of electrification’ comes online in a timely way, net zero emissions by 2050 will be short-circuited and remain out of reach,” the report said.

Copper is already the third-most widely used metal in the global economy and is a key component in electricity transmission, EVs and renewable energy technology such as solar panels, wind power and batteries.

But Yergin said output of the metal, which is also considered a bellwether for the global economy, would need to increase significantly and Australia can play a key role in achieving that.

“One of the biggest contributions that Australia could make towards climate objectives is by increasing its output of copper,” Yergin told The Sydney Morning Herald and The Age.

“Copper is the metal of electrification and it is the backbone for the energy transition.”

The report released on Thursday projects the “unprecedented and untenable” supply deficit – which could reach a 20 per cent shortfall by 2035 – will begin in 2025 and may become “a key destabilising threat to international security” as countries scramble to secure supply chains.

“The world has never produced so much copper in such a short timeframe as would be required,” Yergin said.

The study notes Australia is the sixth-largest copper miner in the world, while having the second-largest known reserves of the metal. China leads global copper refining and smelting capacity required to turn mined copper into usable metal, while also accounting for more than half of its usage.

Yergin – who has provided energy advice to almost all US administrations since Richard Nixon was president – said the report was “a wake-up call” for governments that have raised concerns about the availability of critical minerals needed to reach climate goals. 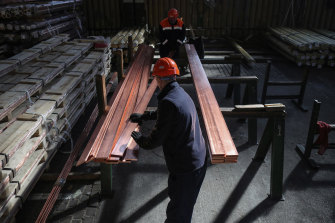 Copper is known as a bellwether for economic conditions and its price has fallen recently as interest rate tightening increases fears of a recession.Credit:Oliver Bunic/Bloomberg

“Australia has a significant role to play here and it means thinking about mining in a different way,” Yergin said.

Copper was not named on the Australian government’s list of 26 critical minerals released earlier this year, which include battery minerals such as lithium and cobalt. The metal was also not mentioned on the United States’ list released in February.

“I think that the lack of including copper as a critical mineral arises from not focusing or not understanding what the scale of the energy transition demands because it’s new and has happened quickly,” Yergin said.

“When it becomes clear how central copper is to the energy transition, and the pressures on supply, I think it’s likely that more and more governments will see it as a critical mineral.”

Report co-author and S&P Global Market Intelligence director John Mothersole said Australia had potential to become a key contributor of copper for the energy transition, although mine production had been “relatively stagnant over the last 10 to 15 years”.

The study found new mines would unlikely be able to account for the looming copper shortfall as the International Energy Agency estimates new developments take an average of 16 years.

Therefore, increasing existing mine output and copper recycling are left as the main sources of additional supply required meet demand in 2035, which the report says is a key date as clean energy and transport technology must be deployed “at scale” by then for the world to achieve net zero emissions by 2050.