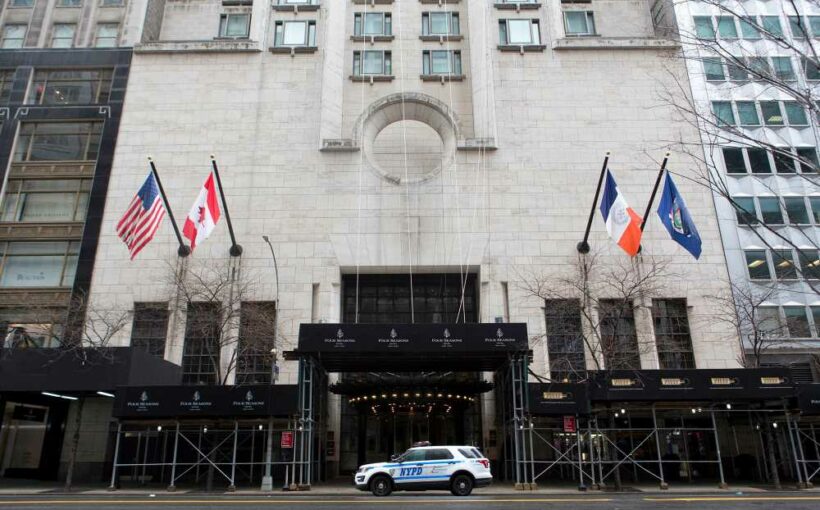 NYC paramedic could only give daughter ‘air hug’ on her birthday

‘I love you baby!’: Boy hilariously sings his way through getting a shot

The Four Seasons Hotels and Resorts may lose its iconic flagship on Manhattan’s exclusive Billionaire’s Row thanks to an ugly dispute involving the owner of Beanie Babies, The Post has learned.

The luxe 57th Street building, designed by I.M. Pei, has been a Four Seasons branded hotel since it opened 28 years ago with rates so high for that time — at $400 a night — that it quickly became known as the most expensive hotel in NYC.

Sources tell The Post that it’s now unclear whether the midtown Manhattan hotel will keep its famous name — thanks to a dispute with the hotel’s owner, Ty Warner, the creator of Beanie Babies, the plush toy that exploded into a cultural phenomenon in the late 1990s.

Warner owns the iconic Four Seasons Hotel New York through his Ty Warner Hotels and Resorts, where he is founder and chairman.

At issue, sources say, are management fees the Toronto-based Four Seasons Hotels and Resorts, which manages luxe hotels around the world, charges Warner’s company for running the property.

Warner’s company owes the fees to the Four Seasons management company regardless of whether the hotel makes money — and that has the two sides at loggerheads over their contract terms, sources said.

One reason may be that the iconic hotel has been closed since the pandemic took hold last year. It currently remains the only luxury hotel of its peers — including the St. Regis, Peninsula, Mandarin Oriental, Lotte New York Palace and The Pierre — to not have reopened as the economy bounced back.

The hotel first shut its doors to paying guests last March when it offered free housing for medical workers battling the frontlines of the coronavirus pandemic. According to its website, its has remained closed due to “substantial infrastructure and maintenance work that is expected to last well into 2022.”

The posh hotel’s once lively entrance on Thursday was dead, blocked off by the metal barricades commonly used for street parades.

Sources say the relationship between the hotel’s owner and operator had been fraying for years and that tensions were merely exacerbated by its declining profitability brought on by the pandemic.

“There are accusations on both sides and they are trying to work through them, but there is little trust at this point between the parties,” one source with knowledge of the situation told The Post.

Unless the dispute gets resolved, the property reportedly beloved by Lionel Richie and Jennifer Aniston could be converted to another hotel brand, said the source. The owner “has the right to terminate the management agreement,” this person said.

Warner did not immediately respond for comment. Four Seasons in a statement said the company “continues to proudly operate the hotel under the terms of its long-term management agreement,” but declined to address the dispute.

Warner bought the 52-story tower, the fourth tallest building in the US, with money earned from his Beanie Babies in 1999.

In recent years, the hotel’s average room rate has soared to more than $1,000 a night. The 4,300-square-foot Ty Warner Penthouse on the top floor has 360-degree views of the city from its four glass balconies and is considered one of the most expensive in the world, renting for $50,000 a night.

Warner, who is famously private, was sentenced in 2014 to two years of probation for tax evasion. He had maintained a secret offshore account in Switzerland, but avoided prison time for his philanthropic deeds, the judge said at the time.

Warner also owns the Four Seasons resort in Santa Barbara, but it’s unclear whether that agreement is also under dispute, sources said.