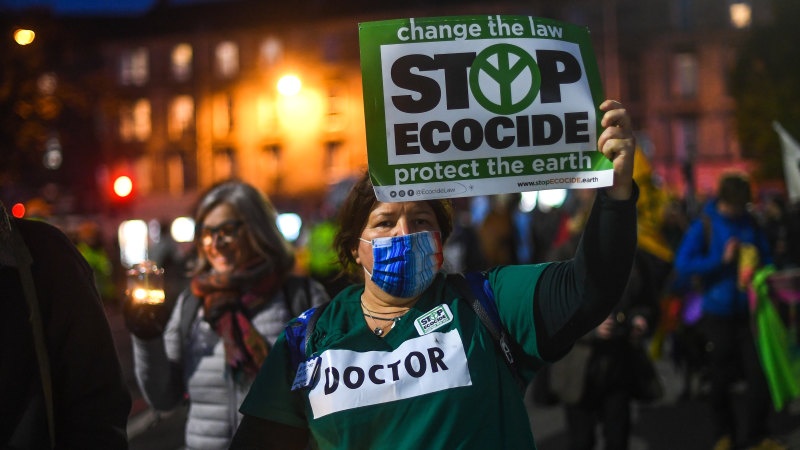 The climate movement has found its killer weapon in the war on fossils and the global multinational complex. It is mobilising human rights law to force through drastic decarbonisation and judges are playing along.

National pledges to reach net zero by 2050 are being rendered irrelevant in country after country by court action almost before the rhetorical words are uttered. 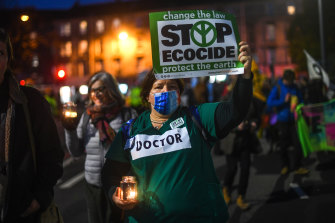 Green activists have been out in force in Glasgow. Credit:Getty Images

There has been a cascade of judgments based on the UN Convention, the European Convention on Human Rights or national constitutions. They are compelling governments to act faster than they had planned, or are capable of doing without resorting to revolutionary economic and social measures. The critical ingredient that makes it possible is the “soft” law of COP climate agreements.

You can see why negotiators in Glasgow must wrangle over every word in the COP26 text, seemingly like medieval bishops disputing how many angels can fit on the head of a pin. Those words can and will be thrown back at them by a judge somewhere.

The press never noticed the insertion of an innocuous phrase in the Paris Agreement on “non-party stakeholders”. It has been legal dynamite in the hands of guerrilla lawfare squads. These COP summits are more binding than you might suppose.

If you are a board member or the chairman of a company that has drawn the wrath of the Green Guards, watch out, for they are coming after you. They intend to make you personally liable for emissions that exceed a reasonable definition of what is needed to hold global warming below 1.5C.

Ultimately they aim to make an example of arch-offenders in “ecocide” trials at the International Criminal Court in the Hague. The purge is escalating fast.

The shock troops were in Glasgow this week at the People’s Summit dressed in dazzling white garb (thanks to fashion sponsors), distributing a manual in English, French and Spanish for activists gathered from across the globe. The punchy guide is called DIY: How to sue a company like Shell?.

It draws on the legal tactics used to defeat Royal Dutch Shell in the Milieudefensie case in May, when a court in the Hague ruled that the company had to cut its emissions by 45 per cent across its 1,100 subsidiaries before the end of the decade, and must start immediately before exhausting the appeals process.

“It was the tobacco moment for oil and gas, and it has already been replicated in 30 or 40 cases across the world. The next step is to take on the financial institutions and pension funds that are financing our ruin,” said Roger Cox, the lead Dutch lawyer in the case.

“If board members are blocking action this will lead to directors’ liability cases in the near future. No large company should be in the business of violating human rights.”

The dam broke with the landmark Urgenda case in December 2019 when judges ruled that the Dutch state was in violation of international human rights law, forcing the government to cut emissions by an extra 5 per cent in one year, the fastest decarbonisation ever in a complex industrial nation. Three coal plants built in 2015-2016 without carbon capture – in defiance of the Paris accord, and in a rare case of Dutch lunacy – were instantly rendered stranded assets, or very nearly.

The climate lawyers have been working their way up through the gears ever since, widening the targets and the geographical reach. They were out in force in Glasgow spreading the legal gospel.

Lisa Gertner from Greenpeace in Germany recounted how her branch defeated Angela Merkel’s government in the now famous case of Sophie Backsen, a 22-year-old organic farmer on the Baltic island of Pellworm.

The German Constitutional Court ruled provisionally in April that the country’s climate act was not aligned with Paris and may be unconstitutional. There are parallel cases in France – both against the Macron government and Total – as well as in Italy and Poland. A crowd-funded campaign by Global Legal Action Network (GLAN) is suing 33 European governments at the European Court of Human Rights for violating the rights of Portuguese children.

As a practical matter, the world’s 186 trillion dollar economy runs on fossil energy, nitrogen fertilisers, etc. While renewables are already cheaper on pure cost in many regions – and will over time become much cheaper – you cannot replace the legacy infrastructure overnight.

The Korean Climate Litigation group is taking a different tack, arguing that its Government’s CO2 plans up to 2030 are not sufficient to avert dangerous warming, and would imply a 3 to 4 degree world if every country behaved in the same way. It argues that this breaches clauses on intergenerational equality in the Korean constitution.

There is a “duty of care” case under way in Australia over the Torres Strait Islands, which could reach into the Anglo-Saxon jurisprudence of the US, Canada, and the UK. There are cases sprouting all over Latin America. The Grantham Institute says there were 1,841 climate action cases worldwide as of May.

In one sense the litigants are obviously right. If you accept the climate science – and that is the agreed position of mankind, through 195 states – emissions must be shut down by the mid-2030s. But the danger of government by judges is also obvious. They are not elected or accountable. 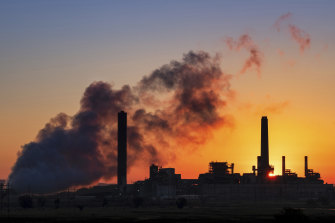 The world will still be reliant on fossil fuels for some time.Credit:AP

By going after listed oil majors such as Shell, they shift the worst assets into the hands of bad actors operating in the twilight zone. They move gas production to cowboy operations with 30 times the methane leakage of the well-behaved.

The Western oil and gas majors have the engineering depth for the big post-carbon projects that we need, but they can only invest in these while drawing on legacy fossil rents. Is it advisable to divert these rents to carpet-baggers?

As a practical matter, the world’s $US186 trillion ($253 trillion) economy runs on fossil energy, nitrogen fertilisers, etc. While renewables are already cheaper on pure cost in many regions – and will over time become much cheaper – you cannot replace the legacy infrastructure overnight.

Milieudefensie’s lawyer Roger Cox said his Shell case has already raised the market borrowing cost for the whole fossil complex, and it has pinned an asbestos tail-risk warning on their backs. He is right. Big Money will no longer fund Big Oil.

This has created an annual investment deficit of $US600 billion or more in the energy system. We are therefore careening straight into a fuel crunch over the early 2020s. This autumn’s squall has been a picnic compared to what is coming.

So what these brilliant legal warriors must ponder is whether they might not provoke a thunderous backlash, ending in the election of more Trumps and mini-Trumps, and a collective withdrawal from the global human rights conventions that make their lawfare possible. Is best the enemy of good?

This debate is not to be heard at the Glasgow People’s Summit. The activists aim to bring down the whole citadel of fossildom immediately, and then to worry about the consequences later.

My emotions are with them. My head is not.

Get weekday updates on the climate summit that will shape our future. Sign up to our COP26 newsletter here.