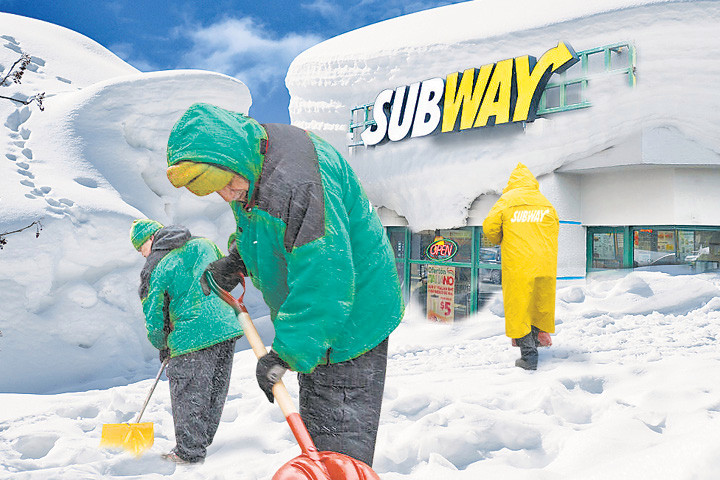 Subway franchisees air their beef with owner amid sale rumors

Subway Restaurants is making move south to Miami from Connecticut

Subway Restaurant store owners are seeing red over onerous new rules they say could require them to keep their doors open even during a snowstorm, electrical outage or terrorist attack.

Subway stores that close more than once a year without permission barring “an act of God” — a strict legal term that tends to include only the most severe of natural disasters — risk being taken over by the Milford, Conn., company headed by ex-Burger King CEO John Chidsey, sources said.

The restaurant chain — which grew to popularity with its $5 footlongs — is allegedly making these and other new demands via new 20-year contracts it started handing out last month.

Franchisees who choose not to agree to sign their stores in the event of a non-qualifying emergency away will be required to fork over 10 percent of their gross revenues to headquarters, sources said.

The push has some store owners threatening to walk away from the company co-founded by Fred DeLuca in 1965.

“I’ll start systemically shutting them down,” a Northeast franchisee told The Post of the new demands, the details of which were also outlined in a recent report to members of a Subway franchisee association by law firm Dady & Gardner, a copy of which was obtained by The Post.

Other terms of the new contracts being handed out to new franchisees and current franchisees whose 20-year contracts are coming up for renewals include:

Experts say the most onerous change will likely be Subway’s demand that restaurants stay open unless permitted otherwise, with only one exception being made every 12 months.

While Subway plans to be lenient on stores that have suffered an “act of God,” experts say that’s legal jargon for only the most severe and unexpected of natural disasters, like a flood or an earthquake.

It’s unlikely, they said, to protect franchisees from snowstorms, electrical outages or even acts of terrorism.

“When I was a franchisee, my Subway was just outside the 9/11 frozen zone. Since terrorism would not be an act of God under NY law, if this new franchise agreement had been in effect, Subway could have taken my store,” said Paul Steinberg, an attorney who also used to own a New York Subway restaurant.

Steinberg said that when he was running his Subway, he aimed to open every day, even on holidays. But it was impossible.

“Often on holidays such as Thanksgiving and Christmas, nobody wanted to work — even at double or triple pay — and so I and my partner worked and skipped our family gatherings but even with that, we would have times when the snowfall was such that we would not open,” he said.

“In a place like New York, you might be closed two days per year due to snowstorms,” he said.

Subway acknowledged that it has changed the terms of its franchisee contacts for the first time in 20 years.

It also acknowledged that franchisees who choose to not sign the new contracts will be forced to give up a larger cut of their sales.

“The royalty rate would increase to 10 percent for franchisees who elect to remain on the old form of agreement when their renewal came up. It’s important to note that this is NOT a new royalty increase that we’ve implemented,” Subway said.

The upheaval comes amid rumors that Chidsey, who took the helm in late 2019, has been cutting costs, including moving operations to Florida from Milford, Conn., in an effort to gussy up the company up for sale.

Restaurant consultant John Gordon, who also saw the Dady & Gardner report, theorized that Subway is making a bet that the average franchisee will not shutter in face of the new contract terms, but rather agree to fork over higher royalty fees.

“What I think they are doing is creating a franchise agreement so draconian that franchisees will have no choice but to pay the 10 percent royalty fees” rather than accept the new terms.

And that, he said, could help the retailer pay for the growing number of leases it has piling up tied to shuttered stores.

Subway, which is responsible for franchisee leases, has suffered more store closings than openings since reaching a peak of 27,103 restaurants in the US in 2015.

Over the last three years, a net 14 percent of US Subway restaurants have closed, resulting in a 26 percent decline in royalty payments, according to public filings. Last year, Subway reported 1,601 net US store closings, bringing the total number of US locations to 22,201.

The Subway franchisee who told The Post he’d rather shutter his stores than agree to the new terms says eight of his stores have 20-year contracts coming up for renewal in the next 18 months.

He could sell those stores, but doesn’t see a buyer accepting the onerous new contracts or jacked up royalty fees. And he can’t afford to operate the eateries under these conditions. As it is, only half of his restaurants make money.

“I built this. As I start looking back, I wonder was it worth it?” he asked, reflecting on the long hours he has put in and family time he’s missed. “You can’t get out because no one wants to buy these stores.”

Franchisees posting on a private blog moderated by the North American Association of Subway Franchisees, the membership group behind the Dady & Gardner report, expressed similar feelings.

“The agreement kills any chance to sell our stores,” a Wisconsin franchisee said.

“Subway is not in line with their competitors on this, they just want all the control they can get,” an Alabama franchisee said. “Pure insanity!”

“I’m 100 percent over this,” a Pennsylvania franchisee said. “This is not what I signed up for and I’m only four years into being a franchisee.”

Ironically, franchisees who agree to the new contracts may no longer be able to post their criticisms of Subway on NAASF’s membership forum.

Steinberg, who also reviewed the Dady & Gardner report, agreed that Subway appears to be orchestrating a money grab.

“To me, this looks like a maximum milking of the cash cow with no regard for maintaining a working relationship with franchisees … or even any regard for the long-term health of the franchisor. This would be irrational to the point of verging on bizarre, but the pieces fit,” Steinberg said.

He theorized that Subway, which saw sales hit hard during the pandemic, may be concerned about its own sales prospects.

“Co-owner Dr. Peter Buck, I think he soured on the growth potential of the Subway brand long ago,” Steinberg said. “He is a smart guy and may figure that if Subway cannot find a buyer it is fated to a long and irreversible decline. In that case, it may actually be smarter to collect more revenue upfront even if it accelerates the inevitable decline.”