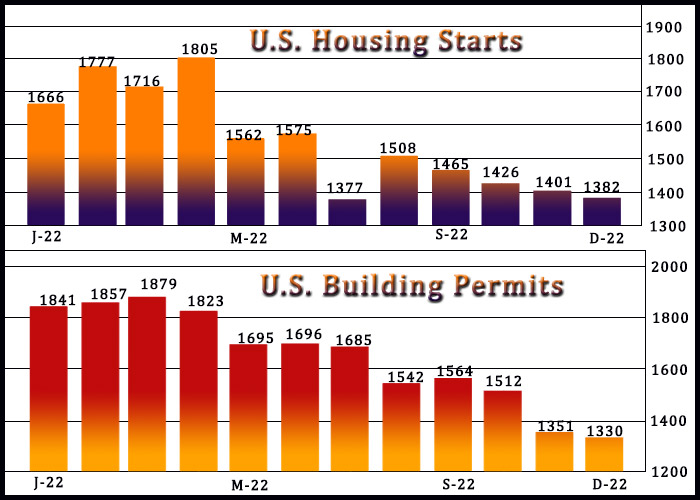 New residential construction in U.S. fell for the fourth straight month in December, according to a report released by the Commerce Department on Thursday, although the decrease was much smaller than expected.

Economists had expected housing starts to plunge by 4.8 percent to an annual rate of 1.359 million from the 1.427 million originally reported for the previous month.

The extended decline in housing starts came as a surge in single-family starts was more than offset by a nosedive in multi-family starts.

Building permits, an indicator of future housing demand, were expected to jump by 2.1 percent to an annual rate of 1.370 million from the 1.342 million originally reported for the previous month.

“The more forward looking permits data suggest further softness in starts Q1,” said Nancy Vanden Houten, U.S. Lead Economist at Oxford Economics. “However, after declining nearly 22% in 2022, we think the worst of the downturn in housing construction is behind us.”

On Wednesday, the National Association of Home Builders released a separate report showing an unexpected improvement in homebuilder confidence in the month of January.

The report said the NAHB/Wells Fargo Housing Market Index climbed to 35 in January from 31 in December, while economists had expected the index to come in unchanged.

With the unexpected increase, the index rebounded from its lowest reading since mid-2012, with the exception of the onset of the pandemic in the spring of 2020.