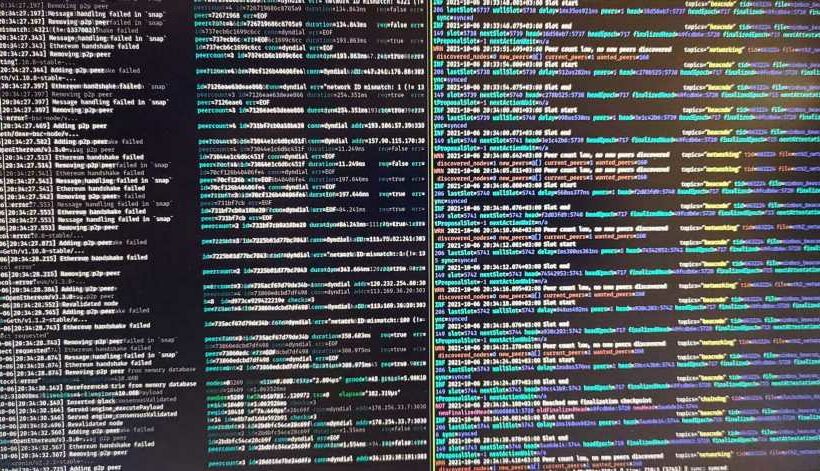 “Nimbus and Geth syncs with hacknetv2 – a merged testnet running Geth and Lighthouse along with several other client combinations!” – says Jacek Sieka of Status which runs the Nimbus eth 2.0 client, with that sync pictured above.

“Lighthouse+Geth and Lodestar+Geth can maintain a persistent Ethereum 2 test network with transaction execution and all. Working on getting Nimbus+Geth onto the testnet and integrating Teku with Geth.”

Back in May, a one day devnet was held to get eth1 and eth 2 clients to ‘talk’ for the merger. That however “quickly fell into numerous forks,” as we reported at the time.

Now five months on and four days later, all these different clients apparently not only can talk, but can keep on talking.

“Multi-multi is within reach,”Sieka says. That presumably means there will be a public full on testnet, but perhaps just for devs to begin with, and then shortly after one where all can participate.

The Merger will be a very big event, and there’s a lot at stake, so you’d think the full on testnet will run for at least three months with rehearsals for the actual event and then the live launch.

Going by the fairly big success in this hacknet where all the different clients managed to keep talking without breaking into forks, it appears that preparations for the beginning of the rollout of the live launch are not far off.

We’ll get a better idea once a public testnet launches, with the best estimate there being months, not years, presumably.

Yet, somewhat quicker than realistically expected with Danny Ryan, the ethereum 2.0 coordinator, stating last week that “the Merge is coming.”

The Merge as you might know is the combination of what currently are two networks, the Proof of Work (PoW) ethereum 1.0 that runs pretty much everything in regards to defi, NFTs, etc., and the Proof of Stake (PoS) ethereum 2.0 Beacon chain that Vitalik Buterin, ethereum’s co-founder, once described as a “dumb” blockchain.

It will soon be made “smart” by directing clients to ‘take orders’ from stakers rather than miners, at which point the two networks merge with stakers then solely responsible for running everything.

Miners will be discarded and effectively will no longer exist in ethereum after the Merge. So making it the biggest event in eth since it launched economically speaking as new supply will be reduced by 4% of the total supply, with it afterwards running at 0.2% to 1% probably in perpetuity now that there’s the burning.

Combined with the burning, ethereum will then either have pretty much no new supply or will even have decreasing supply with the two oscillating depending on network usage.

Thus in some ways ethereum will manage to both reward nodes that run the network through inflation, while also maintaining a finite or even a deflationary supply.

The only downside is that the Beacon chain is more fragile than the Proof of Work system because if 33% of the nodes fall off, it stops moving.

As the recent events in bitcoin showed when China kicked out the miners, the Proof of Work network can keep running even if in the extremis 90% of the mining nodes fall off.

However it would be slow and very congested, with ethereum 2.0 also having mechanisms that start discounting nodes which have fallen off, making the end user experience realistically roughly the same in that they may have to wait a bit if they want to transact until the internal mechanisms readjust.

On the plus side, Proof of Stake is very environmentally friendly with the asset from an investment perspective becoming dividend yielding.

So soon cryptos will find themselves in a very interesting environment where the top two assets run on different consensus methods and have different tokenomics prior to both effectively freezing thereafter with substantial development moving more to second layers.

After the Merge, the only thing left for eth would be data sharding, but the structure would be generally set in stone as Nakamoto once said of bitcoin.

There won’t be difficulty bomb delays or tweakings of block rewards or much of what at times made bitcoin’s finite supply a contrast as eth will also reach that certainty where tokenomics are concerned.

So making this Merger more eth moving towards its final form where the protocol layer is concerned, and as this devnet shows, that’s now just months away.