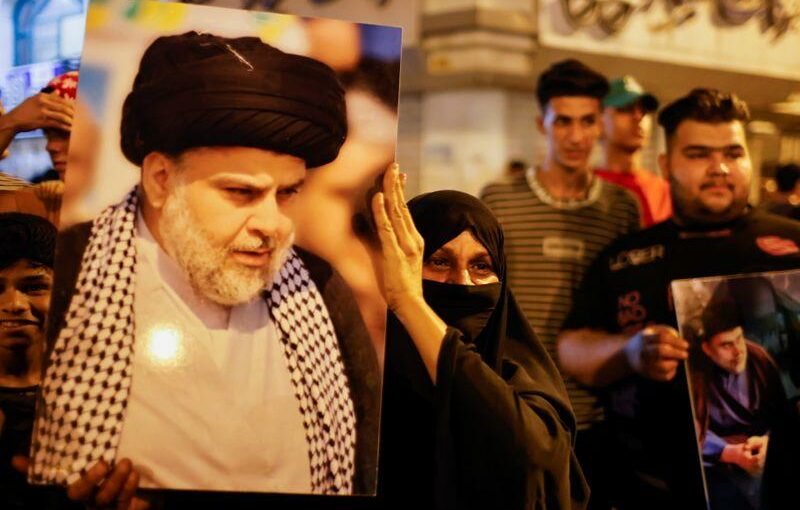 BAGHDAD (Reuters) – Iraqi voters delivered a sharp rebuke to Iran’s allies in an election this week, but loosening the grip of Shi’ite militia from control of the state will still be a politically delicate goal, with the threat of violence always in the background.

The main winner of the election was Shi’ite cleric Moqtada al-Sadr, a populist who has positioned himself as a staunch opponent of both Iran and the United States.

Sadr proclaimed the result a “victory by the people over … militias”. There was elation among his supporters.

“The most important thing in this election is that foreign countries like Iran didn’t interfere in the vote,” said Yousef Mohammed, an unemployed 21-year-old in Sadr’s vast Baghdad stronghold of Sadr City. “We’ve been celebrating since last night.”

Sadr’s bloc, already the biggest in the 329-seat parliament, will expand to 73 seats from 54. Its main rivals for years, the Fatah bloc of factions linked to pro-Tehran militia, meanwhile, saw its parliamentary representation collapse — to just 14 seats from 48.

An unusually unified Sunni Muslim bloc placed second, giving the minority sect perhaps its strongest leverage since the fall of Saddam Hussein. And even upstart groups of reformists who campaigned against the ruling elite managed to defy predictions that they would be outmanoeuvred by established parties: a bloc headed by a pharmacologist emerged with ten seats.

Yet there are still signs that Tehran’s grip on the country remains formidable. Most notably, former Prime Minister Nuri al-Maliki, a friend of Iran who campaigned as a champion of law and order, also won big surprise gains, emerging in third place with 37 seats.

A Western diplomat said the leader of Iran’s Quds Force, Esmail Ghaani, was in Baghdad while the initial results were released, still seeking a way to keep Tehran’s allies in power.

“According to our information, Ghaani was attending a meeting with (Shi’ite militia parties) yesterday. They will do whatever they can to try to organise the biggest bloc – although that will also be very difficult with Sadr’s power,” the Western diplomat said.

A woman holds a picture of Sadr’s movement leader Moqtada al-Sadr, as his supporters celebrate after preliminary results of Iraq’s parliamentary election were announced in Baghdad, Iraq October 11, 2021. REUTERS/Thaier Al-Sudani

Tehran and Baghdad both publicly denied Ghaani was in Iraq, but two Iranian sources contacted by Reuters confirmed it.

At least one pro-Iran militia commander said the armed groups were prepared to resort to violence if necessary to ensure they do not lose their influence after what they view as a fraudulent election.

“We’ll use legal frameworks for now. If unsuccessful we’ll have to go to the streets and do the same thing that was done to us during protests – burn party buildings” of the Sadrists, he said.

Iraq has been a proxy battlefield for influence between the United States and Iran since the 2003 U.S.-led invasion, which toppled Saddam and created a path to power for a Shi’ite majority led by figures courted for decades by Tehran.

In 2014, when a third of Iraq was captured by fighters from the Sunni Muslim group Islamic State, Washington and Tehran found themselves uneasily on the same side: both providing assistance to Baghdad to fight the militants.

But when Islamic State was defeated in 2017, it was Iran that came out ahead. Factions linked to pro-Iran militias emerged with control over much of the Iraqi state.

That triggered a backlash in 2019, with hundreds of thousands of mainly young Iraqis taking to the streets to protest against corruption, joblessness and foreign influence. Security forces and the militia gunned down 600 of them. A prime minister close to Iran was forced to quit, paving the way for this week’s early election.

Sadr, scion of a family of revered clerics including a father and uncle both murdered under Saddam, has emerged as a rare foe of both Washington and Tehran, first leading a Shi’ite uprising against U.S. occupation and later campaigning against Iranian influence.

While he has always held back from playing a leading role in governing coalitions, his followers have quietly secured control of ministries and industries in governments headed by other Shi’ite factions, most with ties to Tehran.

But most of Iraq’s Shi’ite political establishment remains suspicious or even hostile to Sadr, including commanders of the security forces who battled his followers in the past. This may have helped Maliki, who as prime minister led a campaign more than a decade ago that successfully wrested southern cities and Baghdad districts from Sadr’s followers.

Hamdi Malik, specialist on Iraq’s Shi’ite militias at the Washington Institute, said Maliki had spent a lot of money campaigning and appealed to nostalgia among the armed forces, emphasising his own image as a strong leader.

One official from the Badr party, long one of the main pro-Iran factions, said one of the reasons for the poor showing of the militia’s Fatah bloc was that supporters shifted their votes to Maliki, viewing him as a more effective bulwark against Sadr.

“Maliki already showed he can stand up to Sadr,” the official said.