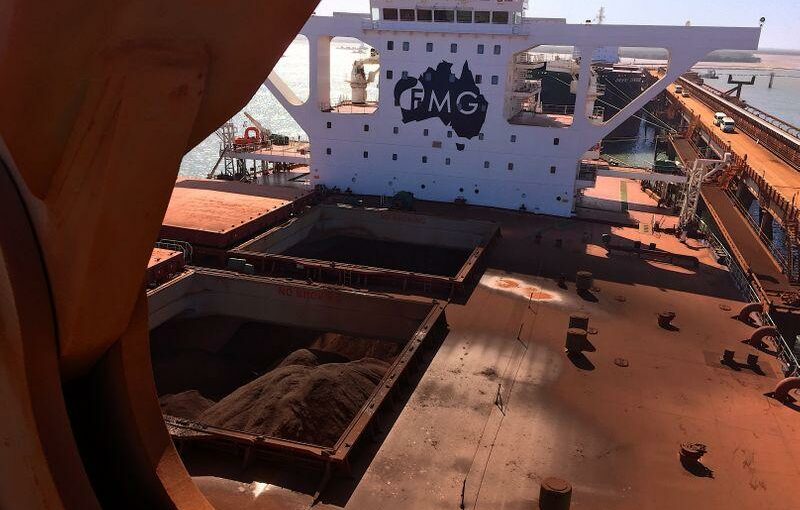 FILE PHOTO: The logo of Australia’s Fortescue Metals Group (FMG) can be seen on a bulk carrier as it is loaded with iron ore at the coastal town of Port Hedland in Western Australia, November 29, 2018. Picture taken November 29, 2018. REUTERS/Melanie Burton

The world’s fourth-largest iron ore miner now expects the total project cost to be $3 billion, $400 million more than its previous estimate, and postponed the timing of first production to the second half of 2022 from the first half.

The project is expected to deliver 22 million tonnes when fully ramped up.

As part of a review of the high-grade ore project, a crucial part of Fortescue’s strategy to upgrade its products and win market share, the company earlier this week announced the departure of its chief operating officer and two other executives in its iron ore division.

The update was made in the miner’s first-half earnings report on Thursday in which it nudged up its annual shipment forecast and reported a 66% jump in profit.

“I think what has happened in the past 24-48 hours does give the market some pause on its plan to deliver on new projects, new technologies overseas,” said analyst Glyn Lawcock of UBS.

“(But) the market was pleasantly surprised by the fact they got a good payout. I think the market has been concerned with the blowout in capex for Iron Bridge, the commitment to spend more on renewables and so that the dividend could be curtailed,” he added.

Fortescue also declared a higher-than-expected interim dividend of A$1.47 per share, up from A$0.76 last year, joining peers BHP Group and Rio Tinto in feeding gains from strong iron ore prices back to investors.

China’s focus on infrastructure last year drove a more than 50% rise in the price of iron ore, which reached a record in December on China’s Dalian Commodity Exchange.

The payout sent a A$1.65 billion windfall to the company’s largest shareholder, Andrew Forrest who is Australia’s second richest person with a net worth of A$23 billion, according to Forbes.

Net profit after tax for the first-half was $4.08 billion, up from $2.45 billion a year earlier. This was in line with a consensus of $4.09 billion from 10 analysts compiled by research firm Vuma Financial.

Fortescue said it would allocate 10% of net profits after tax to fund renewable energy growth through its new unit, Fortescue Future Industries (FFI) and 10% to fund other resource growth opportunities.